WHAT'S IT TO B? (some text hidden)

Mercedes-Benz launches a lot of cars. Just take a look at the number of different product lines it has on its books. Most of them are unreserved success stories, but once in a while a problem child emerges. Step forward the B-Class. In no way a bad car, the B-Class never really recovered from its tough start in life. It's one of those vehicles that, as a consequence, makes a much better used buy than new purchase. Here's what to look for.

When it comes to automotive innovation, no company gets remotely close to Mercedes-Benz. Despite its conservative image, Mercedes is a company of great engineering boldness. It never went out on a limb quite as far as it did with the A-Class, a car packed with clever ideas that unfortunately fell over. The response to this problem was, if anything, even more impressive, Mercedes issuing a mea culpa and engineering a solution in record time. By then, however, the damage was done. The A-Class was a damaged good and the B-Class which stemmed from the much improved second generation A-Class faced an uphill task in convincing customers of its worth. Bigger and more expensive than the A-Class, it debuted in 2005 and seemed to be a cross between a conventional hatch and a mini-MPV but as the latter market migrated to seven-seat cars, the five seat B-Class again looked slightly out of step with public opinion. As a result of this and pricing which looked optimistic, sales were slow. The range was facelifted in 2008, with a restyled bonnet, front bumper, rear tail lamps, side exterior mirrors and interior trim finishes, and replaced in 2012 with an all-new B-Class Tourer.

The Mercedes wins some credibility with its clever seating system, but with one outrageous caveat. Having forked out a serious amount of money for a B-Class, Mercedes had the chutzpah to demand another £205 for the EasyVario seating system, which allows the rear and front passenger seats to be removed. Make sure any used example you look for includes this useful feature. The boot has a clever double floor which can create a flat loading surface to the folded rear seats. With a 506 litres of boot space available, the B-Class isn't one of those vehicles that forces you to choose luggage or legroom. Maximum luggage capacity to roof level with the seats folded is a massive 2205 litres. Do bear in mind that if you specify front sports seats, you must forgo the folding front passenger seat back as the beefier side bolsters preclude it sitting flat. Doing without the space-saver spare wheel and opting for a puncture repair kit instead frees up another 40 litres of luggage space although I'd think twice about this, having been stranded a couple of times with punctures too serious for repair kits to handle. 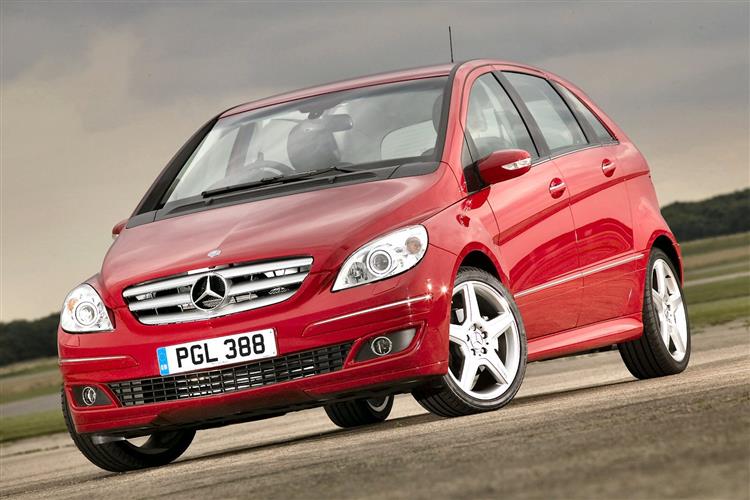