THE WONDERFUL THING ABOUT TIGUANS (some text hidden)

The booming compact 4x4 market in the early years of the 21st century prompted a number of car manufacturers to do something completely out of character - they built compact 4x4s. Some held out longer than others but as sales of these downsized off-roaders stuck to their upward course, it became too costly for the big names not to try and grab a slice of the pie. Like Renault, Citroen, Peugeot and others, Volkswagen had little pedigree in this area of the market but figured that a compact 4x4 with the basic qualities of its popular Golf hatchback would hit the right notes with buyers. The Tiguan is that car.

Arriving at the tail end of 2007, the Volkswagen Tiguan was amongst the last models to join the compact 4x4 gold rush. It wasn't a particularly opportune moment with the market starting to look a little overstuffed with competitors but Volkswagen was confident in its classy approach to car design having the capacity to differentiate the Tiguan from the crowd. The vehicle looks like a jacked-up Golf and is based on the MkV Golf platform but its suspension is similar to that of the larger Passat saloon. The extended bumpers and wheelarches make it a substantially larger than the Golf in length and width, then there's the obvious extra height, courtesy of the raised suspension. The Tiguan hit the streets with a pair of turbocharged petrol engines and a TDI diesel. The entry-level 1.4-litre TSI petrol unit is Volkswagen's so called twincharger engine that combines supercharger and turbocharger technology to achieve its hefty power outputs. In the Tiguan, it was offered in 148bhp or 168bhp states of tune and buyers finding those insufficient could choose the 2.0-litre TSI turbocharged engine from the Golf GTI. Here, there was 197bhp to play with. The diesel was a 2.0-litre direct injection unit available in either 138bhp or 168bhp guises. Trim levels were based around Volkswagen's familiar S, SE and Sport hierarchy but there was also an Escape model which made more of the Tiguan's supposed off-road prowess with various modifications to prevent the car coming to harm out in the wilds. They look rather silly with their cutaway front bumper and underbody protection. The R Line models were launched in 2009 and took the opposite approach to the Escape ones. A sports styling pack gave the Tiguan a lower, more planted look and sports suspension enhanced on-road handling. The Match model replaced the SE in 2010.

What You Getword count: 179

The Tiguan is largely as you would expect a Volkswagen off-roader to look, the marque not known for its radical styling departures. The glasshouse is a good deal narrower than the lower section of the car which fills out at the shoulder line to chunky effect. There might even be a hint of Porsche Cayenne about the rear view. Inside, the design is lifted directly from the MkV Golf and Golf Plus models so you know it's going to have that Volkswagen air of quality. We know that the Tiguan is based on the MkV Golf but Volkswagen did a typically thorough job of converting their family hatch favourite into a 4x4. The Golf uses an all-aluminium sub frame but this was deemed not sufficiently strong to handle the buffeting that committed owners might subject their Tiguan too. As a result, the vehicle uses a modular sub-frame that's aluminium at the front and steel at the rear. The Tiguan was also the first vehicle to receive Volkswagen's electric steering system which was designed to eliminate kickback and enhance accuracy. 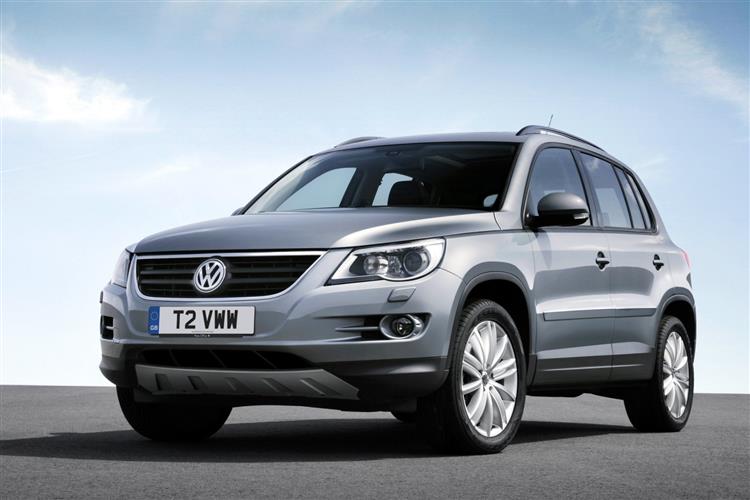