Things have changed since but back in 2008, while other mainstream car manufacturers were developing compact MPVs with seats that slid, folded, reclined, tumbled and generally contorted into a fantastical array of configurations, Peugeot watched from the side lines like a school boy who's left his PE kit on the kitchen table. Back then, car buyers striding into one of the French manufacturer's showrooms ready to be stupefied by the latest feat of MPV interior origami would have been pointed in the direction of the 308 SW. Not an MPV but a small estate with a couple of extra seats in the boot. The disappointment must have been tangible but once the customers had been dissuaded from walking out, closer inspection would reveal this extended 308 did have something to offer. And it still does. Today, Peugeot has plenty of MPV options but for many families, this 308SW would probably be a better fit. Let's check it out.

Peugeot's slowness to offer what most people would recognise as a compact MPV was a bit of a puzzle. The French marque had, after all, long offered large people carriers like the 806 and 807. They'd also dabbled with MPV design in the unorthodox 1007 citycar and the van-based Partner Combi. Yet it wasn't until 2010 that the Gallic brand finally came up with the 5008. Before that, it stayed out of the burgeoning compact MPV market where the likes of Vauxhall's Zafira and Renault's Scenic were having a fine time of it. Perhaps the policy was designed to leave the way clear for Peugeot's PSA partner brand Citroen to clean up with its Xsara and C4 Picasso models. Whatever the reason, it left Peugeot with only the 307 SW and then the 308 SW - estate cars with a couple of extra seats in the boot - to offer customers seeking a six or seven-seater of relatively compact size. When the issue was finally addressed by the 5008, it took some of the weight from the shoulders of the 308 SW, which had replaced its 307 predecessor in 2008. At the same time though, much of the point of this car's existence in the first place was removed. Compact estate cars with seven seats are a very rare breed for a reason. Still, this SW always felt a solid product and used examples can make very passable family cars. The 308 SW launched in 2008 when the 308 hatch had already been on sale for a year. Most of the hatchback's engine options were available, with the highlights being the 1.6-litre THP petrol in 150bhp or 175bhp guises and Peugeot's always impressive HDi diesels. Trim levels ranged from S through SE and Sport, with SR models added later.

Although a compact estate might have an element of the oxymoron about it, the 308SW is less compact than most. Peugeot insisted that the SW needed to be able to seat seven with two occasional seats which can be fitted into the rear but these are really only any good for small children. As a seven-seat MPV, the 308 SW trails the pack but as a five-seat estate with some extra kids' space, it's much more competitive. With the rear seats in place, there's 674 litres under the rear load cover, while with the rear seats removed, there's a massive 2,149 litres up to roof level. Let's put those figures into perspective. An Audi A4 Avant of the same era claimed to be the biggest estate in its sector, yet could swallow a mere 490 litres behind its back seats. There's a lot of room in a 308 SW. This isn't just a 308 hatch with a glasshouse tacked to its boot either. The wheelbase is 100mm longer than the hatchback car, which allows rear seat passengers to enjoy some extra space. The rear overhang was increased by 124mm to get that headline luggage bay size while the panoramic glass roof that gives the interior such a light and airy feel was increased in size by 27 per cent compared to the unit on the hatch. It extends beyond the heads of second row passengers for a truly full-length effect. Access to the rear is aided by separately opening tailgate glass for those moments when obstacles to the rear prevent you opening the full tailgate. Peugeot aimed for a classy ambience on the 308 and this is more in evidence the higher you climb up the trim level range. Equipment on all variants runs to power steering, remote control central locking with deadlocks, electric front windows, a steering column adjustable for reach and rake, a CD player, a trip computer and electrically operated door mirrors. 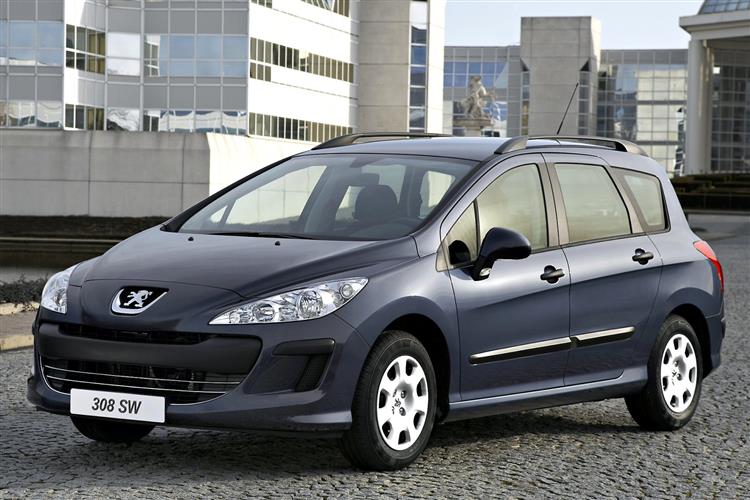