Trying to second-guess the behaviour of British car buyers can be an unrewarding endeavour. Citroen's first generation C3 was a supermini with little in the way of desirability other than some economical engines and a modest asking price, yet it proved a hit. The second generation model is a far more attractive proposition yet has proved a tougher sell for the French. This lack of buzz does mean that used bargains are around if you're prepared to do the spadework.

The Citroen C3 forged its reputation as a resolutely unsporty supermini with inoffensive styling, and which offered strong value for money. Never really a market leader in any area, it sold largely on the basis that it was about the cheapest supermini you could buy without an irredeemably bargain basement badge on its nose. Perhaps this quality of British buyer behaviour was overlooked when Citroen launched the second generation car in 2009. It was better in every conceivable regard, being a good deal more handsome, offering manifestly better fit and finish and improving the old car's safety and security quite markedly. As a consequence of its improved features and quality, pricing crept up, with entry level versions knocking on the door of £11,000. Then a strange thing happened that completely swept the carpet from beneath the C3. The scrappage scheme was introduced and this changed the way customers perceived cheap cars in general and Korean cheap cars in particular. The stigma attached to a Kia or a Hyundai was removed and this, coupled with the increasing sophistication of these marques, meant many defected. Why buy a Citroen C3 1.4 diesel when an equivalent Hyundai i20 was £2,000 cheaper? Citroen's sporty DS3 also served to divert attention from the C3. The forgotten car in the Citroen line up is, strangely, also one of its best.

Many of Citroen's most critically acclaimed efforts of recent times have been MPVs. The French manufacturer understands this area of the market and it's not a shock that elements of these successful people carrier designs have found their way into the C3 supermini. The domed roof line is carried over from the original C3 but efforts have been made to elongate the look of the car and the latest model is a far sleeker and sharper prospect. There's a large glass area for visibility and light in the cabin and the seating position is more upright than in many superminis, simplifying entries and exits. Unusually for a supermini, the C3 is barely any bigger than the car it replaced. At 3940mm long, it's not one of the larger models in this sector and keeping the exterior dimensions tight helped the designers to pull the neat trick of keeping the outgoing C3's weight. Inside, there's little sign that the car's had its growth stunted. It boasts one of the biggest boots of any supermini, at 300 litres, and there's room for four adults. Six-footers will struggle for headroom in the back but legroom behind the front seats is good for a supermini. It's clear that Citroen went out of its way to make the C3 cabin environment feel special. There's a vast range of different textures and finishes around the interior and some engaging design features. The centre console controls are neat and easy to operate, the steering wheel is well shaped and the design of the instruments demonstrates some flair. There are quite a few small storage areas dotted around and although the door-pockets are a little truncated, the glovebox is surprisingly large. 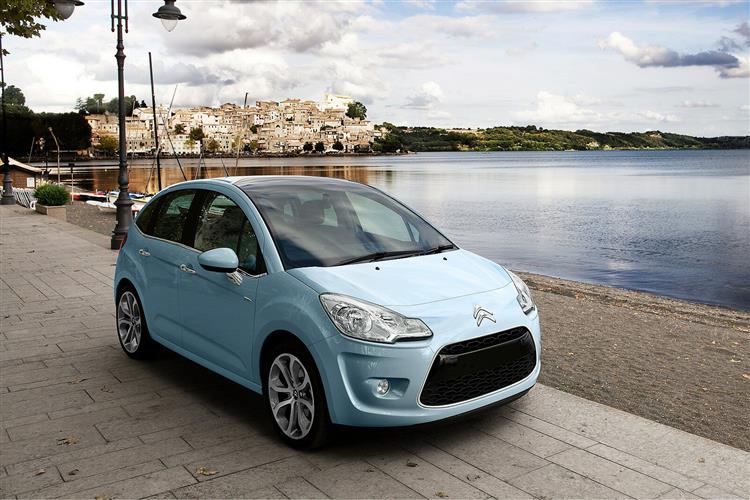