ZED'S NOT DEAD (some text hidden)

Talk about big boots to fill. The Nissan 370Z is a car that was burdened with serious weight of expectation. Given the massive success of its 350Z predecessor, buyers were left wanting more. More performance, more attitude and even more fun. Nissan got things mostly right with the 370Z and sales have been strong, if not matching the frenetic take up of the 350Z. Here's how to track down an honest used example.

Even Nissan admits that the popularity of the 350Z exceeded even its most optimistic projections. In 2004, the Zed outsold the Audi TT in the US by a ratio of ten to one and after only three years production it had shifted over 150,000 units. With an all-new Audi TT and Porsche Cayman arriving in 2006, Nissan no longer had quite such an easy ride and with BMW also fettling the Z4, Nissan's designers knew they had to move things on a level. The 370Z debuted in the wake of the astonishing GT-R supercoupe and expectations were high. Powered by a 3.7-litre V6 that developed 325bhp, the 370Z looked like a tautened, distilled version of the 350Z. It featured a shorter wheelbase, greater use of lightweight body materials and a new 7-speed automatic transmission with paddle shifters, as well as the world's first synchronised down/up shift rev control system for the manual transmission. The Roadster model was introduced at the start of 2011, in the same trim grades as the coupe. A limited edition 370Z Black coupe was introduced in 2010, commemorating 40 years since the 240Z was launched. This featured special paintwork, a red leather and suede interior, 19-inch RAYS alloy wheels and a premium infotainment system.

The 350Z had deceptively simple lines and a handsome aggression that marked the Nissan out from its more obviously "styled" contemporaries. The 370Z isn't a massive departure from this approach and if anything, it's an even more imposing prospect. The rounded lines of the front and rear ends remain but the roofline now pivots at the top of the windscreen before sloping away steeply to the rear in a fashion reminiscent of the all-conquering GT-R. The front air-intake also borrows from Nissan's supercar slayer and gives the 370Z greater malevolence as it looms in your mirrors with twin aerodynamic fins rising like fangs from its lower lip. Nissan is keen to stress the Z car lineage in the styling that can be followed all the way back to the 240Z of 1970 but the 370 still looks a very modern coupe. The interior of the 350Z was something of a let down, well put together and functional but lacking the design flair that some expected from a £30,000 coupe. The 370Z addresses this with improved materials and some extra creativity. A number of the old car's trademark features are still intact, such as the instrument cluster attached to the steering column that moves as you adjust the driving position to guarantee an unhindered view of the dials. The two-seater layout is also retained but there's a shelf behind the front seats that provides additional storage. The 350Z had a strut brace across its parcel shelf that tended to get in the way when storing bulky items but that's now gone, made redundant by stiffening work elsewhere, and Nissan has also added a lockable glovebox for increased security. The entry level 370Z comes equipped with an Intelligent Key, plus an engine stop/start button, power adjustable seats, climate controlled air-conditioning, 18-inch alloy wheels, automatic xenon headlamps, curtain airbag, alarm, audio with auxiliary input and Bluetooth hands free phone connection. The GT Pack version meanwhile, gets 19-inch forged RAYS alloy wheels, heated seats trimmed in black suede and leather, a six-CD Bose audio system with eight speakers, cruise control, speed limiter and Synchro Rev Control. Topping the range is the GT Ultimate which includes Persimmon suede leather along with a DVD satellite navigation system. Go for the Roadster and you get a soft-top that can be raised or lowered in 20 seconds at the press of a button. Compared to the 350Z roadster, it has an enlarged heated rear window for improved visibility and a cleaner silhouette with the hood raised. 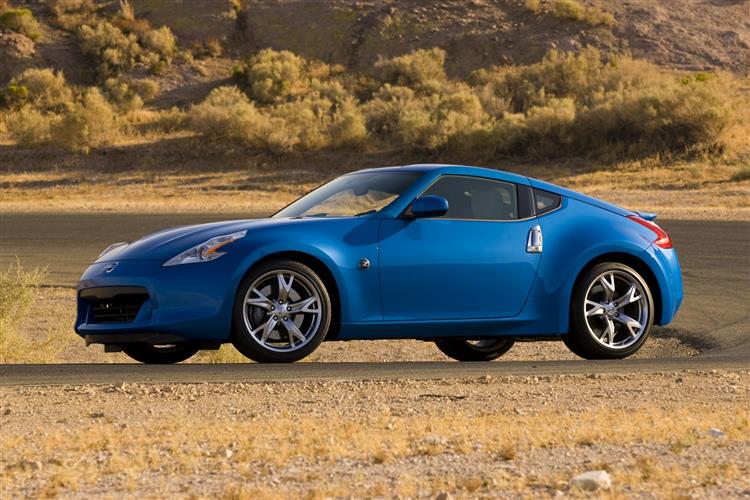