If you're buying a used family hatch, it's hard to do much better than looking at a Volkswagen Golf Mk6. You won't find any outrageous bargains but you will find a wide choice of very sturdy, extremely reliable vehicles to choose from. The Mk6 was the Golf where everything came together for Volkswagen and sales have been justifiably huge. Here's what to look out for when trying to narrow down your selection.

Even car manufacturers as big as Volkswagen rarely get things right first time. Developing a successful car is, in certain respects, a little like spinning plates. Focus your development resource on one aspect of the car and attributes you once took for granted as industry-leading tend to revert to the mean. The Golf's history is a case in point. The Mk1 established the brand, the Mk2 grew a little bigger and with the Mk3, the consensus was that it had grown too fat and wasn't enough fun to drive. The Mk4 was a tauter, better looking thing but still was no great shakes to drive. Cue the Mk5 which featured fully independent rear suspension and was a hoot to punt along a country lane. Unfortunately in focusing on its driving dynamics, Volkswagen temporarily took their eye off the ball when it came to materials quality and many of its key rivals offered interiors that were the equal or better. Some were entirely unexpected. Sit in a Mk5 Golf and an equivalent year Fiat Stilo and have a poke around at the materials used. Think of the Mk6 Golf as the sweet spot. It retained the Mk5's spirit but upped the quality and improved efficiency. Gone were the thirsty V6 range toppers, replaced by a more responsible turbocharged 2.0-litre four cylinder engine in flagship Golf R guise. Whereas each of the previous five generations looked quite markedly different, this sixth generation car looks much like a Mk5, from the outside at least. Get closer and everything is that little bit more polished. The 1.2-litre TSI engine debuted in 2010 but the biggest development of the range came in 2011, when an all-new Cabriolet model was announced to be sold alongside the existing Eos model.

Volkswagen was never about to break with tradition where the Golf's styling was concerned. A clear design lineage can be traced back to the original Golf circa 1974 and breaking that in favour of some bold new styling direction would have been completely out of character for the German marque. Conservative but classy has long been the Golf mantra and the Mk6 model diligently tows that line with the wide grille first seen on the Scirocco coupe which merges with the headlamps to form a single band across the nose. At the back, the huge tail light clusters are similar in shape to the headlamps and curve round into the rear wings to visually widen the car. It's the interior, though, where the most obvious alterations have been made. Quality soft-touch plastics are everywhere and virtually every available button or dial gets its own chrome border. The instruments that used to illuminate in blue are now bright white but the overall shape of the dash is similar to that in the Mk5 Golf. There's a big step forward in terms of refinement, however, thanks to a completely new design of door and window seals, a new damping film that supports the windscreen and a new engine mounting system. This Golf is available in six trim levels - S, Match, GT, GTD, GTI and R - but there are also fuel efficient BlueMotion models to consider based on the 1.6 TDI engine and versions with BlueMotion Technology (some but not all of the BlueMotion features). There are three or five-door body styles with the standard hatch, plus a more versatile Golf Plus variant and an estate model. All Golfs boast a high level of standard specification. The S has, among a number of features, ABS and ESP (Electronic Stabilisation Programme), seven airbags including a driver's knee airbag, remote central locking, Climatic air conditioning, a CD/radio, plus body-coloured bumpers, door handles and electrically heated and adjustable door mirrors. What To Look For (used_look) 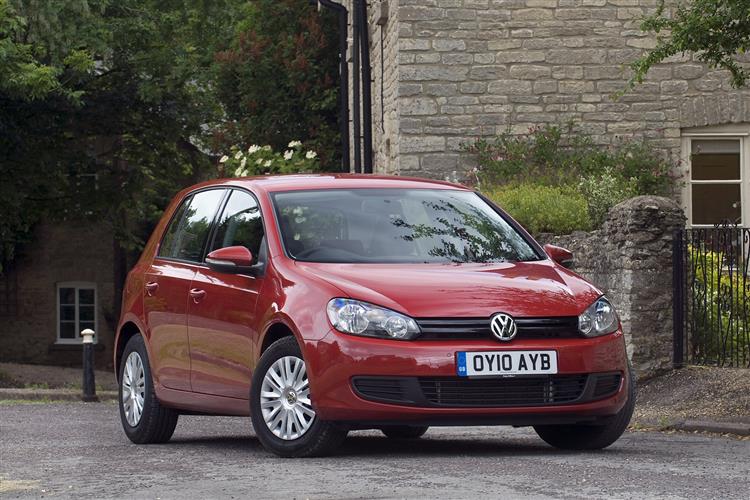