CHROME ON THE RANGE (some text hidden)

Buying a used pick-up would seem to be a fairly straightforward assignment, and buying a used Ford pick-up easier still. While it's true that Ford's Ranger is one of the toughest cars in its class, it's worth remembering that some were bought as lifestyle accessories and some have been given a good battering on a building site or plantation. In other words there's a whole heap of variability in the quality of used stock. Here's what to look for when shopping used.

Pick-ups have come a long way in the last few years. Until the turn of the century, they were basic, utilitarian things but by 2005, the standard had risen so dramatically that many buyers could consider double cab versions of offerings like Nissan's Navara, Mitsubishi's L200 and Toyota's Hilux as realistic alternatives to a family estate. They weren't quite as refined to drive but for those with hard day jobs also wanting the same vehicle for weekend use, they were just the ticket. Ford's Ranger was improved at the same time too but it took until the launch of the 2009-generation version we're looking at here for the Blue Oval to really get on terms with its competitors. This model sold well, despite tax regulations that, in effect, closed a loophole that made these vehicles popular for private buyers for a while. The last of the Mazda-developed cars, this version of the Ranger was replaced in 2012 by a more expensive and more sophisticated in-house Ford design.

This version of the Ranger is more distinctive than its predecessor, thanks to the same kinetic design that has served Ford's passenger cars so well. As before, customers had a choice of the 'Regular Cab' two-seater (with a Tipper option) and the 'Super Cab' model with its occasional rear seats. There's also a Double Cab version intended to appeal to the leisure-orientated private buyer market for the kind of customer who enjoys active outside pursuits and wants something a bit tougher and more versatile than an ordinary SUV. Inside, it's pretty family-orientated, with plenty of cubbies, boxes and bins for ample cabin storage. At the wheel, there's that great driving position, compromised only by the lack of reach-adjustment on the steering wheel and the rather utilitarian 'umbrella handle'-style hand brake. The silver detailing isn't bad, the three-ringed instrument cluster is easy to read and on the top Wildtrak model, there are extra dash-mounted gauges that display pitch and roll, internal and external temperature and a compass. Space for rear passengers is slightly less comfortable than that provided for those at the front, thanks to rather upright seating, though legroom is better than you might expect. It's a pity there's no three-point belt for the middle rear passenger though. There are three load deck sizes, depending on which of the three bodystyles you choose. This doublecab has a class-leading loadbox length of 1530mm, a width of 1456mm and a depth of 465mm and there are useful loadbox tie-down to keep items from sliding around in transit. A nice touch is the two-position drop-down tailgate. 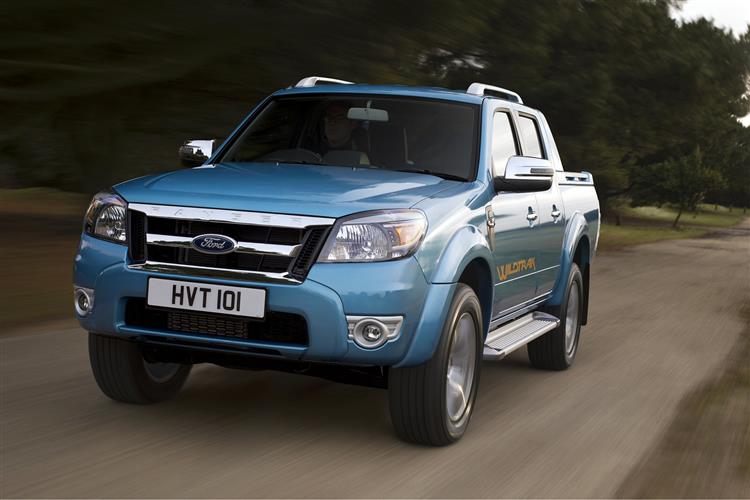