* Introduction The Q7 represents Audi's first stab at a serious luxury 4x4 and although it has failed to ignite the market in quite the way the company hoped, as a starting point for the brand, it's done reasonable business and paved the way for other sports utility vehicles bearing the four rings. Make no mistake, the Q7 is a serious piece of automotive real estate and one that often feels too big for the city streets and, indeed, tight country lanes. It's also a vehicle that should really only be bought if you need its full seven-seat capacity as it can be rather compromised as a five-seater. Used examples are surprisingly common.

The Q7 represented a very overdue entry by Audi into the lucrative luxury 4x4 market. BMW's X5 and Mercedes-Benz's M-Class had been cleaning up for some years, making some very respectable numbers especially in the US. Latterly, Porsche and Volkswagen got in on the act but Audi had been noticeable by their absence. While it was true that the midsize Allroad was a fine vehicle and up to many of the dynamic demands typical owners of bigger 4x4s would place upon it, it was clearly not enough, either in times of size or image. Cue the Q7. Lumbering into view in spy shots in late 2004, the Q7 certainly addressed the size and image questions. It landed on showroom floors in the UK in March 2006 and sales have been steady but not spectacular. At first there were just two engines, a 3.0-litre TDI diesel that did sterling service elsewhere in the Audi range but which was rather swamped by the Q7's bulk, and a punchy but thirsty 4.2-litre FSI petrol unit. A 3.6-litre FSI petrol engine arrived at the start of 2007, followed by a 4.2-litre TDI diesel, both better and/or more relevant units than the initial pair of powerplants. A facelift in the Spring of 2009 saw alterations to the front end and LED tail light clusters introduced but more intriguing were the modifications made beneath the skin to save fuel. A kinetic energy recovery system was rolled out across the Q7 range and a Clean Diesel version of the 3.0 TDI engine used an AdBlue injection system to reduce harmful exhaust emissions. In 2010, the engine range was trimmed back with petrol options limited to two versions of the 3.0-litre supercharged unit and diesel customers invited to choose either the latest 3.0 V6 TDI (standard or Clean Diesel) or the 4.2-litre V8 TDI. An eight-speed automatic gearbox was fitted to all models from this stage.

What You Getword count: 350

If Audi had size as a key Q7 design criterion, they certainly succeeded in its fulfilment. It runs on a stretched version of the Volkswagen Touareg chassis and features a seven seat configuration, making it ideal for bigger families. If you can get away from the rugged mud plugging mentality and instead think of it as a multi-purpose estate car on growth hormone, you'll bond with the Q7 a whole lot quicker. Even its styling seems to distance it from off-roaders. The coupe-like dipping roofline isn't standard 4x4 fare, nor are the resolutely horizontal shoulders. Audi even offer contrasting body colours in a bid to emphasise the car's shapely profile. One can't really underestimate the importance of this vehicle to Audi, a company that looks set to belatedly diversify into some previously profitable market niches. The Q7 also spawned the Q5, a smaller and less expensive model that aimed to bring the theme and the MPV-style interior trickery to a wider audience. Audi claim 28 seating and loading configurations are available in the Q7 and the seats in the second row are adjustable for fore/aft movement. This allows Audi to not only lay claim to the most generous second row legroom in the class but also - with the second row slid forward and the rear folded - to also pinch first prize for luggage capacity, a huge 775 litres. With a length of 5,086mm and a wheelbase of 3,002mm, the Q7 isn't the most nimble rock hopper, but it does feature variable ground clearance (from 180 to 240mm), hill descent assist and an off-road mode whereby the ESP stability control system backs off to allow for loose surfaces. There's also a trailer stabilisation system which reduces the risk of fishtailing via targeted brake intervention. Let's not kid ourselves here though. The Q7's off-road aspirations aren't anything much greater than muddy tracks and wet grass. This is a car which has a sensibly tarmac-biased set-up, from its 60:40 torque split to its 18-inch alloy wheels. If you really want to bring the bling, 19 or 20-inch rims are also offered. 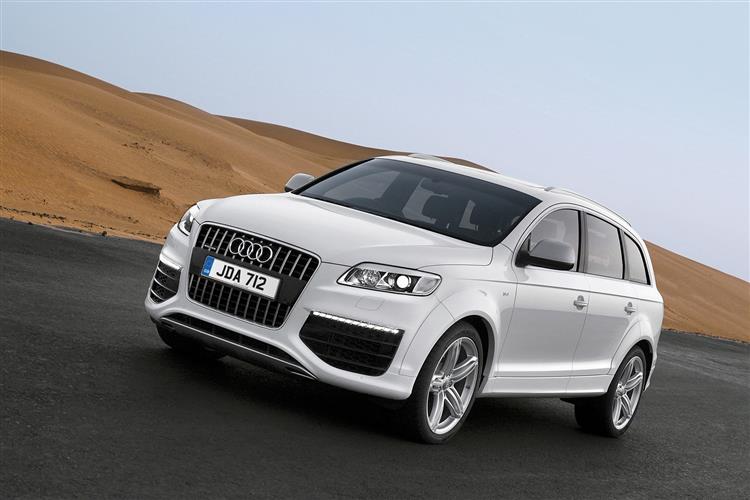