When Ford elected to bring the knowhow that had installed the Fiesta, Focus and Mondeo at the top of their respective classes to the compact 4x4 market, the Kuga was born. Not your typical family-friendly soft-roader, it mixed practicality with sharp handling and athletic styling. As a 4x4 for people who didn't really like 4x4s, it quickly struck a chord with new car buyers and the attraction should theoretically be much the same as we examine the market for used models.

The days when 4x4 vehicles were exclusively for country dwellers with a mile of rutted track between the nearest surfaced road and their front door or a thousand head of cattle to tend were long gone by 2008 when 4x4s were everywhere. Most of the mainstream manufacturers had at least one and Ford swelled their ranks by launching its Kuga. Like the majority of its compact 4x4 contemporaries, the Kuga is no all-terrain vehicle. In fact, in 2008 it was one of the most road-orientated 4x4s we'd yet seen. This was a sensible approach when you consider that the road is where 4x4s in the UK are predominantly used and the Kuga ended up paving the way for the glut of 'crossover' 4x4s that would follow. The summer of 2008 marked the Kuga's debut in showrooms. It launched with just one engine, the 2.0-litre TDCi diesel, and a couple of trim levels, Zetec or Titanium. The car featured Ford's "Intelligent AWD system" which distributed power between the front and rear wheels as it saw fit. Six months later, the line-up extended. A lower priced front-wheel-drive version of the 2.0 TDCi model entered the fray and Ford fitted a version of the 2.5-litre turbocharged petrol engine that was used in hot versions of the Focus hatchback. Producing 197bhp, this turned the Kuga into something of a hot rod by compact 4x4 standards and was optionally available with a 5-speed automatic gearbox. The second important series of changes manifested themselves in summer 2010. The diesel range was enhanced with the original 134bhp 2.0-litre TDCi diesel replaced with a 138bhp unit of the same capacity and a 161bhp version slotting in above that. Only the less powerful engine could be ordered with front-wheel-drive but all were available with Ford's PowerShift twin-clutch gearbox at a premium of £1,500.

Ford managed to hit just the right note between sporting aggression and nuggety cuteness with the styling of the Kuga. It has a sleeker shape than the majority of compact 4x4s with some particularly nice detailing around the body. It successfully tones down the macho off-roader image that some of its rivals tried to convey. In 2008, it looked every inch the modern compact 4x4 and the styling hasn't dated too much. The interior isn't quite as successful as the exterior. For a start it's surprisingly small, the Kuga being one of those increasingly rare cars that doesn't pull all manner of packaging tricks out of its hat. Space in the back is tight for anything other than kids and drivers who are long in the body will find headroom an issue when getting in and out. The second row of seating has a 60/40 split and can fold completely flat to maximise the load space. Underseat storage beneath the second row with further storage under the floor of the luggage compartment area offers maximum practicality. The Kuga has a generous luggage capacity of 1,355 litres when in two-seat mode, while the enclosed luggage compartment achieves a volume of up to 410 litres. 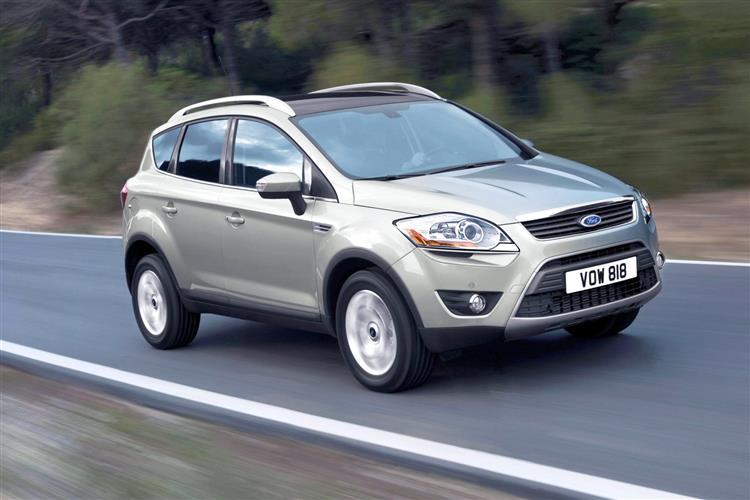