The Citroen C4 built a strong reputation, both as an all-conquering rally car and a slinky-looking coupe. But most people will remember the dancing Transformers robot and the 'Alive With Technology' tag. With an all-new and more conservative C4 being unveiled at the end of 2010, we take a look at the last of the previous line and assess how it fares as a used proposition.

By the time the Citroen C4 had reached middle age, the dancing robot had morphed into an ice skating one and the changes made to the car had improved it in a number of ways - some concerned with improving efficiency. When the original C4 was introduced in October 2004, Citroen thought that high-tech would sell the car but, in the event, it distanced as many potential buyers as it attracted. By 2008, the technology had matured very well, many of the C4's niggling reliability issues had been ironed out and the market, too, had changed. Buyers wanted a car that was inexpensive to run but reliable as well. In short, the C4 had to shape up or ship out. The 2008 model year changes included subtle styling updates, a revised petrol engine line up, and the adoption of low-rolling resistance tyres from Michelin. The existing 1.6i 16V and a 2.0i 16V engines were scrapped in favour of 1.6 litre units (co-developed with the BMW group) called the VTi 120 bhp (Variable valve lift and Timing Injection) and THP 150 bhp (Turbo High Pressure). The interiors of the cars were tidied up a little and used better materials, there was a new navigation system with a 7-inch screen and a 10GB hard drive. The number of trim levels across the range was also rationalised.

By the time the 2008 restyle rolled round, Citroen had managed to shift over 900,000 C4s, so the Alive With Technology theme was certainly chiming with some. The refettle involved restyling the front end to look more like the C5 and launching the 1.6-litre VTi (Variable Valve Lift & Timing) petrol engines. The mainstream C4 range is split between Coupe and Hatchback models. 'Coupe' is Citroen-speak for 3-door, the family-orientated 5-door derivatives being called simply 'Hatchback'. The engine range opens with Citroen's older 90 and 110bhp 1.4 and 1.6-litre 16-valve petrol units. Best, however, to try and stretch either for a diesel or for one of the more modern petrol engines. Many will choose the 120bhp 1.6-litre VTi option, attracted by its 120mph performance and 42mpg combined fuel economy. Interiors are spacious with the Coupe providing similar amounts of rear legroom and boot space to the Hatchback. The boot opening is narrower, though, and the levers that fold the front seats forward allowing access to the rear have a habit of sticking up to catch the shins of passengers climbing in. All Citroen C4 models get ABS with EBD and brake assist, twin front and lateral airbags plus side window airbags. There's a multi-function trip computer, a CD stereo, remote central locking, electric front windows, electric door mirrors, power steering and cruise control with a speed limiter. This is a well equipped car and it becomes even more so as you ascend the trim level range. Citroen's Europe-wide navigation system, MyWay, was introduced, which features a high-resolution 7-inch colour screen, Bluetooth and USB connectivity as well as an audio system with a built-in 10GB hard drive. 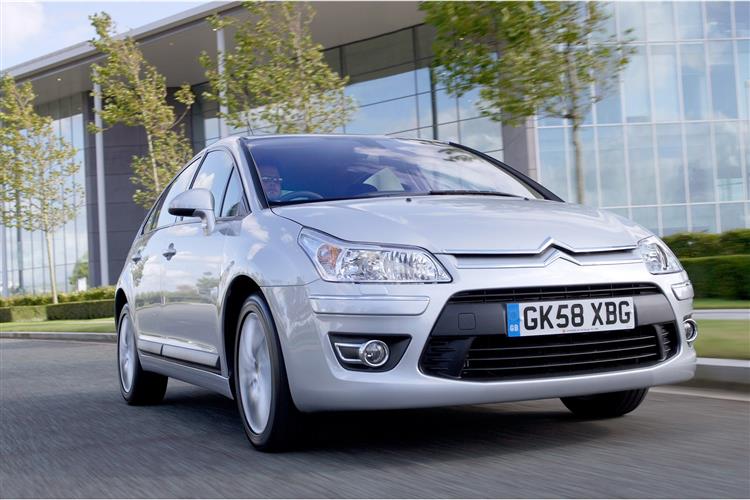