Audi has built quite a bloodline of crushingly fast estate cars but the RS6 sits right at the very pinnacle. BMW and Mercedes offered some seriously rapid executive cars in the shape of their M5 and E63 AMG, but Audi pulled the rug from beneath them when it unleashed the second generation RS6, powered by a version of the V10 engine found in a Lamborghini Gallardo. By any measure it's an exceptional vehicle and second time round was offered in both saloon and estate guises.

The first RS6, sold between 2002 and 2004, used a twin-turbocharged 4.2-litre V8 to bludgeon the opposition into submission. It was never the most surgical of cars, instead relying on a thud and blunder approach and it wasn't a vehicle without its foibles either, most notably the flaky DRC suspension system that most owners will have swapped out by now for a more conventional Bilstein setup. This model transformed from 450bhp RS6 to 480bhp RS6 Plus before eventually being phased out in 2004. Few thought that they would need to wait nearly four years for its replacement but the car that was unveiled at the 2007 Frankfurt Show was something that had Audi fans falling over themselves looking for a dotted line to sign. Powered by a 5.0-litre V10 engine helped by two turbochargers to a comfortably overstuffed power output of 579bhp, the RS6 landed in UK dealers in January 2008. Unfortunately this coincided with the credit crunch and sales were modest, hampered by an asking price the wrong side of £75,000. An RS6 Plus model was launched in 2010, but unlike its predecessor, it offered no more power, instead being limited to 500 examples worldwide, featuring carbon-fibre goodies under the bonnet, leather on the instrument cluster hood and embroidered badges on the carpeting.

What You Getword count: 304

The RS6 hints at its fearsome capabilities via a reworked exterior. The rear view that rivals may be forced to get used to is dominated by two huge oval exhausts set into each end of a diffuser that's cut into the bumper. At the front, the cooling ducts of the A6 base vehicle are super-sized and the wheelarches flare dramatically around the standard 19" wheels. Chromed mirrors and side skirts complete the effect. It's a rather low key look when you consider the monumental firepower under the bonnet but Audi's RS models have always done a good line in understated aggression. It's menacing rather than in your face. There's more to the RS6 than its engine. The S6 chassis has been extensively re-worked with the introduction of revised all-hydraulic version of the Dynamic Ride Control (DRC) system found previously in the old RS6 and the RS4. DRC allows the driver do adjust the RS6's damping through a three-stage system with comfort, dynamic and sport settings. It progressively stiffens the suspension for a more focused driving experience when required or eases off to enhance ride comfort. The ESP system on the RS6 has been programmed to make late interventions, allowing the driver scope to enjoy the car's handling characteristics to the maximum. The system will brake individual wheels and modulate the engine's power output to rescue the situation if it detects that the driver has lost control but it's been specially designed to give the enthusiastic RS6 owner room for manoeuvre. Those who find even this set-up intrusive can turn the whole thing off entirely but on your head be it. Braking is by a high-spec set of ceramic discs designed to resist fade and stand up to the taxing job of bringing this substantial vehicle safely back from the extreme velocities it's capable of. 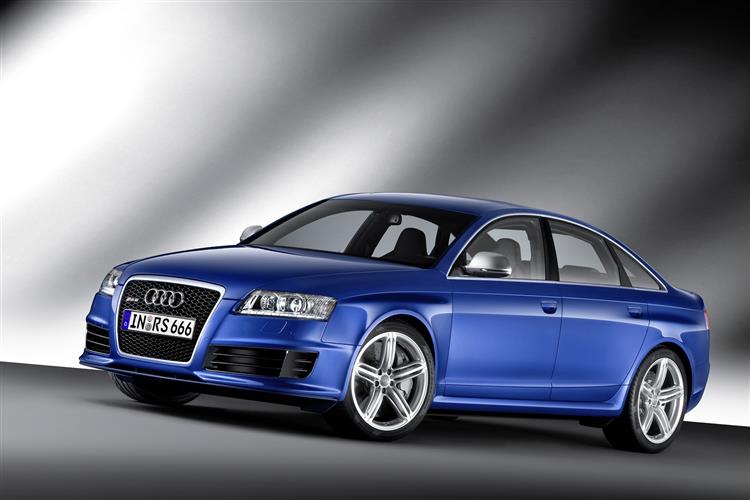