I'm struggling to think of a car with a more convoluted model history than the S80. This second generation model as launched in 2006 and since then has had no fewer than eighteen different engine available, a whole variety of trim changes, equipment variations and tweaks to the styling and options packs. In other words, it's virtually a statistical impossibility to find two ostensibly identical S80s. The second generation car was launched in February 2006 at the Geneva Auto Salon to a largely underwhelmed media who were expecting something all-new and instead got a car that looked very much like its predecessor, albeit in a smoother and better finished manner. Three petrol engines were available, a 198bhp 2.5T, a 236bhp 3.2 and an all-wheel drive 312bhp 4.4-litres were available as well as a pair of diesels; the 162bhp 2.4D and the 184bhp D5. February 2007 saw a trim realignment with the S model deleted and the SE trim upgraded and in May 2007 the 2.4 D5 was made available with all-wheel drive. 2008 didn't pass by without Volvo fiddling with the S80 range with April seeing the S80 Executive trim getting better quality interior materials and some very agreeable massaging and ventilated front seats. The following month the S80 Lux was tweaked with upgraded chronograph-style dials and heated washer nozzles. The S80 enjoyed a facelift in 2009 with some additional chrome on the exterior, revised instruments, a more imposing corporate grille, an upgraded steering wheel, and brightwork on the centre console's floating stack. A number of revisions were made to the engine line up with the upgraded 175bhp 2.4 diesel made Euro4 compliant, the twin-turbo 205bhp 2.4D was introduced and an entry level low emission 1.6 DRIVe diesel model was quietly unveiled. A lowered dynamic chassis and a comfort chassis option was also offered and the 2.5T engine was upgraded from 200 to 229bhp. Fast forward to 2010 and the S80 got the economical 160bhp D3 2.0-litre diesel engine and the 179bhp T4 2.0-litre petrol powerplant.

First impressions are deceiving with this car. It's only when you get the Mk1 S80 next to the current generation model that you'll see quite how far it has evolved. OK, so many of the primary design cues are still much the same - the distinctive shoulders that run all the way back to the tail lights, the arched roofline and the rather bluff front grille up front. Look beyond them though and you can see some significant changes to the vehicle's stance and its fine detailing. The old S80 was a bit of a frumpy thing. This one has smartened up nicely and the most recent models feature a more distinctive front featuring a larger badge, plus extra chrome detailing on the air intakes, the lower part of the doors and under the tail lamps. Inside, well, it's all rather refreshing. Instead of trying to copy their German rivals, Volvo have gone their own way. The Swedes claim that their 'design language' radiates a simpler, more stylish and modern feel by combining aesthetics and technology in a more inviting and intelligent way. I'm not sure that I buy into that completely but there's certainly a nice blend of no-nonsense Scandinavian style thanks to nice touches like the slim 'floating' centre stack (with its smarter 'Silk Metal' frame) in the centre of the dashboard, quality materials for upholsteries and a thoughtful choice of inlays and colour schemes that blend smoothly together. As before, there's comfortable room for five adults and a huge 422-litre boot. 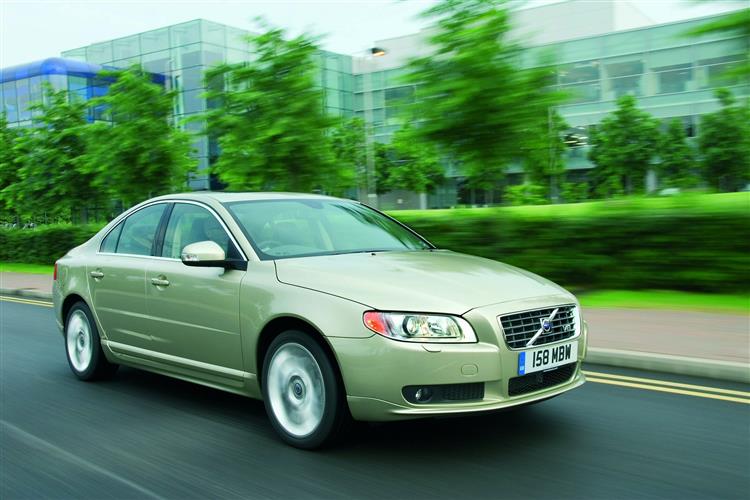