Where to start with the history of the Mitsubishi Shogun? If you've got all day we could start back in 1981 at the Tokyo Motor Show and walk through from there, but I suspect that you may have more productive uses for your time, so I'll press the fast forward button through the second generation (1992-1999) and third generation models (1999-2007). The third generation car was the one that really had to weather the British public's defection from the family 4x4 market and lessons from this model have been incorporated into the bigger but more energy efficient fourth generation version we look at here. Two and a half million cars after the Shogun's debut, the fourth generation was introduced at the Paris Motor Show at the end of September 2006 but didn't land in British dealerships until March 2007. Both three door standard and the more popular five-door long wheelbase models were introduced, both powered by the same 3.2-litre turbodiesel engine. Safety was improved and the Shogun's engine was able to comply with the all-important Euro IV emissions regulations. With over 70% new componentry compared to its predecessor it has sold steadily and it won't be too long before those manufacturers who abandoned this market sector will be eyeing it once more. In late 2009, the engine was heavily revised in order to provide more power with brake horsepower going up from 168 to 197bhp.

Although the shape is instantly recognisable as that of a Shogun, there are a number of key differences between this fourth generation car and its direct predecessor. Keen spotters will clock the contoured front lights blended with the blistered leading edge of the front wheelarch. There's also a revised front grille with bolder chromed slats. The short overhangs and the upright windscreen serve to remind buyers that this is no bling smoothie, instead wearing its macho credentials on its sleeve. Three door short or five-door long wheelbase models are offered. They're properly big too. In long wheel base guise, the car is 4.9m long, 1.9m wide and 1.9m high so you'll need a garage with a fair amount of headroom. Mitsubishi's innovative 'Hide&Seat' system quickly converts the long wheelbase car from a five to a seven-seater with two seats that fold from a flat boot floor to create a third row complete with integrated head rests. These rearmost seats are impressively roomy and when they're folded away, there's a 1,790 litre luggage compartment for your convenience. You won't be blown away by classy materials and swish design inside the Shogun but it never feels less than extremely durable and very user-friendly. 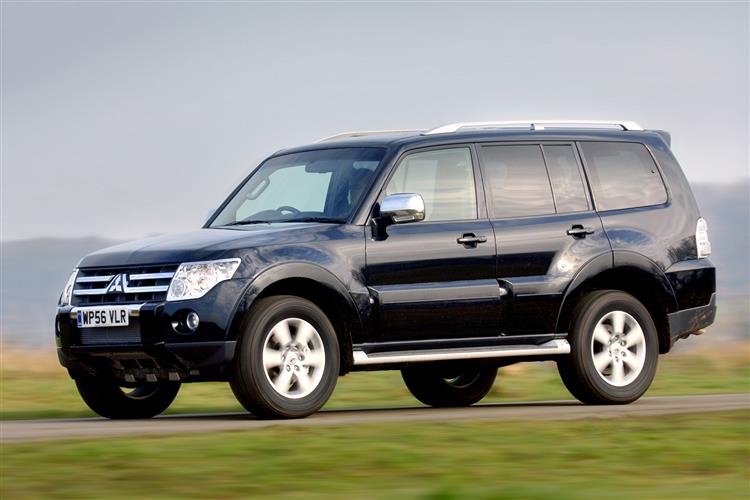