By 2008 there weren't too many more common sights on our roads than a Ford Focus. The Blue Oval had sold 1.1 million of its first and second generation models to eager British punters and had bagged more than 80 international awards for the car, including the Car of the Year titles in Europe and North America. That's good going but Ford wanted more from its sharp-handling family hatchback. A series of tweaks was made to keep it fresh and it's the resulting facelifted Focuses we're evaluating here. Is the big-selling, award-winning machine a used car you'd want to own?

When you're on top, everyone tries to shoot you down, be it by looking for chinks in your armour or copying the qualities that got you into that pre-eminent position. That's why getting on top is one thing but staying there is a tougher task altogether. Despite the difficulties involved, Ford's Focus enjoyed an extended reign over the family hatchback segment of the car market that began with the launch of the original model in 1998 and continued when the second generation on arrived in 2005. By that time, the rivals were snapping at its heels so Ford introduced a facelifted model in the interests of keeping them at bay. What changed? Most notably, Ford introduced the Kenetic design themes that had gone down a storm right across their model range from Mondeo to Focus. The key element of this was the twin trapezoidal grilles that dominated the front end but swept-back headlamps and flared wheelarches also formed an integral part of the look. Ford must have liked it because by 2010, every passenger car model it sold in the UK would exhibit these features in one form or another. There were also changes inside where the Focus had started to feel tangibly less plush than some of its rivals. Soft-touch plastics were introduced, along with higher grade fabrics and redesigned controls. Three and five-door hatchbacks were available, along with a saloon and an estate but the Focus family also extended to the Coupe-Cabriolet convertible model and the C-MAX compact MPV. The engine line up remained unchanged and expansive: 1.4, 1.6, 1.8 and 2.0-litre normally-aspirated petrol engines were offered, along with the 2.5-litre turbo petrol from the ST and TDCi diesel units of 1.6, 1.8 and 2.0-litre capacities. The 1.6 TDCi engine powered the super-efficient EConetic models, which gained stop/start technology and sub-100g/km CO2 emissions at the end of 2009. Just before this, Ford also introduced the impressive Powershift dual clutch automatic gearbox. The sporty Zetec S trim level was added to the range late in 2008 and the significantly sportier second generation Focus RS turned up early in 2009 with no fewer than 300 braked horses. The RS500 model was launched in 2010, offering a limited run 345bhp version of the RS for a whopping £35,000.

Benefiting from Ford's 'kinetic design' approach to styling, this faclifted MK2 Focus took its inspiration from its larger Mondeo stablemate. Trapezoidal grilles, swept back headlamps, bolder wheel arches, re-shaped rear glass, a contoured tailgate and smarter tail lamps are the key changes. Higher trim grades benefit from chrome detailing and a stylish, body-coloured upper rear spoiler. Inside, the more upmarket aura continues. Nicer soft-touch plastics cover the dash top as well as the upper front door trim and this is complemented by plusher seat fabrics, plus a variety of more attractive fascia finishes. The instrumentation was re-designed too and, along with other interior controls, is illuminated in red. Controls for the upgraded audio equipment and two-zone air conditioning were ergonomically improved. The advanced compact control-blade rear suspension on the Focus helps the five-door hatch model achieve a sizable 385-litre carrying capacity, as the load bay is completely flat and unencumbered by suspension intrusion. In the Estate version, there's 475 litres of load space with the 60/40 rear bench in place, but drop the seats and there's a cavernous 1525 litres, making the Focus boot a good deal bigger than those of many executive class estate cars. With the seats in place, the load bay is just over 104cm long, 116cm wide and up to 89cm high. With the rear seats folded you have a 167cm long distance from seat back to tailgate. Equipment runs to most of what you would expect on a car of this type (twin front airbags, air conditioning, ABS etc) but there are some nice extra touches. In addition to a movable armrest and a four-litre-capacity storage compartment, there are storage areas for back-seat passengers. Plus items such as a 230 volt socket or the USB audio connection box were available with some trim levels. 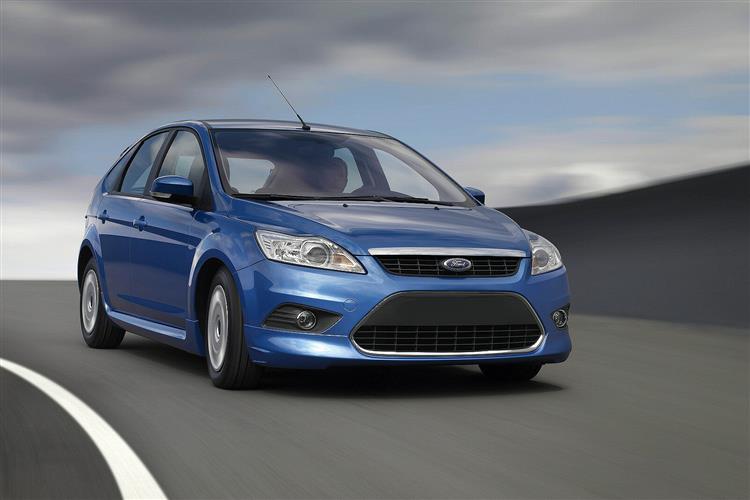