Thanks to models like BMW's MINI and Citroen's DS3, small car owners who can afford to spend a little more are better served than ever before. They drive something supermini-sized, not because they have to but because they want to, and are basing their decision on looks, styling and performance as much as on economy and urban practicality. Alfa Romeo's MiTo (the name derives from Milano and Torino) is Alfa's chic alternative with a prestige badge and space inside that shames a MINI. It also helps that its styling is quintessentially Italian and that concerns over build and reliability, which have notoriously plagued the marque in the eyes of older UK drivers, have been largely laid to rest in recent years. This car based on proven underpinnings shared by the Vauxhall Corsa and Fiat Punto but offers a much more passionate package. Here's how to find a used example.

While Alfa Romeo's stablemate brand Fiat has long had a history of producing diminutive cars ideal for congested cities, the Alfa Romeo badge has traditionally been seen on the bonnet of sportier, more shapely models. Launched at the beginning of 2009, the MiTo proved Alfa had not given up on its sporty pedigree and love of style, but that it had recognised the need to produce a smaller car that appealed as much to the budget as to the heart. However, rather than start from scratch, Alfa turned to Vauxhall and good friends Fiat and took the Corsa and Punto supermini underpinnings as their starting point. This provides a sound foundation in terms of build quality, proven durability and engineering know-how. The three-door hatch MiTo was launched in the UK early in 2009 with Turismo, Veloce and Lusso trim levels. Initially, the range was based around older petrol engines borrowed from the Punto, a 95bhp 1.4 16v and the turbocharged 1.4 TB (120bhp and 150bhp). There were also 1.3 and 1.6 JTDm diesels. A 78bhp 1.4-litre petrol unit was quickly added to an entry-level Junior model to give the range an affordable lead-in price (and make MINIs look expensive), but the real changes came with the introduction of clever MultiAir 1.4-litre petrol units in the Spring of 2010. Most buyers opted for the 135bhp version of this unit, but there was also an even cleverer 170bhp variant fitted to the hot hatch Cloverleaf flagship model, which also featured active suspension, a first for its class. An entry-level 105bhp version of this engine was kept back until 2011. Work was also done on the diesel front, with the introduction in mid-2010 of a torquey 95bhp 1.3-litre JTDm2 unit to replace the older diesel 1.3, with the same technology used in a 1.6-litre JTDm2 diesel, also kept back until 2011.

Not for Alfa a supermini of box-like proportions or humdrum hatch-back styling. The MiTo styling turns heads with its tear-drop headlights and distinctive grille. Design passion and flair is evident in a car that fans will recognise shares front end styling traits with the Alfa Romeo 8C Competizione supercar. The looks are not just for show as the MiTo is extremely aerodynamic with a drag coefficient of just 0.29, a great bonus in terms of fuel efficiency and performance. Many consider the MiTo's interior to be one of the best available in any Alfa Romeo currently available. The gaming and iPod generation will feel particularly at home, as standard across the range is the MP3-compatible radio and CD player featuring the controls mounted on the steering wheel. Fans of music on the move might seek out a used version which has the optional Bose audio system installed. Air conditioning is also standard across the range and Alfa Romeo have made a feature of safety with seven airbags, anti-whiplash head restraints and hazard warning lights that flash under emergency braking. These items are fitted in all trim levels, which should make used car shopping easier. There is also a wide range of electronic technology, including ABS brakes with electronic brakeforce distribution to maximise their effectiveness, Vehicle Dynamic Control (which co-ordinates with ASR anti-skid control) and Cornering Brake Control to keep things relaxed when conditions turn wet, slippery or icy. Well built and durable, while the MiTo is a three-door hatch, the rear seats will accommodate a couple of adults, though clambering into the rear can be a bit of a tussle. At just 4.1-metres long, 1.7-metres wide and 1.4-metres tall, the MiTo will fit into any garage and even the tightest city parking slot should not pose a problem. The MiTo's Euro 5 engines are highly efficient, even more so if you get an example built after early 2010 which will feature standard Start-Stop technology that cuts the engine in traffic or at the lights to save fuel. Cheapest to run is the 1.3-litre JTDm2 diesel which returns 65.7mpg on the combined cycle with CO2 emissions of just 112g/km. The 135bhp 1.4-litre MultiAir turbocharged petrol returns 50.4mpg on the combined cycle with CO2 of 129g/km, impressive given the car's performance. Expect insurance in the 8 to 18 range on the 1-50 groupings scale. 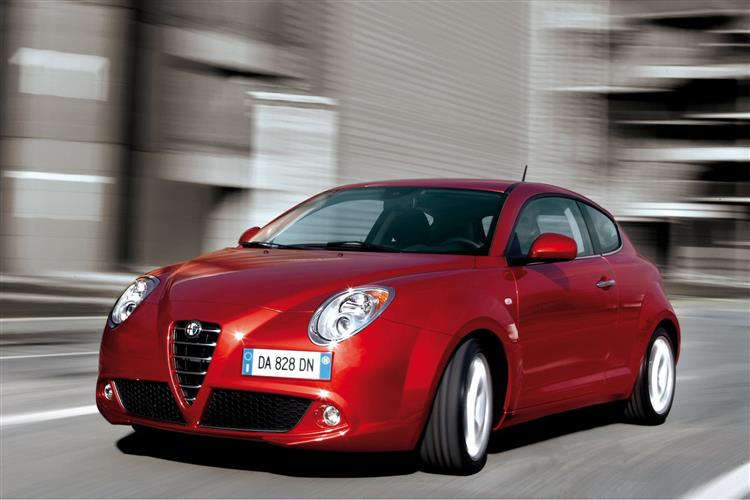