As names for cars go, Phaeton perhaps never had the best start in life. The son of the sun-god Helios, when Phaeton ("the shining one") finally learned who his father was, he went east to meet him. He induced his father to allow him to drive the chariot of the sun across the heavens for one day. The horses, feeling their reins held by a weaker hand, ran wildly out of their course and came close to the earth, threatening to burn it. Zeus noticed the danger and with a thunderbolt he destroyed Phaeton. He fell down into the legendary river Eridanus where he was found by the river nymphs who mourned him and buried him. Hardly encouraging stuff and when some commentators heard of Volkswagen's plans to introduce a luxury saloon they predicted a similarly rapid demise. The Phaeton, whilst never cranking out sales to rival the Mercedes S-Class, nevertheless made some respectable numbers in the UK. Enough to justify the huge and shiny factory in Dresden? Perhaps not, but if you're after a nearly new luxury car bargain, the Phaeton might yet have its moment in the sun.

The history of the Phaeton is closely tied in with one man: Dr Ferdinand Piech. This former Chairman of the Volkswagen Group is a fascinating character, the son of Louise Piech, Ferdinand Porsche's daughter, with a considerable pedigree to live up to. With a long and illustrious motorsport track record that included developing the Audi Quattro, Piech was a clinical perfectionist with some unusual habits. He detested air conditioning systems and insisted the Frankfurt Show did without air conditioning. He even carried a personal toolkit so that he could open hotel windows fully to ensure ambient climate! Until his retirement in 2002, Piech seemed intent on expanding the number and scope of the Volkswagen Group's marques beyond all recognition. SEAT, Skoda, Audi, Lamborghini, Bugatti and Bentley all came under the Volkswagen Group banner and models overlapped, ending up with some strange creations. A Volkswagen that looked like a Lamborghini was built, set a series of records and was then killed off. Then we had a Skoda that was bigger and better equipped than some BMW 5 Series models, before numerous Volkswagen and Audi models in direct competition until finally the Phaeton arrived, a £70,000 limousine that shared its badge with a £7,000 shopping trolley. Two models were introduced in May 2003, the 3.2-litre V6 and the 6.0-litre W12 with the 4.2-litre V8 and the mighty 5.0-litre V10 TDI diesel following soon afterwards. Long wheelbase versions were announced in May 2004 and by the Autumn of that year, there was a 3.0-litre V6 TDI diesel for buyers to consider. The facelifted Phaeton hit the showrooms in September 2007 with tweaked headlamps and a reprofiled bonnet. The centre console was also redesigned and the Pheaton received an upgraded 3.0-litre TDI engine with 230bhp and a 29.5mpg average economy.

What You Getword count: 386

The interior will be familiar to most Passat drivers, the layout of many of the controls being similar, but the materials quality is a league removed, the comfort features mind-boggling and the sheer space a distinct revelation. The five-speed automatic transmission's take up is so smooth that it comes almost as a surprise to see the view outside changing, your inner ear not registering the fact that the car has started rolling. The adjustable damper settings vary between 'blancmange in the midday sun' and merely soft, but high speed body control is always kept well in check. The air conditioning is exemplary, most of the airflow being directed through a set of mesh grilles on the top of the dashboard, providing effective temperature control without annoying draughts. There are vents on the fascia itself, and should you require a blast of air, wooden covers slide back automatically to reveal the vents beneath. The 3.2-litre V6 model features a stereo with CD autochanger, ten speakers and a 230-watt output which seems good going until one samples the High End 12/12 system fitted to the W12. This features 12 speakers and 300 watts of music power running through a Dynamic Sound Processing filter. This lets you choose from a number of different sound effects such as concert hall, studio, open air, jazz club and so on. Rear seat accommodation is superb (even if you don't opt for one of the long wheelbase models), passengers getting their own air conditioning controls but legroom isn't quite as generous as in the long wheelbase versions of the 7 Series and S-Class. Lesser models feature a conventional three-seat bench, but the W12 gets two individual rear seats that can be electronically reclined. The attention to detail is impressive throughout the Phaeton. Revolutionary construction techniques at Volkswagen's astonishing Dresden factory have resulted in panel gaps that are incredibly tight, paint that's as smooth as polished onyx and some interior features that have to be seen to be believed. The front cup holders are a case in point. Just when we thought Saab had developed the world's most elegant cupholder, the Phaeton aces it. These are activated by depressing a pair of wooden circles in the centre console to reveal rubber-lined recesses. Even the beautifully cast aluminium hinges of the bootlid are worth investigation. 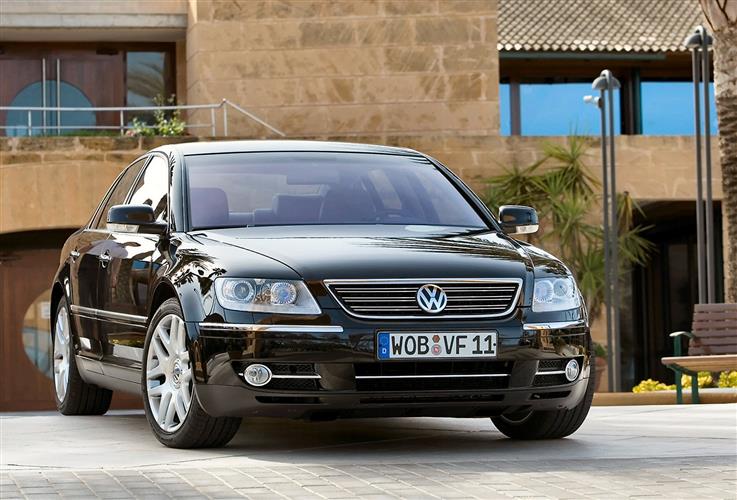