GET A ROOM (some text hidden)

There's a lot of extraneous baggage tied up with modern motorcars. Manufacturers spend billions massaging the public's perception of their products with glossy advertising and clever marketing devices. Many of the vehicles themselves display at least an element of style over substance. Skoda's Roomster serves a refreshing break from the norm in that it's an unassuming vehicle designed to fill a role, the role of affordable family transport. There are no gimmicks and buyers seeking a cheap, practical way of getting the kids and a bit of luggage from A to B should like it.

Skoda's model range immediately prior to the arrival of the Roomster MPV played things very much by the book. The products were good but there wasn't very much out of the ordinary going on. When news surfaced that a supermini-based MPV was to be added, the expectation was of another competent but formulaic effort. The Roomster took a different tack. Van-based MPVs had been popularised through the 90s by manufacturers sticking windows and seats in their small commercial vehicles to create utilitarian but cheap and hugely spacious MPVs. The Roomster followed on in this tradition except that it lacked too many obvious commercial vehicle origins and that, for many used buyers, will be deemed a considerable plus. The Roomster made its debut in the summer of 2006 riding on Fabia supermini underpinnings which are also common across the Volkswagen Group's other supermini products of around the same time. The engine range was chosen very much to provide economy rather than performance and includes 1.2, 1.4 and 1.6-litre petrol units with 1.4 and 1.9-litre diesels. Trim levels were imaginatively titled Roomster 1, Roomster 2 and Roomster 3. The Roomster Scout was introduced in early 2007. It brought a more rugged appearance to the Roomster's exterior with side body mouldings, a raised ride height, front fog lights and roof rails but always looked to be fighting a losing battle against the quirky lines of the standard car.

The Roomster is a car of two halves - or 'rooms' as the Skoda PR machine would have us refer to them. The 'Driving Room' is the area occupied by the driver and front passenger and it feels very much like that of a conventional family hatchback. The driving position is comfortable, with a good degree of adjustment and much less upright than in most MPV products. Quality materials have also been used and build quality is strong. As you progress rearward, you enter the Roomster's 'Living Room' and it's here that the vehicle's van-like silhouette pays dividends. The roofline steps up, allowing the rear seats to be mounted 46mm higher than those in the front: this boosts the space available to passengers. Leg and headroom are both extremely generous and there's a light, airy feel to the space thanks to the large windows. An optional panoramic glass roof increases this effect with Skoda pointing out that children become bored more quickly if they don't have a good view of the scenery. The rear seating has also been thoughtfully designed. All three sections of the rear bench are individually foldable and removable. They also recline as well as sliding fore and aft so that owners can choose either to maximise passenger legroom or to bump up capacity in the extremely generous boot behind. This boot is accessed through a large tailgate which lifts to reveal a capacity of 450 litres. Then, depending on the position of the rear seats, owners have the option of increasing that cargo space right up to a truly van-like 1,780 litres - which is achieved when all three seats are positioned in the garage at home. All this helps to open up a wide range of potential interior configurations for the Roomster - a real strength when it comes to meeting the varying needs of modern families. 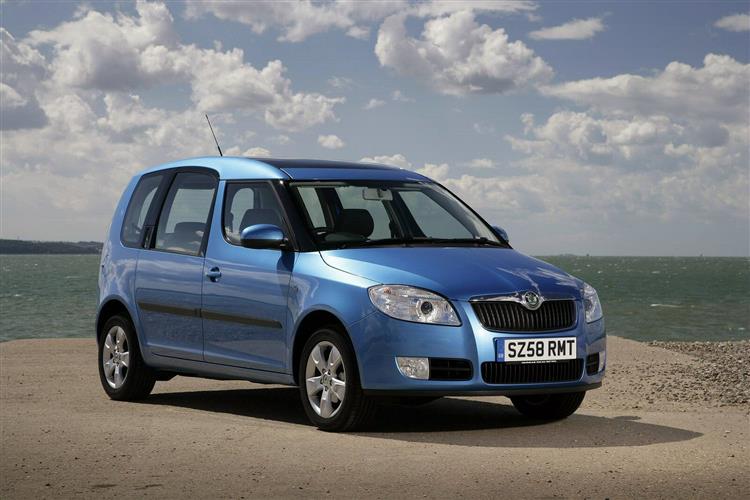