It was as if a light had suddenly pinged on in the Bentley product design department. "Get stylist Dirk van Braekel on the phone. Tell him that Bentleys don't have to be square." The Continental GT coupe was a very bold move, marking the first Bentley to be delivered under the stewardship of the Volkswagen Group. Of course, the simple and safe thing for the company to have done would have been to ape the styling of previous Bentleys in a pastiche of Britishness as they eased their Rohans under the table. Fortunately it didn't work out like that and instead, we were treated to one of the most technologically advanced cars ever seen. Here's how to track down a decent used example.

This bold take on what a modern Bentley coupe should represent was first unveiled at the Paris Motor Show in September 2002. Drawing almost universal acclaim, few were prepared for quite what a technological tour-de-force this model represented. Advance orders poured in and when the cars first appeared in dealerships in March 2003 business was, to say the least, brisk. Beloved by Premiership footballers and raffish city boys alike, the Conti GT spawned a special edition 'Diamond Series' and, in summer 2006, a convertible GTC model. The 600bhp Speed model arrived in mid 2007 billed as the first 200mph Bentley. At the same time the standard GT models received a number of revisions many lifted from the Speed model itself. Weight saving measures knocked 35kg from the car's kerb weight while low friction dampers boosted ride comfort and the steering was tweaked to give greater feel. A new exhaust system helped deliver a 3.5% reduction in emissions and economy.

What You Getword count: 365

Here is a Bentley that weighs in at Porsche money, that stakes a claim as the most technologically advanced car on sale, and which at the time of launch, was billed as the world's fastest four-door coupe. Powered by a 6.0-litre twin turbocharged W12 engine good for 555bhp, with four wheel drive and a paddle operated gearbox, the Continental GT was born in a virtual world. Every nut, bolt and washer was designed in concert with the Data Control Model - the computer simulation that would then design the tooling to physically build the car. Certain Bentley trademarks endure - the bullseye chromed ventilation outlets and the organ stop controls, but don't get the impression that this interior is a quaint retro pastiche. A touch screen LCD display on the centre console controls the air conditioning, satellite navigation, computer information and entertainment systems, whilst many of the minor controls can be operated without removing hands from the steering wheel. It's this blend of old and new that's particularly fascinating. Craftsmanship techniques have been similarly updated. For instance, wood paneling can be dramatically curved in a way that was once impossible. By the same token, while the leather is still applied to the car with the same hand crafted care, it's cut from hides using a digitized process that reduces waste and optimizes efficiency. 400 Continental GT Diamond Series cars were produced featuring exclusive 20" 12-spoke forged alloy wheels. The Continental GT was already fitted with the largest brakes on any production car but the ones on the Diamond Series are bigger. The black 8-piston callipers that peep purposefully from between the wheel spokes clamp down on 420mm carbon-silicon carbide cross-drilled discs at the front and 356mm versions of the same at the rear. Inside, the Continental GT Diamond Series is based on the Mulliner Driving Specification package that was developed by Bentley's bespoke coachbuilding division to give an added sporting dimension to the standard car. Quilted leather seats and door casings feature along with drilled alloy pedals and a sports gear lever in chrome and leather. The ubiquitous Bentley wood finishes are either dark stained walnut or piano black wood for a more contemporary feel. 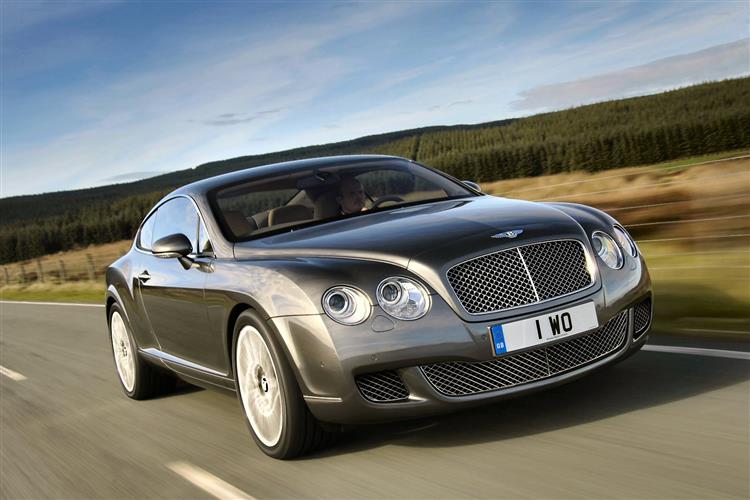