It seems that there are some smart guys in the Ford product planning department. They tapped into the fact that there is a whole swathe of thirtysomething parents who don't actually want to look as if they've totally given up to the call of pipe and slippers. Just because you need a vehicle big enough to haul the family and its paraphernalia around doesn't necessarily mean you need something totally boring. The S-MAX is a people carrier with a welcome bit of attitude and one that's surprisingly good to drive. It's been a huge hit and used examples are now starting to appear in meaningful numbers.

In developing the S-MAX and MK3 Galaxy twins, Ford decided that it needed a greater element of control over the build of its large MPVs than it enjoyed with the previous generation Galaxy. This was built alongside Volkswagen and SEAT products in the Autoeuropa factory in Palmela, Portugal and the mix of Volkswagen and Ford parts was never a happy one, the old Galaxy being plagued by reliability issues that gradually got ironed out as it was developed. With the S-MAX, Ford took control, moving production to the Genk plant in Belgium. An instant success, the S-MAX narrowly pipped the Opel Corsa and Citroen C4 Picasso to the 2007 European Car of the Year title. It arrived in UK dealers in summer 2006 and registered some serious success. In May 2007, Ford added the 130bhp TDCi 2.0-litre diesel engine to Durashift automatic models in the S-MAX line up. ESP stability control was also fitted across the range, the Titanium model received an improved driver control system and there was also an optional Sport pack for Zetec and Titanium models. In mid-2008, flexifuel and 2.2-litre TDCi models were added to the range along with equipment upgrades.

Let's get to the heart of any MPV style vehicle - the seats. Ford's designers appear to have become fed up with Vauxhall taking all the plaudits for clever seating solutions and have come up with a system of their own. FFS (Ford FoldFlatSystem before you attribute a baser meaning to that acronym) allows 32 different seating permutations. The second and third rows of seats all fold flat to form a genuinely huge load floor that measures 2.0 by 1.15 metres which is about as big as a double bed. In addition to the Ford FoldFlatSystem, a number of lashing points are located across the floor and on the cabin sides, helping to prevent your belongings from destroying themselves if you do fail to resist the Ford's sporty character. The perennial complaint of seven-seat vehicles, namely that there's no room for luggage when all seven seats are occupied, is partly addressed by the S-MAX which offers 285 litres of space with all seats in place. This is up 18 per cent over the old MK2 Galaxy. The real answer to this question however, is staring buyers right in the face. Buy a decently sized roofbox for those rare occasions that you are going to be loaded to the gunwales by seven people and their tat. If you do wish to run the S-MAX in removal van mode, it'll heave around up to 2,000 litres of goods with all the rear seat folded flat. There are also no fewer than 26 different cubbies located around the cabin so you'll need to know where you left that key/credit card/wedding ring or it could be a lengthy search. In total, there's a full 90 litres of oddment stowage in total. The fascia design of the S-MAX reflects the exterior lines in its calm maturity. The riot of bisecting lines, angles and arcs that used to typify Ford dashboards was replaced by a quietly-styled dashboard with classy materials and no outrageous gimmicks or cheap attempts at creating showroom impact. Some of the silver plastic finishes may be prone to scratching over the longer term but overall the cabin is a step removed from the 'mainstream' norm. The double windscreen pillar can make three quarter visibility a bit touch and go at roundabouts but aside from that, Ford have really committed to safety with this model. An ultra-rigid passenger cell is a good start point, but there's also a recently-developed Interactive Vehicle Dynamics Control (IVDC) system that controls all of the other safety systems in a cohesive manner. When those include Continuously Controlled Damping (CDDC), Electronic Stability Program (ESP), Adaptive Cruise Control (ACC) with Forward Alert (FA) and Collision Mitigation By Braking, that's quite some integration task. Factor in the anti lock braking system, Hill Launch Assist (HLA) and a Tyre Pressure Monitoring System and you have a wide array of available safety functions that have netted the S-MAX a coveted five-star EuroNCAP safety score. 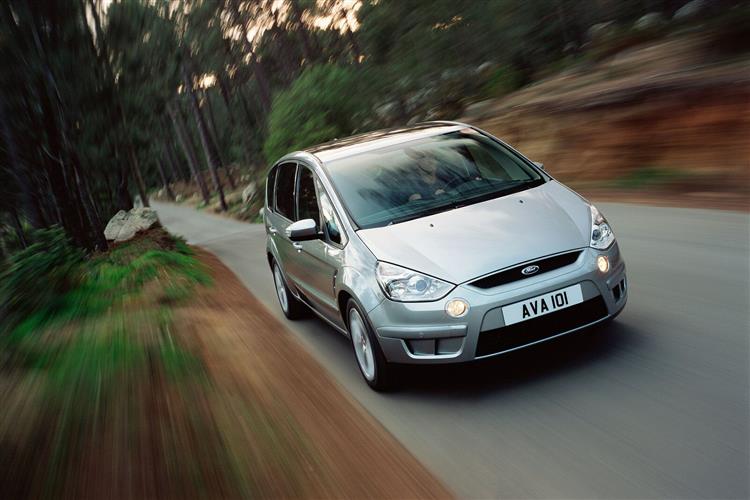