EVERYTHING BUT THE GAL (some text hidden)

Sometimes nothing other than a proper large MPV will do. Ford's original Galaxy used to be a large MPV and then all of a sudden it wasn't. No, it didn't shrink in a hot wash or anything like that: rather the market changed and suddenly people wanted bigger and better. Stuck in a relationship with Volkswagen and SEAT, Ford's hands were tied. With the 2006 model year Galaxy, the gloves came off and Ford showed what its considerable R&D budget was capable of when given free rein. The Galaxy has won over even the most curmudgeonly reviewers and the public have taken to it as well. Here's what to look for when buying used.

In developing the S-MAX and MK3 Galaxy twins, Ford decided that it needed a greater element of control over the build of its large MPVs than it enjoyed with the previous generation Galaxy. This was built alongside Volkswagen and SEAT products in the Autoeuropa factory in Palmela, Portugal and the mix of Volkswagen and Ford parts was never a happy one, the old Galaxy being plagued by reliability issues that gradually got ironed out as it was developed. With the MK3 '06 model year Galaxy, Ford took control, moving production to the Genk plant in Belgium and build quality has tightened considerably as a result. As well as being a successful car, the Galaxy is a smart one, sharing most of its DNA with the S-MAX and riding on what is effectively a Mondeo chassis. This means that it drives not unlike a rather taller Mondeo estate which, if you've never had the chance to get behind the wheel of one, is high praise indeed. The public certainly thought so and embraced the Galaxy as the default choice among larger MPVs. In May 2007, Ford added the 130bhp TDCi 2.0-litre diesel engine to the Galaxy line up for Durashift automatic models. ESP stability control was also fitted across the range, while the Ghia model received an improved Convers+ driver control system. In mid-2008, flexifuel and 2.2-litre TDCi models were added to the range along with equipment upgrades.

What You Getword count: 390

Like the S-MAX, this Galaxy's design marked a departure from Ford's previous 'New Edge' styling theme which, it appears, is now old hat. Instead, Ford's later direction was dubbed 'kinetic design' and followed the lead of their iosis concept car. Whereas New Edge was all about sharp edges, rakish planes and boldly intersecting arcs, kinetic design was more organic in its look, and featured more voluptuous, muscular curves and sporty, dynamic stances. That said, you won't need to clock the badge on the back of the Galaxy to figure out what it is. The front end of the car is immediately recognisable as a Galaxy but put the old and new cars side by side and there is, in fact, very little commonality. The face of the Galaxy also looks broadly similar to that of the S-MAX, due to the fact that the head lights and bonnet are the only body parts the two cars share. The big change with the Galaxy's styling over its predecessor comes in the glasshouse. The old car featured a low, horizontal waistline whereas the latest car wears its belt a little higher and features a far more rakish wedge shape. You'd even go as far as to say this Galaxy is a bit of a looker. Move round to the rear end and the good news continues. Big tail lamp pods nuzzle up against the black surround of the rear window glass and the low rear valance gives the Galaxy a dynamic 'sucked to the tarmac' sort of look. Were the S-MAX not to exist, it would be easy to imagine a seriously sporting version of the Galaxy. That the S-MAX is even better looking and more dynamic means that it gets the big horsepower and the sexy accessories. The Galaxy isn't without its appeal though. Let's get to the heart of any MPV style vehicle - the seats. Ford's designers appear to have become fed up with Vauxhall taking all the plaudits for clever seating solutions and have developed a system of their own. FFS (Ford FoldFlatSystem before you attribute a baser meaning to that acronym) allows 32 different seating permutations. The second and third rows of seats all fold flat to form a genuinely huge load floor which measures 2.0 by 1.15 metres - that's about as big as a double bed. 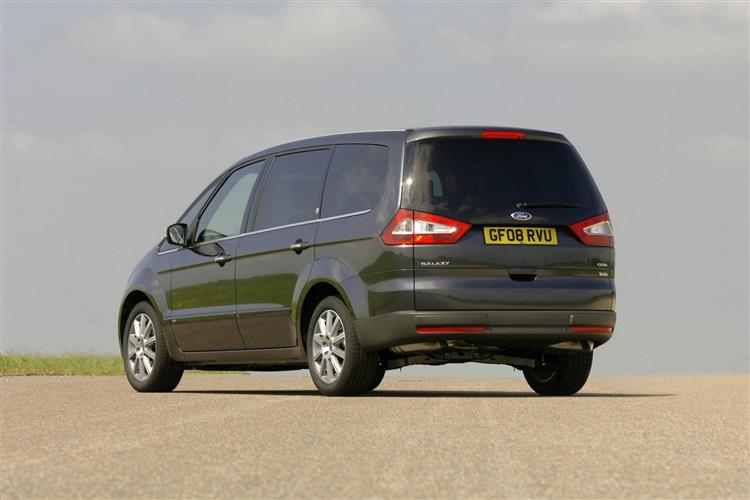