People carriers, MPVs, call them what you like, there's a similar concept behind the lot of them. It's to do with providing more practicality and versatility than is usually on offer in a conventional car. When Ford launched its C-MAX, there was some debate over how effectively it actually achieved the MPV goals. Some felt that the five-seater C-MAX didn't do a whole lot more for the family buyer than the Ford Focus hatchback on which it was based. Fortunately, the C-MAX also mimicked the excellent Focus in other ways and following an extensive facelift in 2007, its talents became easier to appreciate.

The C-MAX was launched in 2003 as the Ford Focus C-MAX but here we're concentrating on the post-facelift cars which arrived early in 2007. By that stage, the Focus part of the name had been dropped and, importantly, Ford's MPV range had been supplemented by the arrival of a new Galaxy and the S-MAX in 2006. Unlike the larger S-MAX and Galaxy, the C-MAX is a compact MPV that went up against rivals including the Vauxhall Zafira, Citroen's C4 Picasso and Renault's Scenic. When it was launched with five seats and no option for a seven-seater version, the C-MAX looked a little under prepared for a marketplace where the majority of the big players were at least available in seven-seat guise. With the arrival of the S-MAX in particular, the Ford MPV range looked a lot more balanced and comprehensive. Customers who couldn't fit their lives in a five-seat C-MAX but didn't want a frumpy large MPV had somewhere to go other than a rival manufacturer's showroom. This left the C-MAX free to compete with the five-seater competition, a job it did rather well with its sharp driving experience and tidy looks. Those looks gained a sportier edge when the 2007 facelift was brought in and the C-MAX was finally replaced by an all new model in 2010. Tellingly, the 'new' C-MAX was immediately available in standard form or as a Grand C-MAX with seven seats.

Ford didn't need to do too much when facelifting the C-MAX as it was already a very competent product. Endowing it with a little extra personality and desirability was the name of the game with the revamp and the results were good. The styling is a good deal less introverted on these later cars with a redesigned front end that includes elements that appeared on the S-MAX in 2006 and were rolled out across the Ford range. Most notable are the trapezoid lower front grille, a redesigned upper grille, headlights and tail lamps. If the optional bi-xenon lights are specified, a light strip runs across the top line of the lamp unit and all models have LED tail lights. Ford's rear seat flexibility system remained as the ace in the C-MAX hole. A 40-20-40 "tip and tumble" rear bench sees the centre section flip rearwards into the luggage compartment, leaving the remaining two seats to slide diagonally along a runner towards the centre of the car. This gives prodigious levels of space for four. With 100mm of extra legroom and 60mm of additional shoulder room, even extravagantly dimensioned passengers should be able to find space in the back of the C-MAX. Even in the standard three-abreast bench position, there's plenty of room with 946mm of legroom and 582 litres of luggage compartment space. Remove the rear seats altogether and there's a monstrous 1,692 litres available. Equipment levels were also increased on this generation C-MAX. Some standard features that are noteworthy include an MP3 connector socket in the centre console, while the Titanium model features blue tinted glass. The range ran from entry level Studio trim through Style, sporty Zetec and the rather techno Titanium. Of the options available, the panorama glass roof was perhaps the most desirable. This covers almost the entire roof area and features internal blinds and a Solar Reflect coating to ensure you don't feel as if you're driving a mobile propagator. Sports packs were also available for the first time on the 2007 cars. These included an alloy wheel upgrade, sports suspension, racy seats, a three-spoke steering wheel and a body coloured spoiler. 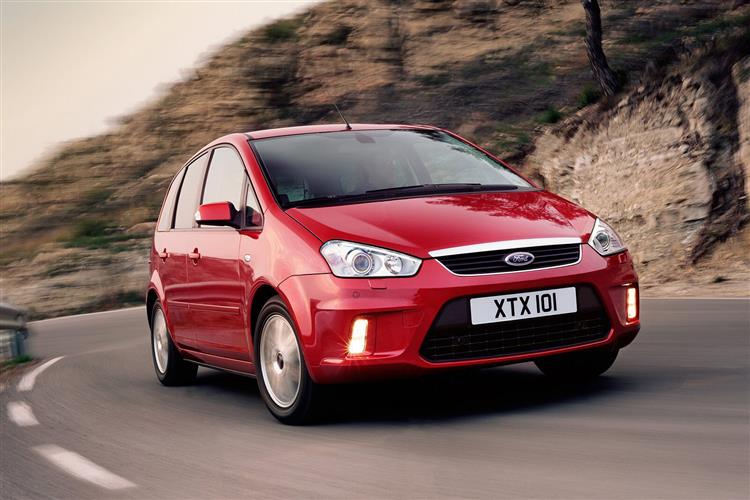