Although to the casual observer Nissan appeared to be overburdened with 4x4 models at the time of the Pathfinder's arrival, there's always space for a model as good as this. Based loosely on the Navara pick up chassis, the Pathfinder slotted in above the X-Trail and Terrano and below the sporty Murano, offering a rather more 'lifestyle' alternative than the desert-issue Patrol. Although the engine line up is limited, the Pathfinder has became a global success for Nissan and looks like decent business on the used market.

For a vehicle that's only been around since March 2005, the Pathfinder has come in for a lot of attention. Engineered for the European market at Cranfield, Bedfordshire and built at Nissan's NMISA factory in Spain, the Pathfinder's rugged styling - derived from the 2003 Dunehawk show car - is both practical and good-looking and aimed at young active families. When it was first introduced, it was offered solely with a 2.5-litre 172bhp dCi diesel engine and was available in S, SE, SVE pr range-topping T-spec guises - the S being supplied with five seats and the rest with seven. Five months later, Nissan launched a 4.0-litre V6 engine which, they claimed, made it the quickest seven-seat 4x4 available at the time. Based on the 3.5-litre 350Z coupe's engine architecture, this fleshed-out the engine line up for those who could never countenance a diesel. Further changes occurred in May 2006. Euro NCAP announced that the Pathfinder had achieved a four-star rating for adult occupation protection making it one of the safest big 4x4s available. At the same time, Nissan revised the entire Pathfinder line-up and cut prices by as much as £3,000. In addition to this, the company threw in £2,000 worth of Technology Pack on a new Pathfinder Sport trim level. In place of the old S, SE, SVE and T-spec line-up, the Pathfinder now came in three varieties: Trek, Sport and Aventura. In 2008, the entry-level Trek model was given a third row of seats giving all Pathfinders a seven-seat capacity.

There's often a substantial gulf between the way 4x4 buyers actually use their 4x4 vehicles and the utopian visions laid out in commercials and publicity material. The ad men present the public with a rose-tinted vista of family life in which every spare moment is crammed with wholesome outdoor activities from horse riding, to mountain biking and rambling to kite flying. Of course, the 4x4 vehicle itself is the hero of the piece: always on hand to be loaded with beaming children and expensive equipment, ready to trundle off into the countryside at a moment's notice. Nissan's Pathfinder 4x4 certainly has the ability to access remote locations with a family of catalogue models and their camping gear safely stowed inside but it's also adept on the school run, on the motorway and in the supermarket car park - the places where real people are most likely to use it. The Pathfinder range is split into three trim levels named Trek, Sport and Aventura. Until 2008, the entry-level Trek models did without the rearmost row of seats and so offered a five-person capacity but all other Pathfinders had the ability to seat seven. Externally, the Nissan family face, as seen on 4x4 models across the manufacturer's range, is very much in evidence. The V-shaped grille with central Nissan badge gives a suitably imposing frontal view, one which is accentuated by a wide air intake in the underbumper and bulging wheelarches. As you ascend the range, more styling features are added to spruce-up the vehicle's appearance, 'Pathfinder'-branded roof rails help, as do front fog lamps and side steps. Overall, it's a cohesive and modern, if somewhat unremarkable, design which lacks the impact you get with a Discovery but certainly isn't going to offend many people. The interior decor is tidy and largely functional, although there's little by way of design flair in evidence. The air-conditioning is controlled by dials that rock from side to side: these are unusual but they seem highly counterintuitive and don't really represent an improvement over traditional twisting dials. Leather upholstery is standard on Aventura models but the cloth trim on lower spec derivatives has a netting-like texture and may prove difficult to clean once your kids have melted a chocolate bar to it. The Pathfinder is available with a variety of nice technological features including Nissan's excellent Birdview satellite navigation system, a colour reversing camera and keyless entry but even the base models feature dual-zone climate control, electric heated mirrors, electric windows, ESP and traction control. 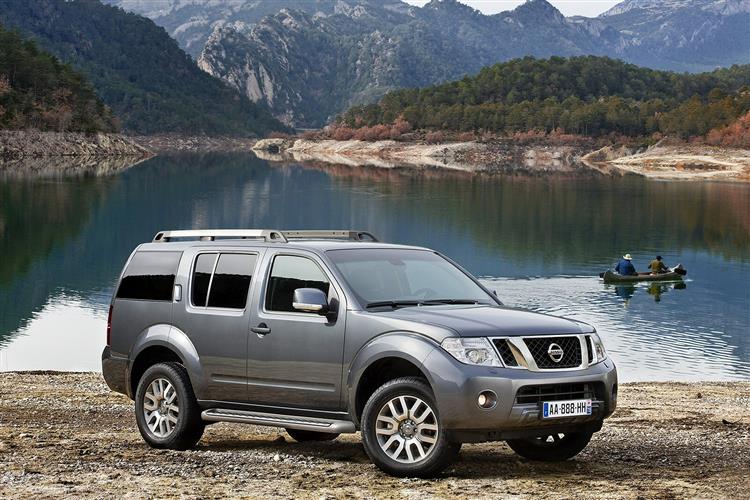