Think of the second generation Vauxhall Tigra as a direct successor to the original and you're likely to come away very confused. Yes, it is a coupe of sorts, but one with an extra trick up its sleeve. Whereas the original Tigra was a cutesy coupe based on Corsa underpinnings, the post millennial version features a voguish folding hard top. It's a far more appealing and better engineered Tigra than ever before and quite rightly is in some demand as a used car. If you can persuade an owner to part with one, here's the low down on what to look for.

Although the hiatus between the two Tigra generations seems so much longer than three years, this is attributable to the cutting modernity of the second generation car rather than the perceived antiquity of the original. In short, when the Tigra was launched in Spring 2004, it suddenly made the opposition look very dated. The Peugeot 206 CC had long ruled the roost when it came to tots with folding hard tops but the introduction of the Vauxhall changed all that. Suddenly the Pug was yesterday's news and the Tigra was the hot ticket.

What You Getword count: 409

There's little doubt that the Vauxhall feels the more polished product than the Ford Streetka and the Peugeot 206 CC it was introduced to target. The interior quality is a long way ahead of its Ford rival and the hood is in a completely different league. The cabin features wheel-mounted audio controls, a metallic finished fascia and a tiltable steering column. Both seats are height adjustable and an electronic display panel is standard on all models. The standard car comes with 15-inch alloys, a CD stereo, anti lock brakes, twin front and side airbags and sports suspension. Trade up to the Sport version of the Tigra and Vauxhall include 16-inch wheels, a silver targa roofbar, a stereo that can handle MP3s, a remote controlled alarm and an alloy-effect centre console. Aluminium pedals, a leather-trimmed sports steering wheel and front fog lights are also included. A leather pack was offered as an option with seats, head restraints and door trims finished in hide and ESP was also available for those looking to safely explore the limits of the Tigra's handling. Vauxhall have the benefit of others' mistakes to draw upon in developing the Tigra. Many of the early coupe-cabriolet models looked the part but were cursed with woeful luggage space. This time round, the Tigra doesn't attempt to wedge in a pair of useless vestigial rear seats, instead offering a useful boot of 440 litres. Even with the hood cassette in place, there's 250 litres available - more than enough for a weekend's light luggage for two. There's a good deal of thoughtful attention to detail. The heated rear window features a special scratchproof glass and the tiny front and rear overhangs make the car easy to park. One thing has continued from the previous Tigra model. This is still a car that will sell on the strength of its looks. The 3D ellipsoidal headlamps and wrap-around tail lights have the requisite bejewelled looks and the wedge shape that rises from front to rear helps the Tigra avoid the pram look that afflicts many small convertibles. The rear section of the Tigra's roof structure couldbe specified in a contrasting colour; either Matt Star Silver or an aluminium shade, Matt Moonland, which sounds more like a 1960s record company executive. Alternatively, original buyers could opt for the targa roof bar finished in body colour. When this includes a hue as violent as Yellow Punch, it's enough to create quite an impression. 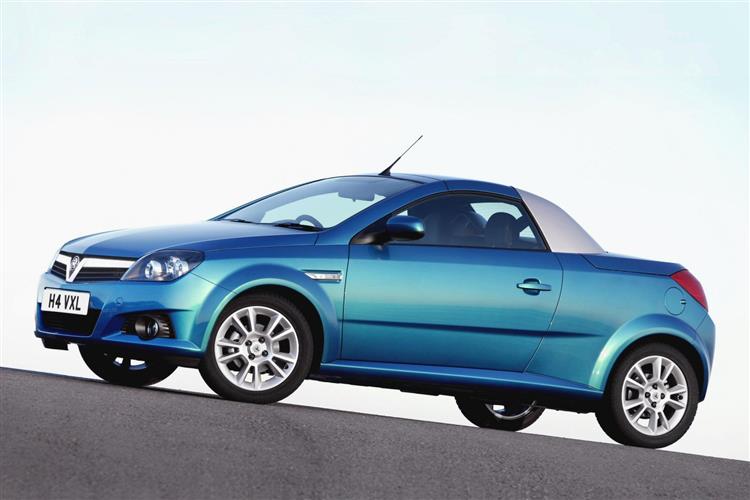