Citroen's C3 was the car that proved that superminis didn't need to be outrageously sporty in order to succeed. Concentrating instead on offering keen value for money and an unthreatening family oriented appeal, the C3 notched up significant sales and the diesel models in particular are some of the best superminis around. Picking up a decent used example shouldn't be too tricky with a number of well looked after low-mileage cars on the market.

Think for a moment about how the motoring press works. Most journalists are rabid petrolheads, largely made up of frustrated racing drivers and wannabe Jeremy Clarksons. Ride comfort, affordability, economy and practicality don't excite these types but that's exactly what the broad swathe of customers want from a supermini. As more and more superminis began to ride and handle like GTi pocket rockets, Citroen took a different tack. Their C3 range, unveiled in early 2002 was refreshingly unsporty. There was no GTi version, no potent engine; in fact Citroen made it clear there were no plans for anything as racy as a three-door version. With its smiling face and cute interior detailing the remorselessly benign C3 was about as cuddly as small cars. And the public loved it for the fact. The range was added to towards the end of 2002 with the emergence of an entry-level 1.1-litre engine, a 92bhp 1.4-litre HDi diesel and a Desire trim level but it wasn't until spring 2003 that the first major addition appeared in the curious shape of the Pluriel. Claiming to be the most versatile small car around, the Pluriel's complicated roof offered all sorts of variations of topless motoring, Citroen even claiming (somewhat optimistically) that with the rear seats folded and the bootlid dropped it also functioned as a light duty pick-up! In late 2003 the Euro4 compliant version of the 1.4-litre 8-valve HDi engine arrived, all models got ABS with EBD, extra equipment was added and list prices went up by £200 or so. In early 2004 we saw the XTR derivative with its 4x4 styling accessories and a 16-valve 1.4-litre engine was also added. Then at the start of 2005, the Stop & Start arrived bringing technology which turned off the engine when the C3 was stationary for better fuel economy as did a moderately sporty VTR derivative. A relatively far-reaching facelift was announced in the Autumn of 2005. Dynamically, the car was boosted by tauter suspension settings and enhanced steering feel. The front end received a nip and tuck with a more prominent grille and air-intake along with a larger Citroen badge. The biggest improvement was in interior quality with a new upmarket look and better materials. The SensoDrive gearbox was also reworked with a conventional gate introduced so the driver could see what mode they were in and chrome detailing on the shift lever.

What You Getword count: 653

The interior is also adventurously styled - which makes a change from all the other makers who seem to be slavishly aping VW Group products. As a result, instead of a dull Teutonic cabin, we've got one that goes its own way, light and airy with low window lines and bold, sweeping curves. Rock-hard seating, coalhole colour schemes and a fetish for aluminium inserts have all been forsaken in the quest to provide a functional, non-threatening family car. The dashboard has shades of toned-down Fiat Multipla, the lovely silver-trimmed circular vents appearing to warp the fascia as they bust gently through atop a voluptuous pod housing the stereo and air conditioning controls. The digital instrumentation is clear and easy to read and has a Saab-style 'black panel' that turns all but the most important functions off if you don't want to be distracted by them at night. More importantly, there are enough bins, cubbies and boxes to make locating a carelessly stowed bunch of keys the work of several minutes. ISOFIX child seat mounting points feature strongly and such is the C3's family orientation that an optional 'Child Pack' is available. No, this isn't a lockable trunk that stows problematic sprogs safely in the boot, it's a selection of extras that will hopefully offset just such an outcome. A child safety indicator on the dashboard monitors whether seat belts have been unclipped whilst safety locks can be activated or deactivated via a dash-mounted switch. A 12-volt socket at the rear, previously the preserve of MPVs, allows junior to play Gameboys without the ticking time bomb that is a battery failure/high score moment. Aircraft-style trays can be fitted to the back of the front seats with clip-in pen and cup holders and plastic bag hooks. The greatest feature is probably the simplest. A swing down mirror that's usually stowed behind the standard rear view allows you to keep an eye on the offspring without impeding your forward vision too badly. The innovation certainly doesn't stop there. Citroen's Moduboard system is a load bay dividing system that helps protect soft items from hard, clean from grubby and prevent bulky objects from racing across the load bay during spirited driving. Not that pedal to the metal antics are encouraged by the C3. The C2 will provide for those more concerned with uprated dampers than Pull-Up Pampers. Clever safety-conscious electronic features have been borrowed from the larger C5 - things such as speed-sensitive intermittent wipers with rain sensing activation, hazard lights that deploy automatically under severe braking as well as side airbags and comprehensive pedestrian safety features. The egg-like shape suggests almost MPV-like levels of interior space. Certainly at the front, that's true, with more elbow, head and shoulder-room than any other rival, not surprising when you consider that this car is wider than some Family Hatchbacks from the next class up, notably VW's Golf. At the rear, things are a little different. The three inches in length the C3 loses to a 5-door Fiesta shows here in the restricted legroom and the headroom isn't great either. Some compensation is the 305-litre boot, one of the largest in the class. With its full-length canvas roof in place, few would finger the Pluriel version as a convertible, the shapely glasshouse and the seemingly fixed rear window giving it the appearance of a quirkily styled three-door hatch. Slide the canvas section back, fold the rear window cartridge down into the spare wheel cavity and house the gloss finish roof rails in their deckchair like holder and you then have a full convertible. No rollover hoops or bulky tonneau covers sully the appealing shape. What's more, there's even a reasonable amount of space in the boot once the hood has been dropped. The main problem is that you can't store the roof rails in the car, so if you head out if full convertible mode, just pray it doesn't rain. 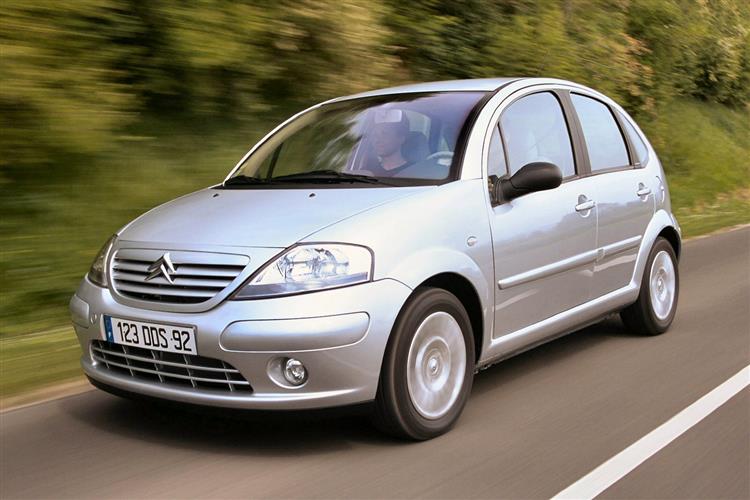