THE LIGHT FANTASTIC (some text hidden)

The Audi A8 had already established a formidable reputation as a technologically advanced, effortlessly cool executive saloon by dint of the first generation car. With the major manufacturers capable of throwing vast budgets at the development of these flagship models, the first generation A8's nine year existence seems remarkable. After 2000, the A8 was starting to look and feel a little behind the curve, and Audi were making great efforts to put it back at the forefront of the luxury class. The 2003 model year A8 did exactly that, offering a bigger, bolder take on the A8 theme. It has proved a notable success for Audi and has enabled them, in turn, to offer a bigger A6 model. As a used buy, the A8 has much to commend it.

Few cars received quite such a big budget promotional push as the launch of the 2003 Audi A8. It took almost a year to produce. Weeks and weeks of preparatory research in the Audi Tradition company archives were necessary. Around 600 people - Audi employees, creative experts from advertising agencies and production companies, photographers, a symphony orchestra, composers, directors and actors - were involved. The final edited version - put together from 30,000 metres of film material, elaborate photo shootings and retouching for advertising motifs - can now be seen in national print media and on television: the worldwide advertising campaign for the A8. Computer trickery showed the A8 haring around the long demolished Avus ring racing circuit in Berlin. All in all it took 340 hours of work at the computer to stage the 45 seconds so perfectly. An interesting contrast to computer technology: parts of the commercial were filmed using two 80 year-old hand-crank cameras to make the subsequently filmed historical scenes appear as authentic as possible. The effort was not without reward. Upon launch in the UK in June 2003, the Audi A8 instantly challenged Mercedes' S Class for the top spot in terms of sales, even though 3.7 and 4.2-litre Quattro models were the only derivatives initially available. Long wheelbase 4.0-litre TDi and 4.2-litre versions were introduced in September 2003 alongside the awesome 6.0-litre W12 model that was only offered in the longer length. 3.0-litre petrol and diesel models followed in the Spring of 2004. Spring 2005 saw the Audi single frame grille that had been reserved for the W12 models rolled out across the range. Various interior tweaks were made at the same time with more aluminium trim and an LED lighting system. Shortly afterwards, the 3.2-litre FSi engine was introduced as the entry-level point in the range and Audi rolled out the 650Nm, 326bhp 4.2-litre V8 TDi - proclaiming it as the world's most powerful production diesel engine. The 2.8-litre FSI Audi A8 arrived in September 2007 on an environmentally-friendly ticket.

The styling has followed an evolutionary theme, looking even more slippery than the rather bluff outgoing car, the sides now being contoured into an almost Jaguar-like fuselage. The front features chrome-ringed grilles above and below bumpers which look rakishly aggressive, whilst the back features a high mounted light cluster which doesn't. The interior has been given a thorough restyle too compared to the first generation model. One criticism that could be levelled at Audi's otherwise impeccable interior design was that buyers of the top line A8 weren't getting anything markedly different to the rep who'd lucked into an A3. The themes were all the same, many of the materials felt much alike and there were so many common parts. Great if you're the one with the A3, but not so good if you want something a little more exclusive. Audi has recognised this and has given the A8 an interior quite different to the usual classy coalhole. The instrument dials are raked back and trimmed with a light metallic theme that is dotted about the cabin. The steering wheel is a classy looking four-spoke item, nattily dished with recessed arms. It manages to make BMW's 7 Series tiller look rather inelegant. Accommodation is better than the old A8, a car that, unless you opted for the long wheelbase version, was pretty tight on rear legroom. The rear seats lack side support and are quite hard, but there's plenty of space. Headroom is acceptable without feeling as airy as an equivalent S-Class, but this helps in making the A8 feel smaller than it actually is, an asset when the time comes to confront a twisty road. 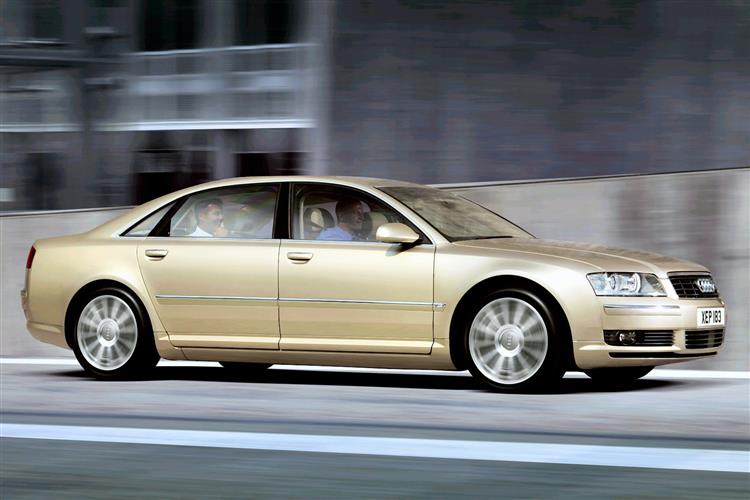