When it comes to buttoned-down saloon car rectitude, Mercedes-Benz has the market taped. Leave aside the gut-wrenchingly rapid AMG models and it has to be said that the C-Class, E-Class and S-Class models are about as straight as they come. It's easy to imagine senior suits in Stuttgart intoning that "For the saloon car, we have a procedure. The procedure must not be deviated from. Deviation will not be tolerated." Quite how the CLS slipped through the net is anyone's guess, but here's a car that takes the saloon car book of conventions, rips it to shreds and dances on the tatters. As a used buy, it's one of the most interesting saloon choices around.

The underpinnings of the CLS are never quite as radical as the banana styling would suggest, being ostensibly an E-Class chassis down below. This is no bad thing, the E-Class having improved beyond measure prior to the emergence of the CLS, but it's also a very clever piece of marketing from Mercedes. Ask most potential purchasers - and a good few owners - of the CLS and they'd take the S in the title as suggesting it's built on the bones of an S Class. Close, but no cigar. The basic CLS shape was first displayed at the 2003 Frankfurt Motor Show, dubbed the Vision CLS Concept. Mercedes was swamped with requests and speculative letters of intent should they ever decide to put the car into production. The hopes of enthusiasts were realised in 2004 when the car was displayed in virtual production-ready form at the New York Auto Show. Later that year, the CLS55 AMG hot rod was unveiled at Paris and the cars arrived in dealers in late April 2005. The range comprised the CLS350, the CLS500 and the CLS55 AMG petrol models as well as the CLS320CDI diesel. The racy CLS55 AMG was not long for this world, replaced in short order by the big capacity, naturally-aspirated CLS63 AMG in July 2006.

Walk around a CLS and - if you're a student of automotive design - you may well feel a gnawing sense of unease. What is it about this car that's so unusual? Yes, a four-door coupe isn't exactly conventional but that isn't it. After a while the realisation dawns that the CLS just plain doesn't seem like a German car. History has taught us that German cars feature clean, pragmatic styling. Even the more extrovert and successful German designs, such as Audi's TT, have a pared-down industrial hygiene about their bodywork. The CLS is different insofar that it is unashamedly Baroque, with an attention-seeking ostentation suffused throughout it. In short, this car looks American. The suspicion is well-founded, the CLS being largely the work of American stylist Michael Fink. It almost looks like an evolution of a Los Angeleno low rider from the late fifties and was always destined to be a very hot ticket in Mercedes' biggest export market. It's difficult to take in all of the details of the CLS styling at one go. The way the twin swage lines that run along the flanks become the leading edge of the front wheelarch is beautifully resolved and the big L-shaped front lights mark a welcome departure from the gawky 'peanut' headlamps seen on so many contemporary Benzes. Even the door handles look like something from an Art Deco design exhibition. Open the door and the surprises continue. In true coupe fashion, the CLS features frameless glass, the windows dropping a centimetre or so as you pull the handle. It's also a long way down to the driver's seat. Stand next to the CLS and you'll soon realise that it's a good deal lower than either a CL or a CLK coupe, the two big hitters of Mercedes' coupe range. The cabin is like no Benz currently offered, the fascia being particularly reminiscent of modern Jaguars. A vast plank of wood runs across the dashboard, punctuated by the ventilation controls and a deeply sunk instrument binnacle. If imitation truly is the sincerest form of flattery, then Jaguar should be coyly blushing. 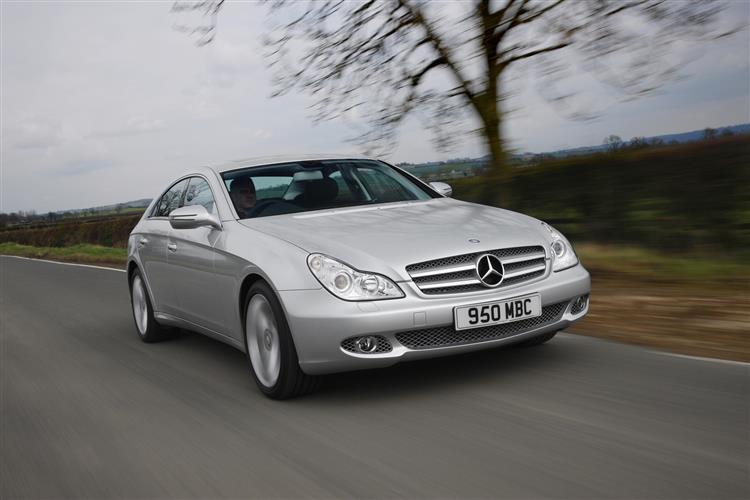