No mainstream car maker has reinvented itself quite as radically as Nissan. You don't need to wind the clock back that many years to find a me-too company producing dull but worthy and good. The Primera, the Almera, the Terrano, the QX: all technically decent cars but about as exciting as radio coverage of coarse fishing. The catalyst for this change was the takeover by Renault. Within a remarkably short space of time, Nissan was turning out exciting niche vehicles that people wanted to buy. The late shape Micra, the 350Z, the X-Trail and the Navara were just a few. To this list add the Note, a small MPV-style vehicle that thinks big. Used examples are now starting to appear in decent numbers and are well worth further investigation.

Originally unveiled at the 2004 Paris Motor Show as the 'Tone', the Note is part of a conscious move on Nissan's part away from slow selling conventional categories. The Note shares a connection with the X-Trail in that they were both designed by Toyota - Taiji Toyota that is - one of Nissan's most talented stylists. Toyota points out that the Tone is "tall, but not too tall. We wanted a roomy interior and the benefits of a high driving position but we did not want to make the car look top heavy. With the long wheelbase and body we feel we have achieved a shape that will appeal on both a practical and emotional level." Those of you who keep tabs on the politics of the global automotive industry will know that Nissan and Renault share a good deal of their technology, and it would be understandable to assume that the Note is merely Nissan's identical take on the Modus platform, but break out the tape measure and you'll find that this 'Japanese' car (European Notes are built in Tyneside) is a good deal longer, freeing up a little more room for back seat passengers. At 3.99m long, it's got fully 20cm over its French cousin. When it first arrived, press and public alike gave the Note a warm reception and since its inception it's been one of the best selling supermini MPVs in the UK, so used stock is available.

What You Getword count: 213

The interior feels very spacious and that's in no small part down to the fact that the wheelbase of 2.60m is longer than that of cars like the MK5 Volkswagen Golf. This available space can be optimised between luggage and rear passengers with the aid of a sliding rear bench seat as well as the usual folding rear arrangement. The Note's most interesting feature, however, is the split level luggage bay. Most would never know that beneath a flat loading deck there's a 250mm deep second layer that can keep valuables out of the way of prying eyes. Cup holders, bag holding hooks and umbrella stowing points also hint at the Note's attention to detail. Although the exterior design isn't going to set pulses racing, the Note has an athletic, wheel at each corner stance that gives it a rather more masculine look than the rather mimsy supermini-MPVs that have become the norm. The dashboard isn't going to have designers in black turtle necks swooning but it's a tidy piece of work with even the entry level models offering a level of fit and finish that's rare in this sector. Colour and material choices are far from conventional and the cluster of instruments around the centre console is rapidly becoming a Nissan trademark. 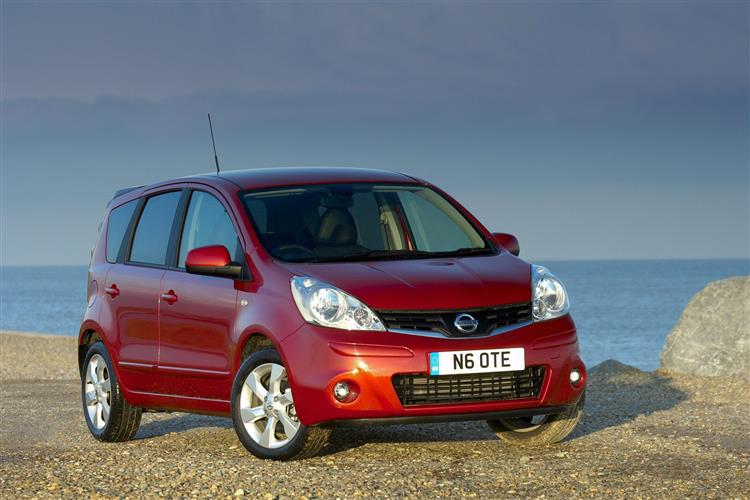