A LASTING IMPRESSIONIST? (some text hidden)

Deviating from a winning formula can be a big risk. Citroen knows this as well as any car manufacturer, having had a long history of big hits followed by rather impressive failures. The company has found it hard to hit a consistent winning groove and in replacing the massively successful Xsara Picasso with the far more complex C4 Picasso, did it deviate from the recipe for success? Sales suggest otherwise, the C4 Picasso finding a new swathe of customers who appreciate a little more luxury. This now translates into decent choice for the used buyer.

The Xsara Picasso was always one of those vehicles that showed quite how little motoring journalists matter. Rather disliked by most motor noters, the public couldn't get enough of it. Perhaps it was the keen pricing, the endlessly inventive incentives from dealers or just the fact that here was cheap family transport that wasn't Korean: all of that was enough to sell it to families up and down the country. Its successor, the C4 Picasso, is cut from very different cloth. We like the C4 Picasso and, it seems, so does the British car buying public. Vive le concord. The long wheelbase Grand C4 Picasso appeared towards the end of 2006, with the more compact model joining it in September 2007. The C4 Picasso was sold alongside the Xsara Picasso, Citroen rather running out of commitment and hedging their bets with both product lines. The engine selections consisted of 1.8 and 2.0-litre powerplants, petrol or diesel and four trim levels.

What You Getword count: 600

Although the C4 Picasso's athletic stance is the first thing to catch your eye, the second is the wide-angle panoramic windscreen that rises up and over the front seat occupants, doubling vertical visibility in the front to seventy degrees compared to 35 degrees in a standard MPV. Previous to this car's arrival, Vauxhall may have already offered a similar thing as an option on the MkIV Astra but this was the first time it had been fitted as standard to an MPV and the effect is just stunning, the sheer acreage of glass in front of the driver being at first a little unnerving. It's almost like the cockpit of a jet fighter. By slimming down the windscreen pillars, the effect of airiness and front visibility is increased still further. It's not just a styling affect either, the added field of view making it easier to spot motorbikes, cycles and pedestrians coming while preventing the usual craned neck when negotiating small roundabouts. I'm not sure if someone at Citroen has been getting a backhander from a glass manufacturer because the C4 Picasso also features the biggest sunroof in its class, the extensive side windows too help edge it towards having the largest glazed area of any mini MPV. All of this glass means that the vehicle needs a seriously punchy air-conditioning system to prevent it become a mobile propagator. The C4 Picasso utilises its available space very well. That wheel at each corner stance doesn't just look good, it also maximises space for the all important passenger cell. The boot has a 500-litre capacity which is about par for the course for a five-seater vehicle. Fold the rear seats down and there's a massive 1.734 litres of available space. The Grand C4 Picasso packages three rows of seats into a car 4.59m long (for reference a Ford C-MAX is 4.33m long, a Volkswagen Touran measures 4.39m, a Toyota Verso 4.36m and a Vauxhall Zafira breaks the tape at 4.46m) but the ingenuity of manufacturers in reducing the day to day impact of these compromises is where they earn their corn. The most common solution is to sacrifice a little room in the rearmost row and target these as 'occasional' seats for kids. The Citroen offers more space in the footwell on the rearmost set of seats although the raked roofline takes its toll for taller passengers. The more important middle row of seats reaps the benefits and offers more leg and elbow room than any of its competitors. With the vehicle configured as a five-seater, this car provides 576m of loadspace beneath the parcel shelf. Lose the second row of seats and there's a colossal 1,951 litres of room to play with. Many customers will be swayed by a showroom demonstration of how easy or otherwise the seats are to fold and the Grand C4 Picasso looks set to score in this department too. The second and third rows of chairs can be folded away under the floor without the need to remove the headrests to provide a flat surface that's ideal for loading. The whole design is a good deal more intuitive than the system used on the Vauxhall Zafira. Access to the back seats is good as well. Press a control on the edge of the outer middle seat and the seat cushion flips up to the seat back, the seat then slides against the back of the one in front. No more clambering with muddy feet over the middle row of seats or tearing the pockets off your trousers trying to lever yourself through a minuscule gap. 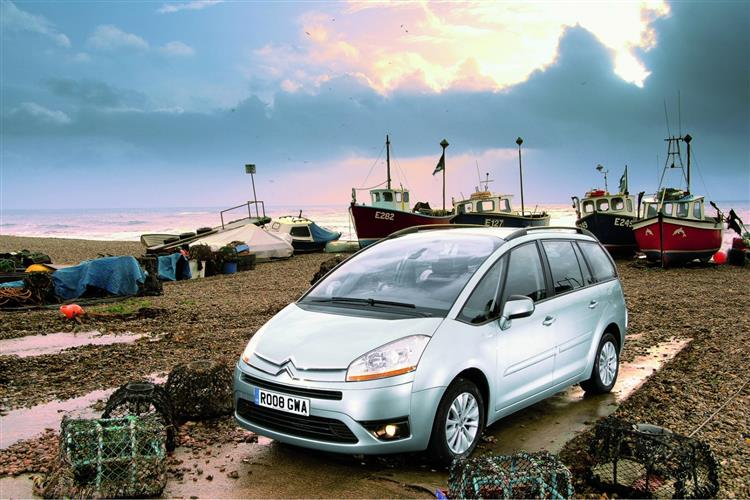