Mazda had long had a reputation as innovators, but the launch of the RX-8 elevated their reputation still higher. Not only did it boast a rotary engine - in common with all the RX series sports cars - but it was also a four-door coupe. Whilst other car manufacturers scratched their heads and stroked their chins, Mazda made hay and sold thousands. Can a used RX-8 be anything other than a potential for big bills or does Mazda's sweet handling coupe promise stress free reliability? Find out here.

When Mazda drew the wraps back from the RX-EVOLV, the 2000 show car that paved the way for the RX-8, few who saw it thought it would make production. Motor shows are full of cars like the RX-EVOLV, wild flights of fantasy that never get anywhere near sign off. Except that it did. With the RX-7 withdrawn from UK sale in 1995, many buyers were impatient for another Mazda rotary engined cracker and there was some slight disappointment in certain corners when the RX-8 was announced. The styling, while challenging and fresh, was nowhere near as slinky and menacing as the old RX-7. It looked as if Mazda had changed a street racer into a rather sit up and beg coupe. With four doors, it hardly looked like something that would put the frighteners on Porsche the way the RX-7 did. Still, despite, or perhaps because of, its less hardcore appeal, the RX-8 soon found favour with customers. Two models were available, one with 189bhp and another with a claimed 237bhp. A brief embarrassment followed when US versions of the '237bhp' car were found to be routinely producing 228bhp, and Mazda's power claims were rounded down in this country. Drawing many plaudits from an enraptured press, the RX-8 has shown that bold design and engineering can find favour with consumers.

What You Getword count: 502

There are certain terms that car manufacturers love to use when pushing their latest wares. Words like extreme, radical, groundbreaking, and distinctive are often used to describe cars that are anything but. We grow immune to this hyperbole, a healthy amount of cynicism protecting us from the worst excesses of the press offices. Every now and then, however, something arrives that genuinely does break the mould. The Mazda RX-8 has certainly lived up to that particular billing. Here is a car that provides even greater impetus to Mazda's ongoing renaissance. Four-door coupes are pretty thin on the ground, the term practically reading like a contradiction, but this one has been carefully thought out. The rear-hinged back doors create a pillarless profile and despite their truncated dimensions, allow easy entry and egress to and from the rear pair of seats. It's an idea that Rolls-Royce have adopted for their Phantom and it works very well. The doors may attract the causal observer but as anybody who knows anything about Mazda's RX series of cars knows, the real Unique Selling Proposition lies under the bonnet in the form of a compact rotary engine. Rather than use a conventional internal combustion engine in which a number of pistons pump up and down in their respective cylinders to provide the motive power, a rotary engine like the one used by Mazda instead adopts a completely different engineering solution. Two triangular rotors spin in ellipsoidal chambers which, as any student engineer will attest, is a very elegant theory. Why? Because constantly spinning a rotor is a far more efficient use of energy than the wasteful, reciprocating motion of a piston accelerating from 0mph at the end of its travel up to around 40mph and then decelerating to 0mph at the other end of the cylinder, all in the space of a hundredth of a second. That's the theory. In fact rotary engines have a reputation for being thirsty, dirty and difficult to maintain. Mazda claimed to have addressed these issues with the RENESIS engine found in the RX-8, the powerplant winning the 2003 Engine Of The Year award. As well as building on the traditional virtues of rotary engines, namely their smooth revving nature, their low weight and their flat, broad spread of torque, Mazda ironed out many of the bugbears. The efficiency of the engine was improved by a fundamental redesign of the way air and fuel are pulled into the combustion chamber and the way that exhaust gases are ported out. Cleanliness was improved as well, with unburnt hydrocarbons being recycled back into the chamber for another torching. As regards durability, Mazda worked hard to exorcise the demon of rotor tip wear using high tech materials and their engineers obviously had a clear understanding of the thermodynamics at work in the engine. The result was an engine that can rev to 9,000rpm without ever feeling strained. It settles to a hum at idle but then just zings straight up to the redline with turbine-like smoothness. 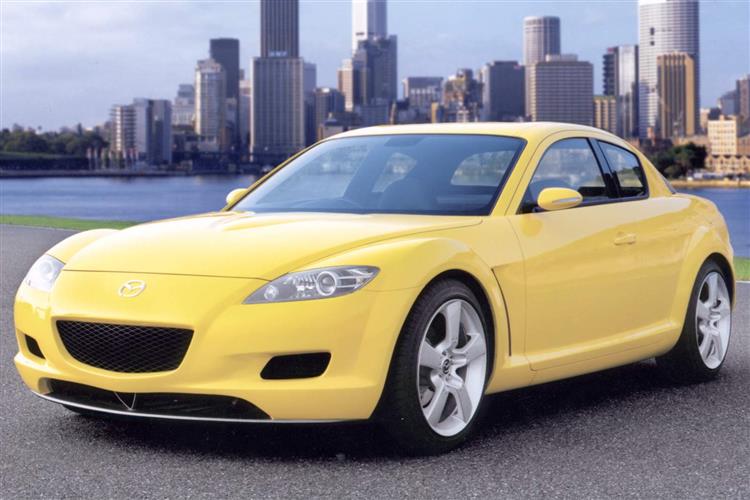