By the end of 2004, Audi's second generation A4 was beginning to struggle a little in the face of mounting competition that included a new BMW 3 Series and a thoroughly revised version of Mercedes' C-class. Audi's response in early 2005 was to thoroughly facelift the car, improve its perceived quality, sharpen the handling and add some new engines. The result was the revised MK2 A4 we look at in detail here. It all worked pretty well too, the result being the creation of a car that many feel to be the most desirable compact executive car money can buy. Mercedes might charge more for its C-Class and BMW might sell more of its 3 Series but in terms of image, the A4 hits the nail on the head these days. Buyers haven't been slow to recognise this and Audi has trebled its sales in the last twelve years, the A4 being the prime mover and shaker in this transformation.

Time does funny things to perception. I had the opportunity to sit in an early Audi A4 last week and wondered what all the fuss was about. Was this the car we really raved about in terms of cabin quality? It was all just plastic. But then so were all of its rivals, only less expensively so. These days customers demand more than mere petrochemicals and the post-'05 A4 models feature splashes of chrome, soft leather and all sorts of 'surprise and delight' features in their cabins. It's become an Audi trademark to offer an interior that puts its rivals to the shame and this generation A4 is no different. While the interior might not deviate from the Ingolstadt script, the exterior of this A4 certainly did. Before this car debuted, A4s were wholly low key things, Audi deciding that discretion was what buyers were after. Soaring sales figures and a few Le Mans wins under their belt changed all that. Audi was no longer a company that felt the need to offer an almost apologetically low-key image. New Audi was an outfit that wanted to make its presence felt a little more forcefully and the post-'05 A4 certainly did that, wearing the family front end, the so-called twin-frame grille, a more aggressive stance and more flamboyant detailing. The range was introduced in early 2005 largely with carry-over engines from the pre-facelifted version A4. It wasn't long however, before new powerplants came on stream. Basically, the main news was the replacement of the old 163bhp 2.5 V6 TDI diesel unit (out-moded by a new 170bhp 2.0 TDI engine) with a 180bhp 2.7 TDI powerplant borrowed from the larger A6. Then there was the introduction of a range-topping 414bhp V8 for the flagship RS4 variants, with the saloon arriving in early 2006 and the Avant estate version six months later. Trim levels included the S line, which replaced the old Sport trim level and which was unveiled in April 2005. There was also a sporty limited edition 2.0T FSI DTM model with stiffer suspension and big alloy wheels. With these tweaks in place, by 2006, A4 buyers chose between five diesel units: the older 1.9-litre 115bhp TDI, then two 2.0-litre TDI powerplants developing 140 and 170bhp respectively. At the top of the range, there were two V6 TDI units, that 2.7-litre 180bhp powerplant and a 233bhp 3.0-litre V6 TDI unit also borrowed from the larger A6. Petrol power started at around £20,000 with a 130bhp 2.0-litre unit, but most buyers thought it well worth finding an extra £1,300 and upgrading themselves to the 163bhp 1.8T variant. Or even better, scraping together around £23,000 or so to get themselves behind the wheel of one of the world's best engines, the 200bhp 2.0T FSI. This powerplant is so good that many questioned the need to spend any more on the 256bhp 3.2 FSI, the desirable 344bhp V8 S4 quattro or even the 414bhp RS4. The Cabriolet models got the post-'05 twin-frame front grille and other tweaks in March 2005, with the racy RS4 cabriolet arriving in dealers in December 2006. In 2008 an all-new A4 replaced this model.

The post-'05 facelift changed the basic look of this car - always a gamble. Looking at sales figures since, however, it seems to be a gamble that has paid off richly. The A4 now outsells the Mercedes C Class and the sales projections indicate that it will only be a couple of years before it knocks BMW off the tops pot. Where the A4 knocks its BMW 3 Series rival into next week is in interior design and perception of quality. Put simply, the A4 moved the game on a good few notches. Older A4 were held as the class best in terms of build integrity and ergonomics but some felt that from a design perspective, the acres of black plastics were starting to look a little too nineties. The post-'05 model rectified this, taking many of the design cues from the A8, including more imaginative use of contrasting coloured trims, metal brightwork and electronic functionality. Though improvements in the car's crash structures optimised space, room in the back of this A4 still wasn't anything like class leading but the Avant estate versions can carry a useful sized load. Whole life ownership costs are one of the reasons many buyers are drawn to the A4. Couple that with cleaner and more fuel efficient engines that make even more sense to company car users and this Audi will continue to attract British buyers in large numbers on the used market. The Cabriolet model is worth looking out for as it offers the traditional A4 virtues with a very rigid chassis. 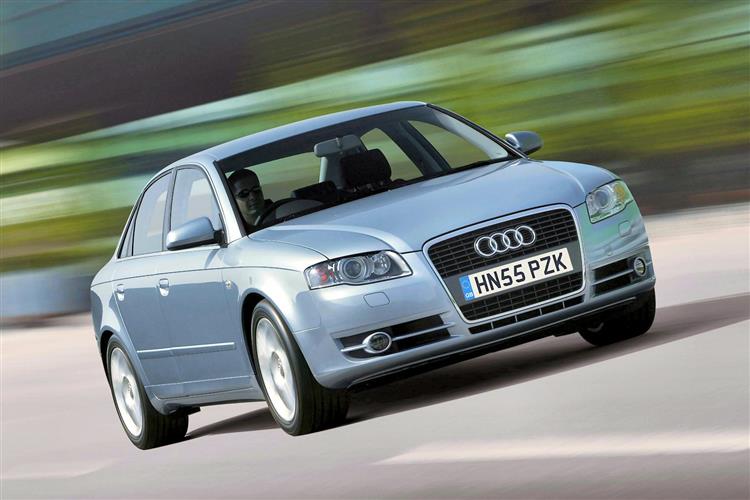