The Porsche Boxster is a mightily impressive sports car. Marketing staff at Porsche GB have even been heard to mutter that it's too good, poaching more profitable sales from the legendary 911 range. After the demise of the 968 series of 'entry-level' Porsches, keen drivers cried out for a model that gave them classic Porsche design, technology and ability at relatively affordable prices. The Boxster provided that in spades. Whilst the initial model was no ball of fire, progressive incarnations have just got faster and faster. Whatever model chosen, the Boxster makes a great used buy. Due to its sound build quality and reliability, the baby Porsche is a largely trouble-free used proposition. Just don't expect those qualities and a Porsche badge to come cheap.

The Porsche Boxster arrived a year after its predecessor, the 968 series of cars, was axed. During this lean time, Porsche had to rely solely on the 911 and needed something special to reignite sales interest. The Boxster hit that particular bullseye. Developed from a show car which wowed the crowds at the 1993 Detroit Motor Show, the Boxster initially disappointed due to the watering down of many of the bold ideas displayed in the show car. Its on-paper performance figures didn't appear promising either, being significantly slower than the previous 968. It did have a classic Porsche flat-six engine, even if it was water-cooled and located in the middle of the car instead of slung out past the rear axle, and those who drove the Boxster were instantly converted. The most significant change to the Boxster range came in October 1999, when the base model's engine capacity was raised from 2.5-litres to 2.7-litres and a new S model was launched. This had a 3.2-litre engine right behind the driver and developed an impressive 252bhp. Any gripes about the Boxster's straight-line speed were banished for good. Tiptronic transmission, basically a manually controlled automatic gearbox with steering-wheel mounted shift buttons, was available on all models. A replacement Boxster was unveiled in the Autumn of 2004.

The Boxster is an astonishingly capable car. Traditional Porsche design cues are everywhere, belying the car's position in the range. There's the slab-like dashboard, the breathy wheeze of the flat-six engine behind you and Porsche's Weissach Crest staring at you from the centre of the steering wheel. The detailing on all models is good, but interior fit and finish was much improved when the 2.7-litre and S models were launched. The plastics quality on the 2.5-litre cars is notably inferior. Having said that, whichever Boxster model you choose, it's a car that makes you feel a million dollars, especially with the hood down and the engine at full chat. The hood mechanism is almost worth the price of admission by itself. Pressing a single button will electrically raise the rear deck, and unfold the hood until it tautens and can then be latched onto the windscreen header rail. In all it takes just 12 seconds and although rivals such as the Mercedes SLK have taken this trick and refined it still further, the Boxster's hood still draws admiring glances. And this, for many, is what the Porsche is all about. It's a car to be seen in, to parade about town whilst flaunting effortless good taste. For this set, the Porsche is surprisingly practical. The front and rear boots can actually swallow a surprising amount of Prada and Hermes bags, and the Tiptronic cars make town driving painless. This sort of car, having lived its life gently perambulating suburban high streets makes the best used buy. Often, however, they get treated far harder. 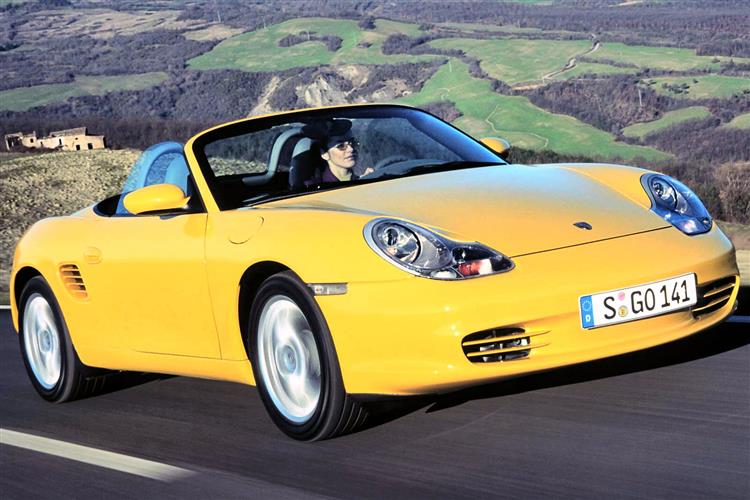