BIG ON QUALITY (some text hidden)

How often have we heard the phrase "quality not quantity"? Think about it for a bit and consider how that maxim sits with modern car buyers, demanding customers who want it all and want it now. Audi realised that small helpings of beautifully crafted engineering weren't enough to cut it in a tough market and with the A6 embarked on a different philosophy, namely supersize it but make it better built than ever. The 2004 A6 also came with an added dose of attitude. Whereas it took some time for many buyers to become comfortable with the styling of the BMW 5 Series, the A6 was an instant hit. The combination of big car and big presence had been tried before but never with this depth of quality control to back it up. Used examples are now starting to filter onto the market and make very interesting buys.

When it debuted in 1997, the A6 represented a viable alternative to BMW and Mercedes, the curvaceous forms of its styling suddenly making the establishment look a little old hat. But whereas the E Class and the 5 Series developed beyond recognition in the intervening years, the A6 was updated with only the most modest revisions. Evolution not taking Audi where it wanted to be, it opted for revolution and the latest A6, whilst still retaining many signature styling cues, is a class apart from its predecessor. The key styling feature is that prominent grille or, as Audi prefer to call it, the 'single frame'. Look beyond that and you'll notice the curvaceous flanks, topped and tailed by a sharp longitudinal crease line that forms a definite hip and the rising edge in the door sills that creates a great deal of tension and shadow in the A6's profile. The Ingolstadt company claims the world's tightest shut lines and the panel fit around the door is indeed superb, the 2.5mm apertures between the doors and body panels being astonishingly uniform. Gone are the days when the 'pound coin test' would separate the best from the rest when it comes to panel fit. The range was fleshed out with an excellent entry-level 2.0-litre FSI turbo charged petrol engine (as seen in the Golf GTI) and also a revised 2.7-litre turbo diesel. The Avant estate version followed in Spring 2005 and in spring 2006, the 430bhp V10 S6 became available to order. The 4.2-litre V8 was upgraded to use FSI direct injection technology at around the same time and the 2.8-litre V6 FSI arrived a few months later. The mighty RS6 arrived early in 2008 packing a twin-turbo V10 engine and the entire A6 range was facelifted towards the end of that year.

There's a good deal of A8 in the A6's genetics. It too makes extensive use of aluminium to help trim the weight. The bonnet, front bumper, bootlid and firewall are all constructed in aluminium, although such are the volumes that Audi predicted this car would sell in that an all-aluminium construction like the A8 would have proved too difficult to productionise. Despite being significantly larger than the previous generation A6, the weight of the MK3 2.4-litre saloon swelled by a mere 45kg to 1525kg. The design isn't all show however. The neat integrated tail spoiler helps cut rear lift to a mere 19kg at 155mph. This represents a quarter of the outgoing model's lift and the drag coefficient has been cut too from 0.31 to a slippery 0.28. Despite its slinky profile, the tale of the tape doesn't lie and the A6 was launched as comfortably the biggest car in its class, dwarfing rivals such as the Jaguar S-TYPE and the Lexus GS series. The overall length swelled to 4916mm, up a whole 121mm over the outgoing car. The boot is a whopping 546 litres in all saloon models (or there's the Avant estate option) which is not only bigger than the equivalent BMW 5 Series and Mercedes E-Class but also manages to put this car's big brother, the A8, in the shade. The MK3 A6 Avant features what has to be the most meticulously designed load bay in estate car history with all manner of hooks, eyes, hidden compartments, storage nets and so on. An optional reversible mat features velour carpeting on one side and a wipe-clean rubberised finish on the other, additionally incorporating a pull-out protective sheet that extends over the bumper, preventing damage to the car's paintwork. A detachable ski or snowboard bag was developed for this derivative, as was an internal cycle rack system - we could go on but you probably get the idea already. 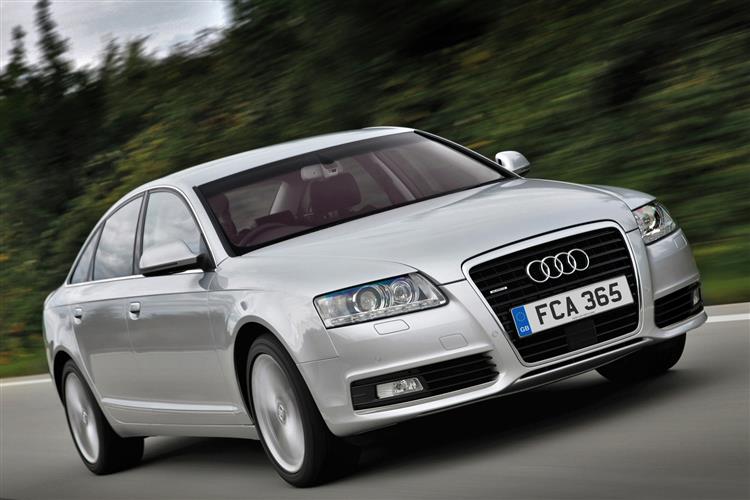