When we speak about hot hatchbacks, we're talking about ordinary cars modified to go extraordinarily quickly. We're talking about affordable performance and aggressive looks. Vauxhall's Corsa VXR delivers in all these areas but should interested buyers bother to seek them out on the used car market?

Vauxhall used to badge its performance cars GSi. There were some quick models with SRi stamped on the tailgate though. Oh yes, and GTE always spelt big fun too while many SXi models came with a mild dynamic flavour. Beyond that, there have been GLS, GLi, CDX and CDi Vauxhall variants to contend with that weren't overly sporty. Some cars were even badged 'Sport'. It was all as clear as a bucket of snow. What Vauxhall needed was a recognisable performance brand that customers could get a solid handle on. Inevitably, it settled on another three-letter combo - VXR. Rather than sticking with the 'Scrabble bag' method of determining nomenclature, Vauxhall chose to develop VXR as its flagship sporting brand much as Volkswagen has GTI and Honda has Type-R. It forged a perceptual link with its VX Racing motorsport team in the process, underlining the connection between the Vauxhalls people can buy and the ones they saw on the track. First off the production line was the VXR version of the VX220 sportscar. Then came the Monaro VXR, a muscular V8 coupe, and the Astra VXR of 2005. All of these cars offered big power, rapid performance and bundles of fun for the money but were criticised for a certain lack of finesse. The Corsa VXR that arrived in 2007 wasn't lacking in brute force but it was the first VXR Vauxhall that could live with its major rivals in terms of the way it put that power to use. The Corsa VXR is the hot version of the Corsa supermini that launched in 2006 to critical acclaim. Cabin quality, interior space and ride comfort were key strengths of the basic car but the VXR model took it off in a far more dynamic direction with a comprehensive set of performance and styling modifications. The options available to buyers were limited with the car coming in three-door guise with a 1.6-litre turbocharged engine, a six-speed manual gearbox and a single trim level. More choice was provided by 888 special edition VX Racing Edition models that were made available early in 2009 with 500 VXR Arctic cars turning up a at dealerships around the same period.

VXR products don't tend to be shrinking violets and true to form, there's very little that's low key about the Corsa VXR. The bodywork is riddled with scoops and vents with much of the styling embellishments taking triangular form. There's triangular mesh in the grille with its body-coloured V-bar and under bumper, while each of the fog lights is housed at the end of its own vaguely triangular chrome funnel. The fetching wing mirrors have a triangle hole beneath and at the back of the car, there's a triangular exhaust finisher as a final retort to those left floundering in the VXR's wake. The attention to detail, both inside and out, is impressive and Vauxhall certainly pulled out the stops to differentiate the VXR from humbler Corsa offerings. The cabin is dominated by the specially-designed shell-backed Recaro seats which offer outstanding support and comfort. The flat-bottomed steering wheel is another upmarket feature that will set the enthusiast's heart aflutter and you have the general build quality of the standard Corsa which is as good as any of its direct rivals. Standard equipment includes ESP stability control, air-conditioning, remote central locking, electric front windows and door mirrors, a CD stereo and 17" alloy wheels. Vauxhall offered massive 18" alloy wheels as an option, the biggest ever offered on a supermini at the time, and they really add something to the exterior with little detrimental effect to the ride quality. Once you've got your hands on one, running costs for a Corsa VXR should be reasonable for a car in this class with a combined average of 35.8mpg and 190g/km CO2 emissions. 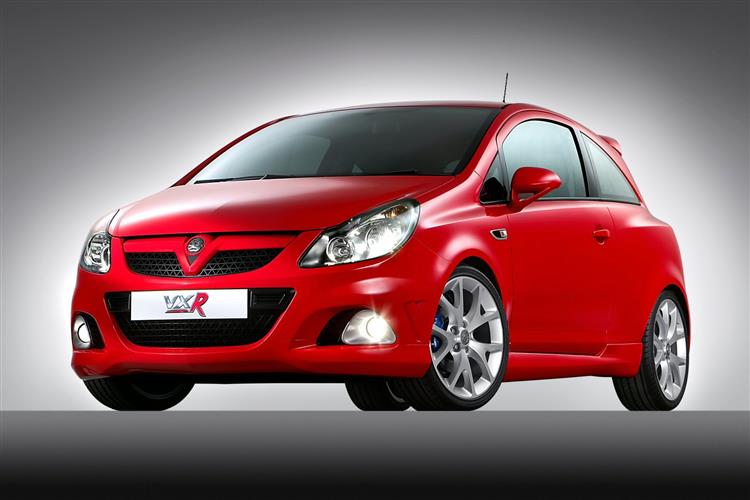