Compact estate cars sound like a bad idea right from the outset. If you're going to buy a load lugger, why buy one that can't lug much of a load? Logic issues notwithstanding, Volvo managed to turn the genre on its head with the V50, a car that made you want to make multiple trips to IKEA just because of its neat good looks, smart detailing and reassuringly 'on message' image. With a range of decent engines, a great chassis and competitive pricing, the V50 - along with its S40 saloon sibling - made small Volvos attractive once more. A used example is well worth tracking down.

How you perceive Volvo's V50 very much depends on your initial standpoint. Come at the car with the perspective that this is a condensed version of the Volvo V70 and you'll love it. Hardened cynics will see it as just an expensive rehash on a Ford Focus chassis and will consider the V50 overpriced. I'd have to say the cynics would be wrong as the Focus chassis is one of the best in the business and beyond the basic nuts and bolts, there's not a lot of common ground between, say, a Focus Estate and a Volvo V50. The range was introduced here in Spring 2004 and was quickly fleshed out with larger capacity and diesel powerplants. Above the entry-level petrol 1.8, these included the 2.4i and the 2.5 T5 for petrol buyers, plus a 136bhp 2.0-litre diesel. A 180bhp 2.4-litre D5 diesel wasn't to follow until early 2006 followed by a 145bhp 2.0-litre petrol unit. Unlike the saloon S40 model, no 1.6-litre petrol or diesel engine option was offered until 2007. However, the V50 was first to get the more powerful D5 diesel unit and you can get the performance T5 version with all-wheel drive. A range reshuffle at the start of 2007 saw prices cut across the V50 line-up. Trim levels were also tweaked with the SE gaining a powered driver's seat and an upgraded stereo. A little later that same year, a wide-reaching facelift was carried out with a reprofiled grille featuring a larger Volvo badge and tweaks to the interior. Flexifuel models were also introduced, capable of running on normal unleaded or renewable E85 Bioethanol. The R-Design Sport and R-Design SE Sport models were introduced towards the end of 2007 with more extrovert body-styling kits and sporty interior trim upgrades. They gave the S40 a useful dose of extra attitude. For the 2011 model year, Volvo introduced its 2.0-litre five-cylinder diesel engine to the V50 and rebadged all the diesel options D2, D3 and D4 according to their power outputs. The trim levels were also changed with ES taking over at the entry-level model.

What You Getword count: 470

The V50 rides on the same basic chassis set up as the Ford Focus C-MAX, the Mazda3 and the Volvo XC50 compact 4x4, as well as Land Rover's latest sub-Freelander baby. That's not to say the V50 is simply a rebodied Focus. Although the underbody, subframes and suspension layouts are the same on all these models, there's vast scope for tuning of individual aspects, so all will drive differently. Volvo haven't skimped when it comes to safety, and they claim that the V50 is as good to crash in as the flagship S80 saloon. Making a small car as safe as a big 'un takes some doing and it's only when you look at some of the finer points of how Volvo have achieved this that you realise quite what this commitment means. It involves casting the turbo housing as one with the exhaust manifold so that the engine is more compact when mounted transversely, giving more space for crush zones. It means developing the Intelligent Driver Information System which monitors how hard you're using the throttle, brakes and steering and will hold incoming telephone calls or satellite navigation instructions until things have calmed down so as not to distract you in the middle of a manoeuvre. It means using four different grades of high tensile steel for crash protection. Would the V50 look a little sexier with BMW-style flame-surfaced concave flanks? Probably. But side impact protection involves having as much deformation space as possible which is why it's slab-sided to keep its occupants looking good. All too often, we hear about innovations in car design and what we really get is moderately incremental changes. In contrast, the V50, like the S40 model that spawned it, featured a number of styling touches which we'd genuinely never seen before. The exterior won't get too many pulses racing, effectively resembling a shrunken version of the larger S60 saloon, but the cabin is a delight. Volvo interiors are traditionally odd things. Although they work supremely well, they are often clunkily designed with scant regard for the sort of slickness that separates them from rivals. Little of the design flair we usually associate with the Scandinavians has traditionally seemed to translate into their cars. Here, it's different. The 'spaceball' gear selector in the S60 showed that Volvo could come up with some neat ideas and the V50 takes the spaceball and runs with it. The key design feature is a centre console that's a softly contoured moulding featuring supremely easy to use controls and fresh air behind it. Original buyers could specify wood, aluminium, plastic or semi-transparent plastic finishes and everybody who gets in will notice the resulting choice. Overall, the V50's cabin still kind of feels like it's just rolled off a motor show stand. Not what you'd expect from a Volvo estate. 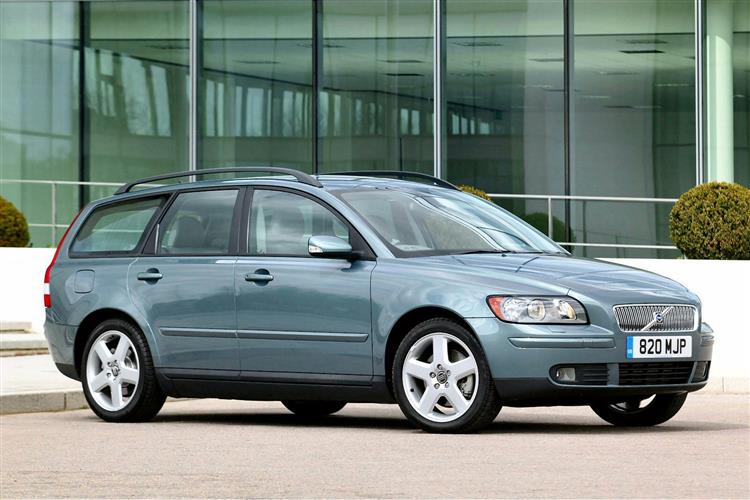