Although Peugeot's 407 coupe and saloon may well have a tough time matching up to the two and four door versions of the much-loved 406, the SW estate version looks to have a much better chance of establishing itself as a favourite in its own right. Long, low and hugely imposing, the SW is a real piece of automotive sculpture. With some serious carrying capacity, a great ride and more style than any other medium-range estate, the 407 SW makes a very interesting buy from new. Used buyers are only just starting to get a purchase on this intriguing model.

The Peugeot 407 SW estate was launched in June 2004, a few months after the four-door saloon paved its way. By now, the critics had run out of barbs to describe its unconventional front end, but the plain fact was that the SW was a better proportioned, more elegant car than the saloon and, whisper it, even the 407 Coupe. What made the SW such a worthy entrant was that it married the style and sleek profile of a sportshatch style model with the carrying capacity of a proper old workhorse. In early 2006, Peugeot added standard SmartNav satellite navigation to the mix, making the 407 SW one of the best choices for the business user who couldn't afford to be late for an appointment. In the Spring of 2006, the range was enhanced with the arrival of the 2.7-litre HDi engine which was developed in conjunction with Ford. A Sport trim level was also introduced at the same time and all models received chromed grilles. A more important development came in the summer of 2006 with the arrival of the 170bhp 2.2-litre HDi diesel to sit below the 2.7 unit. The Sport XS model was launched early in 2007 with various styling enhancements and half-leather upholstery. It was available exclusively with the 2.2-litre HDi 170 engine.

Love it or hate it, you can't have helped but notice the Peugeot 407 saloon. It's a car that looks utterly stunning from some angles and decidedly odd from others. Much of this is due to the perceived imbalance between the long front end and the abbreviated tail. Imagine getting shot of the notchback rear and instead stretching the 407 back as if it had been squeezed out of a very big tube of toothpaste. That's the effect you get with the SW version (which was priced from new at an £1,100 premium and started from around £16,500) and it looks nothing less than sensational. For those of you accustomed to medium range estates being saloon cars with a hunched fenestration on the back and all the aesthetic elegance of a conservatory mounting your vehicle, it comes as a welcome change. It's not all about good looks either. As Alfa Romeo and Lexus have shown, it's quite easy to build a great looking 'sportshatch'-style estate but end up with little or no space advantage over the saloon it was based on. The 407 SW tacks another 87mm onto the rear overhang and features a tailgate with a very low and practical load height. Lift the fifth door and there's a respectable amount of room, Peugeot's designers concentrating on sheer utility. The load bay is never less than 1,100mm wide and the front passenger seat can fold forwards, allowing items up to 2,700mm to be carried. Two side storage pods in the load bay also allow gear to be stowed well out of harm's way. A solid carpeted cover aids security by keeping what's in the load bay out of sight of prying eyes. The rear seats split in a 66:33 fashion and fold virtually flat to the floor without the tedious necessity to remove the head restraints. Thus equipped, there's a 1,700mm load length. A full five seater, the 407SW features a number of thoughtful features deigned to make the car easy to live with. As touched upon before, the rear loading lip is only 61cm from ground level and shorter drivers will appreciate the strap that dangles from the tailgate. The luggage bay incorporates a soundproof membrane to isolate road and suspension noise and includes four support bars so that heavy suitcases can easily be slid in and out without risking a herniated disc. Options from new included a ski flap, luggage nets and a six CD autochanger and JBL bass box which are mounted adjacent to one of the side luggage bins. 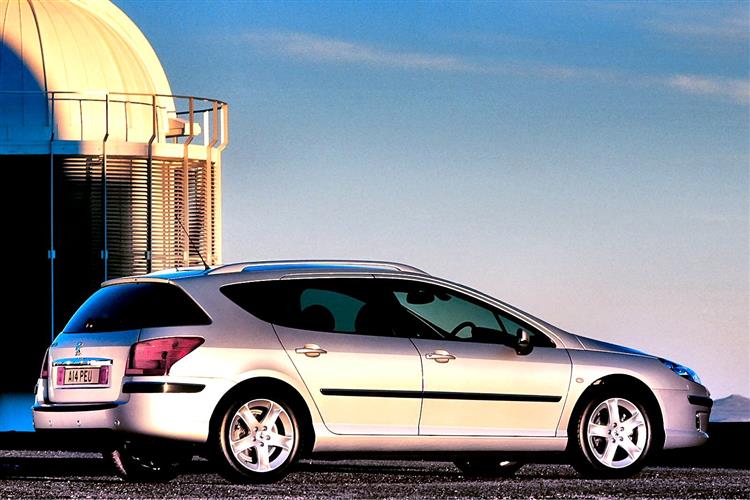