LEAVE IT ALL BEHIND (some text hidden)

The Focus has been a massive family car success story for Ford so it's hardly surprising that the blue oval has looked to apply the Focus formula to as many bodystyles as possible. Three and five-door hatchbacks, saloons, estates, MPVs - we've seen them all and many of us have even bought one or two of them down the years. We've also been treated to the model we feature here, the Focus Coupe-Cabriolet. It's a Ford Focus convertible but is it worth considering as a second-hand option?

Folding metal roofs make sense for a lot of reasons. Any salesperson with an element of savvy about them will point out that these arrangements marry the exhilaration of open-topped motoring with the security and practicality of a fixed-roof car. What they may keep to themselves is that a folding tin-top adds weight and can often result in oddly unresolved styling characterised by a dramatically oversized bottom. The Focus CC has good and bad points and is one of numerous metal roofed convertibles based on family-hatchback cars or similar that were launched at around the same period. Notable alternatives include the 307CC form Peugeot, the Renault Megane CC, Vauxhall's Astra Twin-Top and Volkswagen's Eos. The Focus CC first showed its face in 2006 and it was a familiar one having been lifted directly from the Ford Focus hatch. 1.6 and 2.0-litre petrol engines were available alongside a 2.0-litre TDCi diesel. Trim levels were nice and simple to grasp by Ford standards, the different grades badged CC-1, CC-2 and, you've guessed it, CC-3. There are no two ways about it, the Focus CC has quite a backside on it, even by the big boned standards of other compact folding hard-top models. A facelift at the end of 2007, helped to draw attention away from the hind quarters with a sharper front end based around Ford's Kinetic design themes.

In the early days, most coupe cabriolet models looked rather ungainly, with huge distended rears that would open up like something from a Bond movie and then swallow the hood mechanism whole. The Focus CC is an improvement from the worst of those models but it still doesn't get things spot on at the back. At least it sorts out the secondary issue with early variations on the coupe-cabriolet theme, the lack of space inside. Focus Coupe-Cabriolet has 500-litres of room when the hood is up, although this does drop when the folding roof cartridge is in place. A full four-seater, the car may not be the answer to the family motorist's prayers but it's a lot more practical than its fun-loving agenda may suggest. The two-piece electrically-operated hard-top roof whirrs into life at the touch of a button and takes just 29 seconds, with no catches, latches or levers needing to be manhandled. Once the roof is stowed in the boot, the Focus Coupe-Cabriolet's lines are a good deal more elegant, with a classic rising waistline and a clean rear deck. Inside, the car's dashboard layout follows the style of other Focus models, but with a different colour scheme developed to distinguish it as a flagship. There are three trim levels and the names are fairly self explanatory: CC-1 (only offered with the 1.6-litre engine), CC-2 and CC-3. All feature alloy wheels, an embossed chrome Focus logo at the rear, four-seats with sculptured rear bench, electronically-operated and heated door mirrors with side turn indicators, Thatcham Cat 1 alarm, CD stereo and air-conditioning. With the CC-2 models, you can expect 17in alloy wheels, three-spoke leather steering wheel, Sony MP3 player and Ford's excellent Quickclear windscreen defroster. Find a CC-3 and you'll also get leather seats, cruise control, a Sony six-CD system and automatic lights/wipers/mirror. Safety of course is paramount in a car like this and Ford's new Rollover Protection Device (RPD) plays a vital role in increasing the Coupe-Cabriolet's passive safety performance. In addition to standard front and side airbags, the RPD is designed to help protect passengers in the event of a vehicle rollover. If the system detects an imminent roll, two safety roll-bars "fire" and extend out by up by 20cm to provide a supportive safety strut along with the ultra-strong windscreen pillars to protect the car's occupants. ESP stability control is also standard. 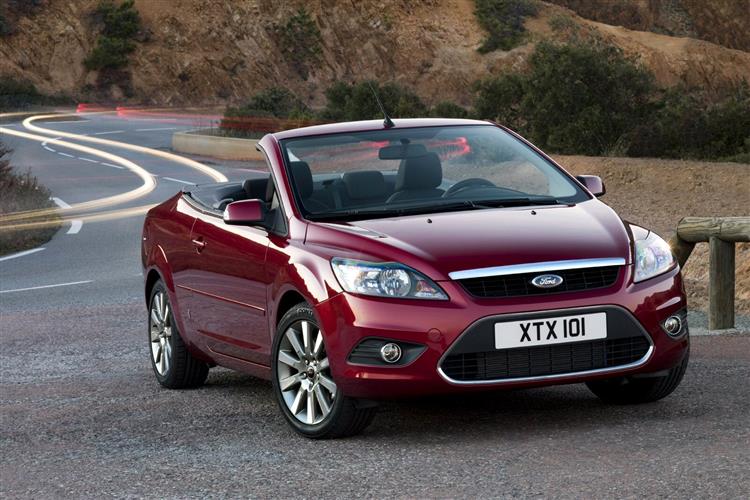