FOX IN THE BOX (some text hidden)

Such are the vagaries of the global car industry that a manufacturer can seem on top of the world at one moment and on its uppers the next. After the no-expense spared approach to city car manufacture that was the Lupo, Volkswagen performed a massive body swerve and brought us something very different in the not quite so pert shape of the Fox. A 'world car' built in Brazil, the Fox was as basic as the Lupo was chi-chi. It benefited from the demise of the SEAT Arosa and helped counteract Volkswagen's more aspirational leanings such as the Phaeton and the Touareg. As a used buy, it's now starting to gain a bit of momentum.

The Volkswagen Group have proven past masters at building affordable, appealing citycars, with vehicles like the SEAT Arosa a case in point. The problems arose when leveraging the brands in the hierarchy. Skoda and SEAT sit at the affordable end. Next up comes Volkswagen and 'the people's car' appeals to a rather more well-heeled set of people than Skodas and SEATs. That's the theory at least and while it's relatively easy to pull off this theory when dealing with mid-priced models like Golfs and Passats, the Volkswagen badge runs out of equity at the top end - witness slow sales of the Phaeton - and increasingly found itself scuppered at the lower end by its SEAT and Skoda siblings. In short it was being squeezed - hence the struggle experienced by Volkswagen's Lupo, a rather pricey re-badged SEAT Arosa that represented VW in the citycar sector between 1999 and 2006. Volkswagen needed a car cheaper than the Lupo but which retained Volkswagen brand attributes. The Fox aimed to do just that. Taking advantage of low labour costs in Brazil, Volkswagen found itself able in 2006 to turn these cars out and ship them to Europe very cheaply. By this time, with the Lupo and the SEAT Arosa long since ditched, the Fox had become the only true city car in the Volkswagen Group portfolio - which also helped sales. The Fox landed in dealers in February 2006 and got off to a slow start, its thunder stolen by the Citroen C1/Toyota Aygo/Peugeot 107 trio. Since then, Volkswagen has attempted to stimulate interest with eyecatching deals but the Fox hasn't been the success it was hoping for. All of which spells bargains for used buyers.

What You Getword count: 359

After the Lupo's silver-rimmed Italianate twin instrument dials featuring Allen bolts and soothing blue backlighting at night, the Fox comes as something of a shock. It's by no means as sophisticated as the latest crop of citycars - the Citroen C1, the Peugeot 107 and the Toyota Aygo triplets spring to mind - but it does what an inexpensive Volkswagen should do. It's versatile, well built and hugely spacious. The tape measure even shows that the interior is bigger in most key dimensions than the Polo, a car that campaigns in a class above. Volkswagen have even managed to endow the rear seats with a certain degree of MPV-style flexibility. They fold 50/50 and an option is the capability to slide 15cm back and forth, allowing owners to choose between Golf class rear legroom or genuinely useable luggage space for a family of four. That's a rarity in this class of cars and acts as a significant plus point for family buyers. The rear seat even folds and flips up, revealing a very useful flat loading area. After all, many buyers are now expecting more of so-called 'citycars'. A true citycar is a somewhat limiting vehicle, often purchased as a second or third car. The latest crop are a whole lot more versatile and can shrug off longer journeys with insouciant ease. Count the Fox amongst these. There are two trim levels - standard and Urban, which includes electric front windows, body coloured bumpers and door mirrors and remote central locking. All versions get twin airbags and are only available in a three-seater bodystyle. Access to the rear is good, even for taller passengers. The fascia is cleanly styled with a four-spoke steering wheel and a functional instrument binnacle. This houses a large speedometer with an inset digital display and ancillary warning lights along with dials grouped around the outside. The centre console is of obvious Volkswagen provenance and looks a little outdated compared to some of the slickly designed offerings rivals have come up with. Volkswagen would doubtless claim the Fox offers everything you need in a citycar and nothing you don't, but fashionistas will probably look elsewhere. 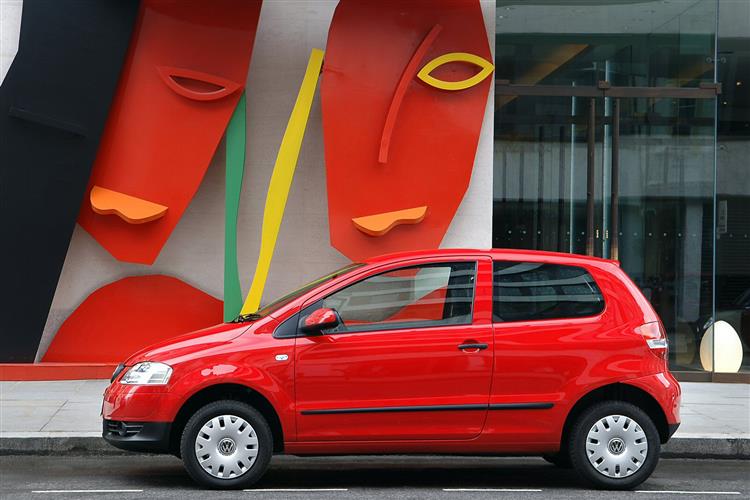