NICE AND CC (some text hidden)

Let's imagine that you're in the market for a family saloon car. You want something roomy, reliable, sturdily built and with a quality feel. Volkswagen's Passat ticked all these boxes in its sixth generation guise, just like the five generations before it did, but like those cars, the MKVI Passat was about as exciting as a twelve volume company car tax handbook. If you're after even a smidgeon of flair to go with its other virtues, this car tends to be found wanting. There is an answer though and it's called the Passat CC.

You might hear the Passat CC described as 'the car that the sixth generation Passat always should have been'. There might well be something in that. This generation of Volkswagen's family saloon stalwart was first launched in 2005 and although it upped the stakes in terms of perceived quality, technology and efficiency, it still didn't offer the family buyer a whole lot of visual excitement. This was against the backdrop of a medium range family car market under pressure. Fleet customers were deserting their usual Mondeos, Vectras and Passats in favour of compact executive models from the likes of BMW and Audi, while private buyers were having their heads turned by the numerous compact 4x4s and MPVs becoming available for similar money. The Passat, despite its strengths, struggled to attract much attention but in 2008 Volkswagen came up with the Passat CC. Inspiration for the CC or 'Comfort Coupe' (no convertible roofs here) may well have been taken from the Mercedes-Benz CLS, a car that had added swooping coupe-like lines to the Mercedes E-Class saloon platform and captured the imagination of executive car customers. The Passat CC did a similar thing but in a lower strata of the market. Still packing four doors and a conventional boot like the Passat saloon, the Passat CC looks longer, lower and wider - largely because it is. The dimensions aren't dramatically different but the curvy roofline and sleeker profile just make the car a more pleasant thing to look at. In order to avoid completely crippling sales of the saloon version, the Passat CC was only offered with a limited range of engines and trim levels at prices that were typically £1,000 higher from new. The CC was also a strict four-seater with a console splitting the cabin down the middle and dividing the rear bench into two separate chairs. That changed in 2010 when Volkswagen fitted a conventional three-seat rear bench to the car and boosted its practicality. All models got satellite navigation at the same time.

The design of the Passat CC is fascinating. Despite almost every external body panel being different to that of the saloon model, most people won't realise that this is a different car. It takes the two cars sitting back to back to really establish what Volkswagen did with the CC. The unique steel body is 31mm longer than the saloon's, that difference being made up entirely by front and rear overhang increases. You might think that this may well offer a bonus in terms of luggage space but the sloping boot deck actually reduces capacity by 40 litres. Undoubtedly a tidy piece of styling work, the Passat CC still isn't extrovert by any stretch of the imagination. Its lines are elegant and clean without providing too much by way of real drama. Still, it's positively adventurous by Volkswagen's rather conservative standards and a more desirable proposition than the saloon as a result. The cabin is noticeably more upmarket than the saloon's, with higher quality materials used and additional equipment. The front seats are very spacious with plenty of headroom but in the rear, there's the twin problems of reduced headroom and only two seats on the early cars. The boot is quite large but its long, flat shape will also limit practicality. The two trim levels are known as standard CC and GT. Even standard models boast sports suspension, 17" 'Phoenix' alloy wheels, 2Zone Climatronic air conditioning, a touchscreen CD stereo system with six-disc autochanger, six-way electrically adjustable sports seats, a multifunction leather steering wheel, six airbags and ESP. The GT adds 18" 'Interlagos' alloy wheels, 'silversprint' upholstery, tinted windows and front foglights as well as Adaptive Chassis Control (ACC). With three settings - comfort, normal and sport - ACC acts not only on the damper units to firm up or soften the ride but also changes the characteristics of the electro-mechanical steering system to suit a more comfort- or sport-orientated drive. 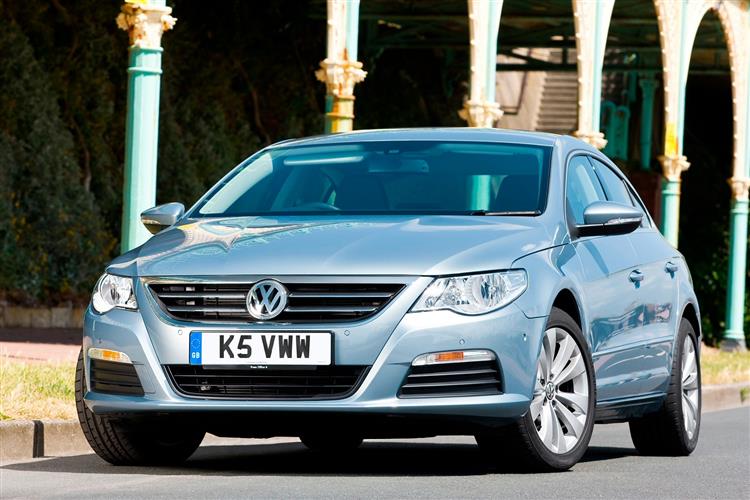