PARTNER IN GRIME (some text hidden)

If Land Rover built a two-seater sports car would you buy it? The brand has never made one before so there'd have to be some suspicion that it had ventured too far from its comfort zone. Suspicion in the car market is not a good thing, not in a sector that's packed with models from brands that buyers have come to trust. Don't hold your breath for a Land Rover roadster but many of the issues that such a car would face were confronted by Peugeot when it launched its 4007 SUV. The French marque had no history with 4x4s and although that hadn't held other manufacturers back, it must have been a concern. Peugeot neatly ducked the issue and enlisted SUV experts Mitsubishi to help.

Mitsubishi, Citroen and Peugeot joined forces to produce this car. The French contingent brought their diesel engine technology and European distribution networks to the party and Mitsubishi contributed its extensive SUV know-how. It seemed like a match made in heaven for Peugeot which badly needed a presence in the burgeoning compact 4x4 market sector circa 2007. One hiccup was the simultaneous arrival on the market of alternatively badged versions of what amounted to the same compact 4x4. Mitsubishi's Outlander, Citroen's C-Crosser and the 4007 may have been styled and badged differently but they were obviously cut from the same cloth. All were well received but Mitsubishi probably did least well from the relationship in the UK because it priced the Outlander at higher levels that the Citroen and Peugeot rivals, hoping to capitalise on its reputation in the 4x4 market. Citroen and Mitsubishi toyed with a lacklustre 2.4-litre petrol engine option in their cars and Mitsubishi with a 2.0-litre Volkswagen diesel but Peugeot only offered the 4007 with the best of the available engines, the 2.2-litre HDi found in numerous other Peugeot and Citroen products. The trim level range was just as straightforward with an entry-level SE version or a GT derivative with a more upmarket flavour.

Given the need to stand out, not only from its design stablemates but also in a marketplace clogged with compact 4x4s, it's not surprising that Peugeot's stylists at the company's Velizy studios insisted on a bold look for this car. Certainly, it has a front end you'd see coming from the white cliffs of Dover without having to put 20p in the telescope. There's no mistaking, in other words, that the 4007 has presence and it's not a car you'll overlook in a sea of lookalike 4x4s in the Waitrose car park. Peugeot's penchant for functionality and innovation is clearly visible in the 4007, with its flexible 5+2 seating configuration. For ease of use when exiting the third row seats, or when reconfiguring the boot layout, the second row seats can be electronically folded forwards using the buttons located internally next to the rear wheel arches. The two occasional use seats in the rear can be simply folded away under the floor, while the second row of seating also slides and reclines for greater comfort. The 4007 offers plenty of stowage space throughout, with over 20 individual storage compartments. When all five rear seats are folded away to provide a flat floor, a vast load space of 1,686 litres becomes available, while the boot capacity is 510 litres when the second row seats are in use. To help loading items into the huge boot space, there's a split two-piece tailgate. Folded down, the lower section drops the sill by 64mm allowing heavy goods to be easily loaded, while doubling as a handy bench capable of supporting up to 200kg. And equipment levels? Well, as well as the electronic 'on-demand' four-wheel drive system and the usual ABS and ESP set-ups, you can expect to find roof bars, automatic air conditioning with climate control, pollen and dust filters, six airbags (front, side, and curtain), an ultrasonic alarm and remote control central locking with deadlocks, alloy wheels, a trip computer, front fog lights and a radio/ CD player with MP3 compatibility. 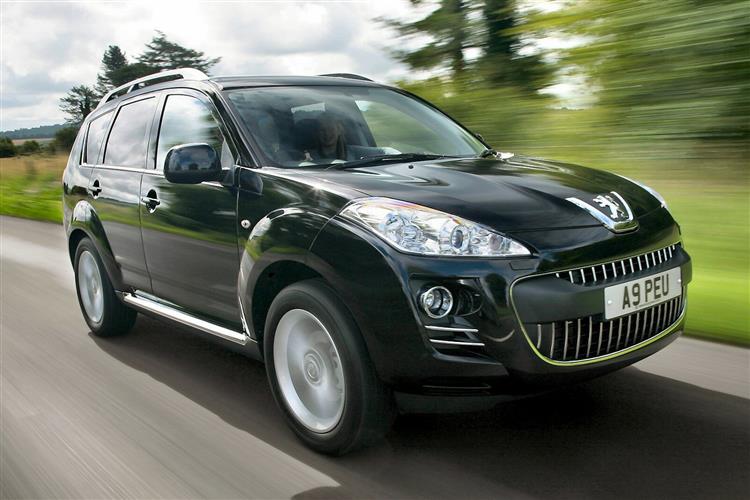