It's often the case that as a family grows, more and more is asked of the family car but less and less cash is available to buy that vehicle. It's a nasty feedback loop to get entangled in. Before you know it, you're in an aging city car overflowing with truculent children wondering where it all went wrong. It's as a preventative measure to just this type of quandary that the Kia Sedona rose to prominence. In offering a seven-seat MPV at a bargain basement price, Kia didn't do anything particularly groundbreaking. The genius was in ensuring that the product was actually rather good.

The original Kia Sedona first hit the streets in 1999 but that car was replaced in 2006 by the model we're looking at here. This second generation Sedona was tasked with building on the success of its predecessor which had turned out to be something of a surprise hit in critical and commercial terms. Sensibly, this car didn't deviate too far from the magic formula with a large, versatile interior and not too much by way of complexity that might bump up the price. The engines were a 2.7-litre V6 petrol with 182bhp that served as an entry-point to the line-up and a more cost-effective 2.9-litre four-cylinder diesel with the same power output but a lot more torque and lower running costs. The trim levels ran from GS to LS and TS, with the petrol engine only available in the entry-level specification. The diesel unit could also be specified with an automatic gearbox to make life that little bit easier.

If you want an MPV with the clever flippy spinny seats that disappear into the floor as if conjured away by Paul Daniels, the Sedona emphatically is not your car. Both the middle and third rows of seats can slide on runners and it's possible to recline them and fold them in half but that's about the extent of the car's party pieces. The seats can come out too, of course, raising the carrying capacity of the Sedona from 364 litres to 1,753 when the rears come out and then 3,440 litres if you convert your Kia into a sexy two-seater. This Sedona is a little shorter and a whole lot prettier than the original model, but repackaging the wheelbase meant that the cabin is significantly bigger. This means that there's more room for people and less sweaty brow when the time comes to parallel park the thing. A 'walk through' section between the front seats means that even very tall passengers can have Club Class style legroom in the second row. The need to carry a lot of bags in the back forces the rearmost seats to be slid to their foremost extent and this limits legroom for adults. Fit and finish is better than you'd have any reasonable right to expect in a car of this price. Even the screwheads that hold the door pulls on are finished beneath hinged plastic covers. I've driven cars four times the Sedona's price where this would never have occurred to the manufacturer. The dash is slightly busy but there's a lot of equipment and a decent double-DIN sized JVC stereo. The twin sliding doors make access to the back easy and also mean that the kids won't be knocking cobs out of other cars in the multi-storey. Front, side and full curtain airbags are standard on all models while the front passenger bag can be deactivated if you have a child seat fitted. ISOFIX anchor points and anti-lock brakes with electronic brakeforce distribution are also present on all versions. 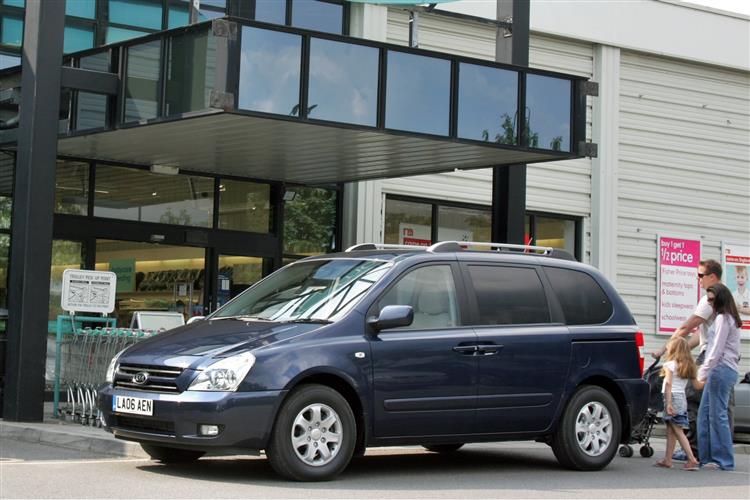