Let's face facts. Precious few of us buy a coupe because of the way it drives. In most cases they drive identically to the saloon model they're often based on. Coupes tend to be bought for something less tangible. Call it a sense of occasion, whatever, but it's that heart warming feeling you get when you see it outside your house and swell with pride that it's yours. Few coupes do a better job of tugging the heart strings than Alfa Romeo's Brera and here we take a look at whether a used example really is worth your while.

As the undisputed star of the Geneva Motor Show in 2002, the Alfa Brera prototype wowed the crowds with a shape that managed to meld classic Alfa Romeo design cues with a bold, futuristic vision of what a post millennial successor to the classic GTV was all about. Nobody really believed the flip-up doors would make production and, for quite some time, Alfa Romeo stonewalled any questions as to whether the Brera would go into series production at all. Fast forward three years to the 2005 Geneva Show and the car that customers would be able to buy was on display. It still attracted huge crowds and remained a very good-looking car but some of the tension and drama of the original had leaked away, replaced by a finished article that worked better from some angles than others. Since it arrived in UK dealers in March 2006, sales have been steady, buyer enthusiasm possibly tempered by magazine reviews disappointed with the car's modest performance and handling. It's still a car that can have pedestrians walking into lamp posts as they watch it drive past. The Brera S special edition of 2008 was a Prodrive tuned model with suspension tweaks to improve handling on UK roads. Two new engines arrived in 2010. The 1750 TBi is a 1.7-litre turbocharged petrol and the 2.0-litre JTDm was a more economical option to supplement the 2.4 JTDm already offered.

From dead ahead, the Brera is something very special with piercing triple circular headlamps that arc down to a simplified version of the show car grille. The bonnet swage lines and underbumper air intakes all serve to give the car a pinched, aggressive look that works superbly. Likewise from the rear, the Brera looks a million dollars. Softer and more rounded than the frontal treatment, the back end features a pair of wedge-shaped tail lamps that integrate into a curvaceous bumper assembly. The arrowhead rear window and quad tailpipes are very deft styling touches. There is also a choice of manual or QTRONIC gearboxes and for buyers seeking a sportier driving experience, the Brera S, which has been developed specifically for UK roads. It's in profile that the changes to the Brera production car can be best appreciated. Sitting on a shorter wheelbase than the 159 saloon, the Brera's overhangs aren't actually any longer than the show car, but appear to be so due to the short wheelbase. The distance between the leading edge of the door and the trailing edge of the front wheelarch is less than half that of the show car, losing the prototype's cartoonishly priapic bonnet length in the process. The roofline is raised as well and a conventional B-pillar has also been quietly inserted. Again, the short doors do little to enhance the elegance of the design. Let's retain some perspective though. This is still one of the best looking cars money can buy. Better looking than Alfa's rather beautiful GT coupe? That's a tough one. In terms of design cohesiveness, I'd say the GT has the edge, especially when specified with a decently sized set of alloys. It may edge the Brera in terms of beauty but the senior partner blows it into the weeds when it comes to visual drama. The Brera's interior is a good deal better in terms of fit and finish than most rivals and it retains the by now almost obligatory Alfa sense of occasion. With plenty of metallic finishes to lift the fascia and driver-oriented instruments, the design makes a nod or two to tradition. How many other cars still retain an oil temperature gauge? The Brera has and it's a welcome touch. There's a voguish starter button and minor controls on the steering wheel. With plenty of adjustment in both the seat and the steering column, even taller drivers will easily find a comfortable driving position. As touched on before, rear seat space isn't stellar but there is a decently-sized boot which, like almost every car manufactured today, appears to have been designed with the main criterion of being able to carry a golf bag. The day I see a manufacturer proudly trumpet the fact that their product can't carry a golf bag is the day that I walk into the dealership and hand over a deposit cheque. 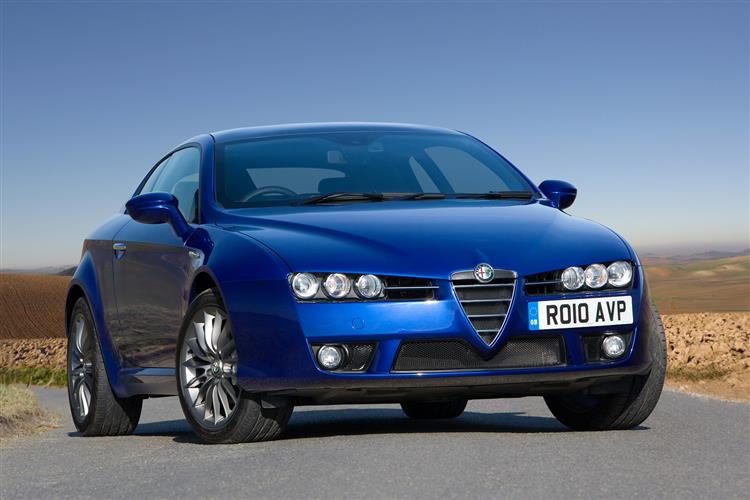