FOUR WHEELS ON MY WAGON (some text hidden)

This might sound like a stuck record but the 159 Sportwagon is an Alfa Romeo that you can countenance buying used. I'm guessing this was probably said about the 156 and the 155 before. Maybe not the 75 but with each subsequent generation of Alfa Romeo models, the Italian manufacturer closes the quality gap on the better cars in its sector. Alfa has pulled its socks up and the results are apparent in improving independent customer satisfaction surveys. Of all the current Alfa models, the 159 rates highest and of all the 159s, the 159 Sportwagon offers the most alluring blend of panache and practicality. It has to be worth a punt.

Alfa had quite some time to iron out the issues with the 156 Sportwagon. On sale from 2000 to 2006, this model started off good and became very well sorted by the time it was replaced. The 159 Sportwagon was not only bigger but a whole lot cleverer as well, arriving in dealerships in April 2006, Alfa Romeo's ill-starred alliance with General Motors stalling the introduction of the 159 a little. Sales have been steady ever since. Alfa introduced a Q-Tronic automatic gearbox for the 159 turbodiesel models in January 2007 and a TI version in July 2007. The entry-level 160bhp 1.9 JTS petrol engine was replaced by a 140bhp 1.8-litre MPI unit in mid-2007 which offered company car drivers better emission and economy figures. In 2009, Alfa introduced the 1750 TBi engine and a 2.0-litre JTDm diesel with 170bhp. The former unit was quite a piece of work with massive torque from low in the rev-range that virtually made the V6 redundant. Trim levels were tweaked to run from Turismo and Turismo Sport to Elegante, Lusso and Ti.

What You Getword count: 393

Practicality. Rarely an Alfa byword, this is one area addressed moderately well in the 159 Sportwagon. I say moderately because, as an 'estate car', its predecessor, the 156 Sportwagon was, and let's not get too delicate here, a joke. With its rear seats in place, it possessed less useable luggage space than the saloon on which it was based. It had other redeeming qualities insofar as it was better looking and, well, better looking but beyond that, it was never the most pragmatic choice. Nor is the 159 Sportwagon, if your blend of practicality involves lugging wardrobes or cubic hectares of garden waste. Where the 159 Sportwagon does move the game forward, albeit moderately, is that despite having the same overall length as the 159 saloon, luggage carrying capacity actually rises. With 445 cubic litres when the rear seats are in place, it's only 15-litres shy of a 3 Series Touring and a whopping 80 litres up on the 156 Sportwagon. At least now it can justify its existence as something other than a pretty face. Whereas many other manufacturers have learned all sorts of tricks from building MPV-style vehicles and have incorporated these into their estate cars, Alfa Romeo remain resiliently old school. The rear seats may be pleasantly light and easy to flip forward but the seat squabs stay fixed, which means that the seat backs won't fold flat. This limits the overall carrying capacity. Some estate cars also feature neat touches like fold out compartment dividers and chromed steel floor rails so that heavy goods can slide in without destroying the carpet: sometimes, you even get pull out loading platforms. You don't get that with the 159 Sportwagon but that's not to say the Alfa is just a show pony. As well as an auxiliary power supply in the luggage bay, there's a light, a pull cover and, best of all, the basic shape of the load area is broad, flat and low with no intrusion from the rear suspension. The actual useable space may well be greater than those with greater quoted capacity in cubic litres. The rear seats split 60/40 and there's a fold down section in the middle that's great for carrying longer items. There's even a small cargo net on one side that's a handy place to store gloves, a torch or other bits and pieces. 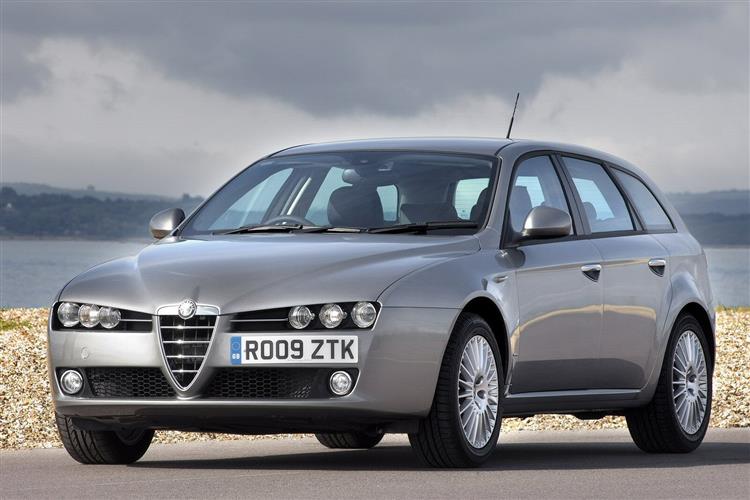