The new-era Ford Fiesta Van looks to be made of the right stuff. Jonathan Crouch reports.

The much improved Ford Fiesta Van gets off to a great start in life in being based on the brand's seventh generation Fiesta supermini. The carrying capacity isn't huge but its driving experience, design and build quality set new standards for the sector. And mild hybrid engine tech now features.

By far and away the simplest route to creating a class leading small car-derived van is to start with a class leading small car. Which in the seventh generation Fiesta is exactly what Ford have. Having done the hard work in creating this supermni, the boys at the Blue Oval weren't above tearing out the back seats to bring us the Fiesta van. This variant competes in the supermini-derived van market where Ford has traditionally taken 25% of sales and goes head to head with the van version of one of the key small models its passenger car sibling must battle. So the Fiesta van follows the same basic recipe as the well established Vauxhall Corsavan in that it sacrifices its rear seats and windows in favour of a flat load bay in which businesses with minimal load carrying requirements can stow their wares.

On the road, if you're familiar with the previous generation Fiesta van, your experience should be that this model has a more solid feel. There's more of an emphasis on petrol power this time round with a choice of two 125PS 1.0T petrol engines - offered both with and without mild hybrid tech and mated to 6-speed manual transmission. With the mid hybrid version of this three cylinder unit, a belt-driven integrated starter/generator (BISG) in place of the standard alternator enables recovery and storage of energy usually lost during braking and coasting to charge a 48-volt lithium-ion air-cooled battery pack. The more powerful BISG also enables the Fiesta Van EcoBoost Hybrid's Auto Start-Stop technology to operate in a wider range of scenarios for even greater fuel savings, including when coasting to a stop below 15mph and even when the vehicle is in gear with the clutch pedal depressed. Variations on the Fiesta Van theme may come and go but before driving this little LCV, there's one thing you almost always know for certain: that it'll be a great steer. This new generation model is 15% stiffer and both front and rear track measurements are wider. The engineers tell us that the chassis now offers 10% more cornering grip, supported by Electronic Torque Vectoring Control, which enhances the driving experience by applying a small amount of braking to inside wheels to assist traction and stability when cornering. Braking distances at 62mph are reduced by more than 8%. There are freshly developed five and six-speed manual gearboxes. And rear disc brakes feature on models with engines developing more than 100PS. 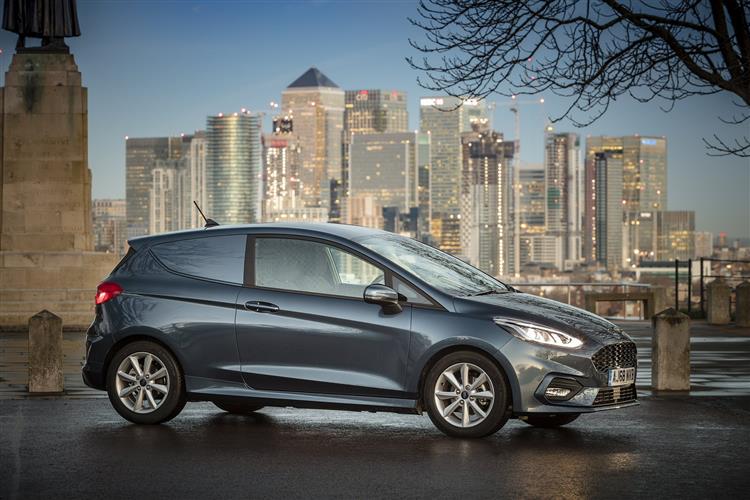