The Peugeot 308 has evolved. This revised smarter second generation model delivers a better executed family hatchback formula that offers a focus on refinement, interior quality and efficiency that puts it right up alongside the Ford and Volkswagen class leaders. It's that good, especially now that the French brand has brought its engine technology up to date. There's a level of self-confidence and, yes, desirability here that we've not seen from Peugeot in a very long time.

What do you look for in an Astra-sized family hatchback? If it's driving excitement, you'll find it in a Ford Focus. If it's sheer value, then you're more likely to be drawn towards cars like Hyundai's i30 or Kia's cee'd. But what if your priorities are a bit more relaxed? You want an expensive feel. An absorbent ride. A laid back demeanour. And a car that makes you feel you're in something much nicer. Perhaps, just perhaps, you want one of these, the revised version of Peugeot's second generation 308. Yes, we're looking at a package of facelift improvements here, but there are some genuinely significant ones, with changes to engines, transmissions and overall running cost efficiency. As before, the car runs on the PSA Group's hi-tech EMP2 ('Efficient Modular Platform 2'), underpinnings that now support a smarter, classier body. The result promises to be a car that family hatch buyers must now take very seriously indeed. Let's check it out.

It's nice to report that the changes made to this 308 are more than skin-deep. There's an all-new 1.5-litre BlueHDi 130 desel engine for example. And if you're able to stretch up to the 2.0-litre BlueHDi 180 diesel powerplant at the top of the range, you'll now find it mated to an all-new 8-speed automatic transmission. The brand says that its 1.2-litre three cylinder PureTech petrol engine has been extensively revised too, in pursuit of extra efficiency. Otherwise, it's as you were. Most will want the 1.6-litre BlueHDi unit, which comes in either 100 or 120bhp guises. There's also a 2.0-litre BlueHDi engine, offered with either 150 or 180bhp. For petrol people, the engine line-up opens with an 82bhp, 1.2-litre three-cylinder PureTech unit, then there's a choice of either 110 or 130bhp versions of this same engine further up the range. Across the line-up, transmissions are fairly standard fare, with five and six-speed manuals or a six-speed torque-converter automatic. If you want something sparkier, there's a choice of the warmed-up GT model or the full-fat GTi hot hatch. The GT variant gets the older petrol 1.6-litre THP unit in 205bhp guise or the 2.0 BlueHDi 180 diesel unit. Go for the GTi and there's a 270bhp version of the 1.6 THP petrol powerplant. Dynamically, the 308 has never really been a car for the hard charger. Instead, it's a family hatchback that's more about refinement and a relaxed gait. The suspension carries no great surprises, with a standard front strut and rear torsion beam arrangement. Peugeot has fitted rear trailing arms that allow greater longitudinal arc in the wheel travel. It sounds esoteric but it makes for a smoother ride when the rear wheels hit ridges or bumps. The electrically-assisted power steering is geared towards ease of use rather than detailed feedback but perhaps that's just as well. It makes the 308 very comfortable around town in the sort of usage it will mostly see. 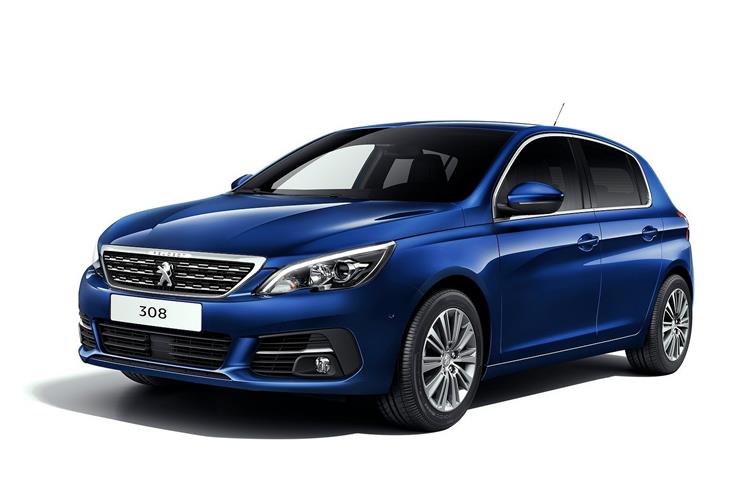