Electric cars are often rather dull. But this one, Ford's Mustang Mach-E, very definitely isn't. The use of that famous name - and the styling cues that go with it - has certainly divided opinion, but it's also given this family-sized sporting SUV a charisma its obvious rival lack. Plus if you go for the larger extended range battery option, you'll get yourself an EV offering what is currently the second-longest all-electric driving range on the market. It all sounds quite promising.

It's difficult to think of a much less environmentally-friendly automotive model line than that of the Ford Mustang. Yet this is the nameplate Ford has chosen for the all-electric cars it will make in the coming era, this being the first of them, the Mustang Mach-E. This sporting SUV model is, we're told, about fast, fun freedom and it aims to please a whole new generation of Mustang owners. The 'Mach' name was apparently inspired by the 'Mach 1' variant of the first generation Mustang and fits with the remit given to the car's creators, Ford's 'Team Edison', who were tasked with creating 'an EV with soul'. Is that what we've got here? You might wonder. After all, this model's supposedly all-new 'GE2' ('Global Electrified 2') platform is actually a revised version of the C2 chassis used in the brand's current Focus and Kuga models. But the product itself couldn't be more different from those conventional cars. As we're about to find out.

We've not yet driven a Mustang Mach-E, but the prospects seem appealing. The Mache-E has three driving modes, rather cringily named 'Whisper', 'Engage' and 'Unbridled'. All versions have a top speed limited to 111mph. And there's a single toggle switch for regenerative braking called 'One-Pedal Mode'. The line-up kicks off with two rear-driven models, one using the standard 76kWh battery, which puts out 254bhp and can take you up to 280 miles. The other uses an 'extended range' 99kWh battery pack, which ups power to 281bhp and increases the car's potential driving distance between charges to 370 miles in rear-driven form. There are also various all-wheel drive versions, which feature an electric motor at each end of the car, with torque applied independently to each axle. An AWD Mustang Mach-E with the base 76kWh battery has a 260 mile range, but ideally you'd want to stretch to the extended-range four-wheel-drive version, which puts out 332bhp, 565Nm of torque, will get you to 62mph in under seven seconds and has a 335 mile WLTP range. If you want more, you can talk to your dealer about a performance-orientated Mustang Mach-E GT model, which puts out 459bhp and 830Nm of torque and makes 62mph from rest in under five seconds. That top version comes with MagneRide adaptive damping. You might need that set-up too because, as with most Evs of this size, kerb weight is substantial, in this case between 1,993 and 2,218kgs depending on variant. 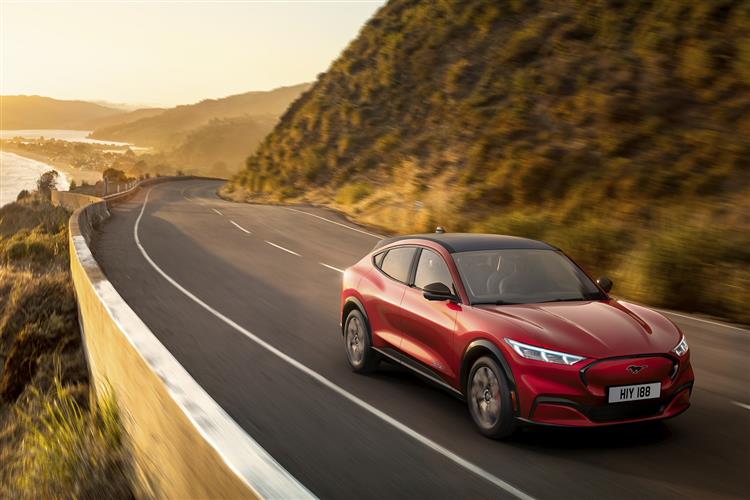