THE RSUV (some text hidden)

Audi's RS badge gives its Q3 SUV a shot in the arm. Jonathan Crouch drives it.

If you crave a small SUV with super sportscar-style performance, then Audi thinks you'll like this RS Q3, offered in both standard and stylish Sportback forms. This is the quickest you'll probably ever want to go in any kind of SUV - and there's an emotive soundtrack too. If you've outgrown hot hatches, don't need a huge amount of interior space and want something very rapid that's fashionable yet practical, then this RSUV might be just what you're looking for.

The very first Audi SUV to get the brand's full-sporting RS treatment was this one, the RS Q3. The original model was launched back in 2013 and started what is now a growing trend for high performance compact SUVs. It featured then - and features now - the brand's classic 2.5-litre five cylinder turbo petrol engine borrowed from the company's TT RS sports car. But whereas in the original RS Q3, that unit put out 340PS, it now develops 400PS. That extra power is needed to take on cars like the Turbo and GTS versions of Porsche's Macan, BMW's X3 M40i and the Mercedes-AMG GLA 45. Plus potential buyers may also be looking at cars like the Volkswagen T-ROC R, the CUPRA Ateca and the BMW X2 M35i. To give the RS Q3 the widest possible appeal in this company, Audi is offering it with two body styles - this standard Q3 shape and the alternative sleeker RS Q3 Sportback variant.

There's no doubt about it: this RS Q3 feels ballistically quick. And is on paper too. A rest to 62mph sprint time of just 4.5s en route to as much as 174mph puts this car on a par with the far pricier Porsche Macan Turbo. And you can access quite a lot of this performance in all kinds of conditions thanks to this RS model's use of the latest version of Audi's quattro 4WD system which is mated to a 7-speed dual-clutch S tronic paddleshift auto transmission. This car's 2.5-litre 400PS five cylinder powerplant has always been one of Audi's more charismatic units and has a wonderfully emotive roar as it revs up towards the 7,000rpm red line. Sadly though, the addition of a petrol particulate filter means that you lose much of the exhaust pop and crackle on downshifts that you used to get with the previous generation version of this model. Even if you pay extra for a version with the rortier switchable-flap RS exhaust system. You get two customisable RS driving modes (and a steering wheel button to swap between them) which alter throttle response, steering feel and, if they've been fitted, the settings of the adaptive dampers. 'Dynamic' is the red mist option, but you'll find its settings too firm for everyday use. Audi claims that 85% of the engine's torque can be sent to the rear axle, which sounds like a recipe for fun. In fact though, the drivetrain is primarily a front-driven system - and feels like it when you hustle the car through the corners. This - and the fact that the precise, direct 'Progressive' steering lacks that last enth degree of feel - mean that this car is more about meteoric point-to-point progress that driver engagement. 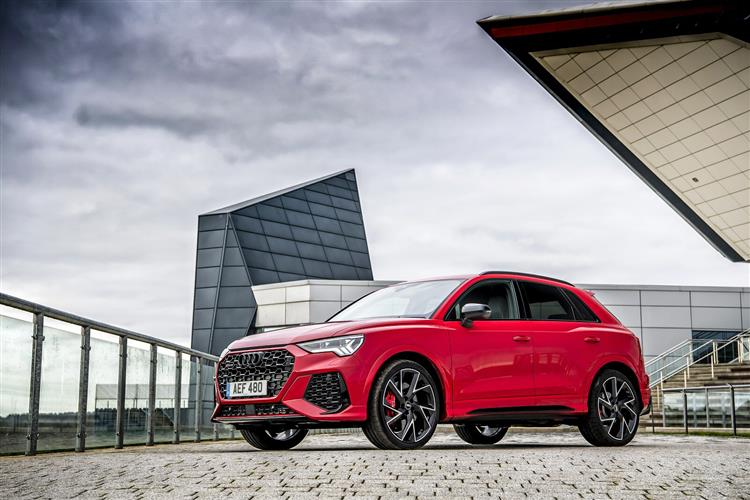