KING OF THE HILL (some text hidden)

The Land Rover Defender has been revitalised for the modern era. Jonathan Crouch takes a look.

The new-era Land Rover Defender brings the design of this legendary Solihull model bang up to date. Despite the modern tech, it remains as solid and uncompromising as it's always been, with off road ability to worry a Challenger tank. Approach it as an alternative to modern luxury SUVs and you've missed the point. Buy a Discovery for that. Here instead, is the hardest wearing, most capable and most cost effective proper off-roader that sensible money can buy.

You may have forgotten what a real Land Rover is - and what it looks like. These days, we associate the Solihull maker with lifestyle SUVs and Range Rover products. Rather than the kind of farm working 4x4 that Maurice Wilks developed for agricultural use back in the Forties. There are still some people who feel that this is exactly what a true off-roader should be. It shouldn't feel like a car on stilts. It needs to be rugged, practical and offer a number of field-serviceable parts. Is that what we have here? Everything has been changed to differentiate this modern era Defender from the Land Rover original - but ultimately, nothing is really very different. Thank goodness for that.

Engine-wise, the range is fundamentally built around an in-line six cylinder Ingenium MHEV mild hybrid diesel engine. It's offered in three forms - the D200 (with 200PS and 500Nm of torque), the D250 (with 249PS and 570Nm of torque) and the D300 (with 300PS and 650Nm of torque). The D300 powers to 62mph in 6.3s. If you want efficiency but don't want to fuel from the black pump, there's also a P400e Plug-in Hybrid option with the longer 110 body style. This PHEV variant uses a 2.0-litre four cylinder petrol engine with 300PS mated to a 105kW electric motor powered by a 19.2kWh battery, this combination producing a combined 404PS output and offering an all-electric driving range of 27 miles. There are also three conventional petrol options, the 300PS P300, the 400PS P400 variant and a 525hp supercharged V8. 8-speed auto transmission is mandatory across the range. Land Rover insists that this new-era Defender is even more capable than its predecessor, despite the fact that, unlike that previous model, there's no hard core separate chassis or rigid axles. Instead, the architecture is fundamentally the same as that which features on the current Discovery, Range Rover Sport and range Rover modes. But it rides on reinforced suspension with greater travel and there's more ground clearance too. Both coil springs and air suspension are available. As you'd expect, there's permanent 4WD, along with a Terrain Response system allowing you to set the car up for various driving conditions (or you can simply select an automatic setting and let the Defender handle everything for you). Both body shapes have impressive mud plugging stats; an approach angle of 38-degrees and a departure angle of 40-degrees. It can climb a 45-degree slope and descent a 47-degree one. And it'll wade through water up to 900mm deep. Try doing that in your lifestyle SUV. 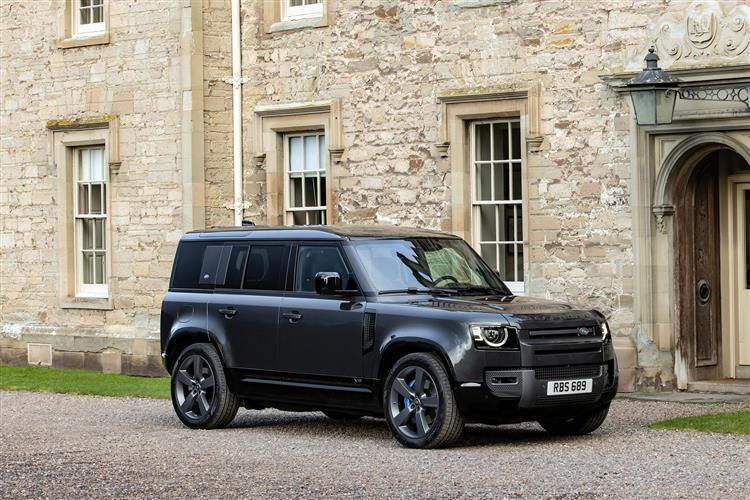