The Ford Puma looks an interesting package for buyers in the small SUV segment searching for something a little more fun. Jonathan Crouch takes a look.

Ford finally gets really serious about the small SUV segment - in the shape of this charming little Puma model. It champions mild hybrid tech and doesn't have much time for SUV conventionality. All of which will suit its fashionable band of potential buyers just fine. Frugal, fun and well connected, it fits with the spirit of its time. Just as the original Puma model did.

You might just remember the Ford Puma - but you won't remember it like this. The much-loved original Puma was a little coupe made just after the turn of the century, but cars like that just don't sell any more, so this model line has rejuvenated itself as what Ford calls an 'SUV-inspired Crossover'. Like the original Puma, it's based on Fiesta engineering and is primarily powered by the mild hybrid 1.0-litre EcoBoost petrol engine the Blue Oval brand has also ear-marked for that supermini. Dynamic changes over the Fiesta include a new setting for the electronic power steering, a stiffer attachment for the beam axle and five-stud hubs for a more rigid fixing of the wheels. All of which should mean that this car handles a little more sharply than direct class competitors like Nissan's Juke and Renault's Captur.

From a handling perspective, we can very much expect the Puma to be a Crossover first and an SUV second. Or to put it another way, it'll handle far more like a good supermini than a typical Juke or Captur-class contender. The big engineering interest here lies in the 48V mild hybrid powertrain, which in this case is based on Ford's familiar 1.0-litre EcoBoost petrol engine. Here, a conventional alternator is replaced with an 11.5kW integrated starter/generator (called a 'BISG'). The resulting powerplant is available in either 125 or 155PS guises, the more powerful version available with a 7-speed dual-clutch auto gearbox. Like most mild hybrids, Ford's 'BISG' set-up works in a couple of ways. Either it can be used when coasting or braking to recover energy (which then gets stored in a small lithium-ion battery); or it can assist the engine during acceleration. The brand says that extra electrified assistance has enabled it to lower the engine's compression ratio and fit a larger turbocharger - which all sounds pretty promising for those in search of perky performance. 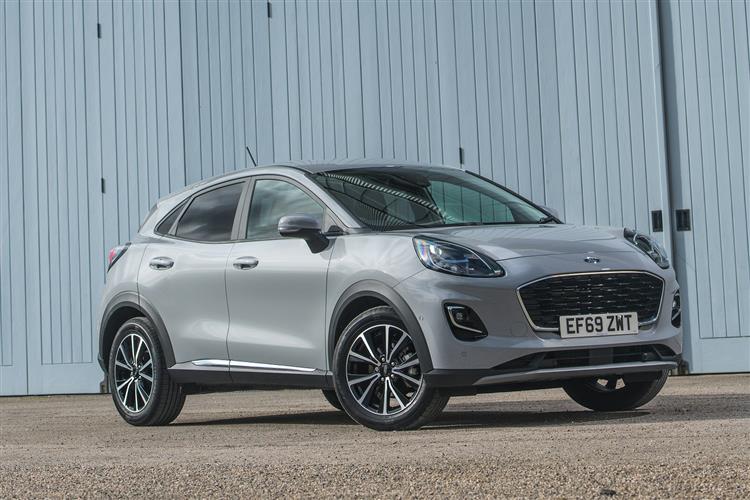