The CLA Coupe - a rather different kind of Mercedes. This second generation version, like the model that inspired it, is compact and coupe-like, yet has four doors and a decent boot. And it'll set the neighbours talking far more than if you simply bought yet another mid-sized German-badged executive saloon. It's a model to challenge your preconceptions, that's for sure.

Never underestimate the power of emotional appeal. It's brought us cars like this one, this second generation Mercedes CLA Coupe. We first saw the original version of this four-door coupe in 2013, that design followed by an equally trendy 'Shooting Brake' estate version a couple of years later. This replacement continues in much the same vein: so it's A-Class-based, which means that it's front-driven - unlike the kind of Mercedes C-Class saloon you could buy for very similar money. A C-Class would give you much more rear seat room and boot space, but a CLA will make a much more overt car park statement - which for its intended audience will be all that really matters. This MK2 model is a little bigger and much more sophisticated than its predecessor. And, as before, it comes in the four-door Coupe form we're going to look at here - or in 'Shooting Brake' estate guise.

Mercedes markets this car as a 'sporty' alternative to its more conventional C-Class saloon. The CLA Coupe's sporty styling leads you to expect that. Though this car shares its chassis, steering and braking architecture with A and B-Class models, it does get its own suspension set-up, with various changes made to improve comfort and make it a bit less crashy over poorer surfaces. There's torque vectoring to help with the handling and 'Direct Steering' to sharpen things up at the helm. The range kicks off with CLA 180 and CLA 200 variants that both use a 1.3-litre petrol engine co-developed with Renault and are respectively capable of producing either 136hp and 200Nm of torque or 163hp and 250Nm. There's also a plug-in hybrid, the CLA 250e, which uses a 1.33-litre engine mated to a 15.6kWh battery with a system output of 218hp and an all-electric driving range of up to 49 miles (NEDC). Beyond that lies another petrol-powered front-driven variant, the CLA 250, which uses a 2.0-litre engine and can generate 224hp and 350Nm. You can also talk to your dealer about a 190hp diesel-powered CLA 220d variant. All petrol models use a 7G-DCT seven-speed automatic transmission (it's an 8-speeder in the diesel). There are also two high performance Mercedes-AMG 2.0-litre turbo petrol models, the CLA 35 4MATIC (with 306hp) and the top CLA 45 S 4MATIC+ (with 421hp). 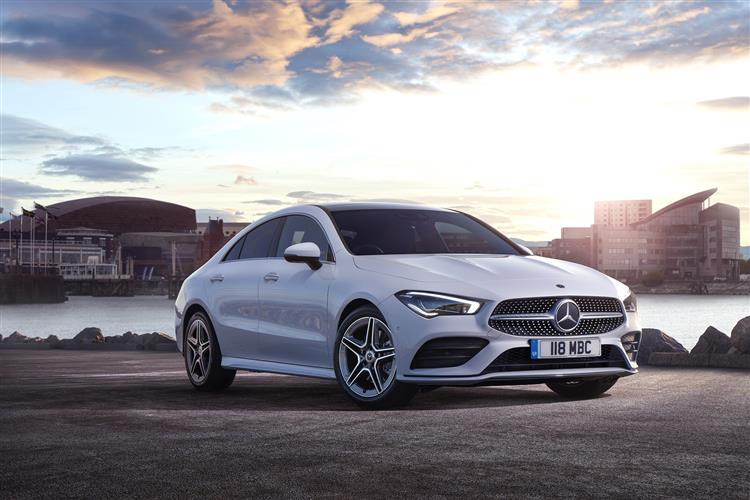