THE A35 - A MORE DIRECT ROUTE (some text hidden)

The A 35 is now the entry-level model from Mercedes-AMG. Jonathan Crouch reports on this enticing hot hatch.

With all-wheel drive and a potent 306hp power output, the AMG-engineered A 35 4MATIC hot hatch will give its brand a stronger presence in the core part of the hot hatch segment. If you want a very quick hatchback that can do almost everything, is this where you should start your search?

Mercedes became credible in the hot hatch segment back in 2013 when it announced the AMG-engineered A 45 4MATIC, offered first with 355hp, then later with 381hp. The only problem was that in terms of power and price, this car sat rather above the core part of the hot hatch segment, the faster part of which is represented by cars like the Audi S3, the Volkswagen Golf R and the Honda Civic Type-R, all of which campaign with around 310-320hp. When the fourth generation A-Class model was launched in the Spring of 2018, Mercedes decided it would offer a broader-based offering to hot hatch buyers. The A 45 would be retained (with over 400hp) for folk in search of a super hatch, but core sales would be garnered by a new derivative - the one we're going to look at here, the 306hp A 35 4MATIC.

Of course, there will be some who accuse Mercedes of little originality. A small, expensive, German hatch that directs over 300bhp through all four wheels is, to many, an Audi S3 or a VW Golf R. That may well be the case, but if there's one thing that Mercedes has discovered in its competition with its German premium brand neighbours, it's that there's usually space in any given market for several manufacturers, as they all have different buyer profiles. This A 35 is a niche sell for sure, but that's only because of its price. Any petrolhead worth their salt would want to get behind the wheel of this one. It's technically intriguing. The engine seems to be a slightly re-fettled version of the four-cylinder powerplant that's found in the humbler A250 model, but much has been changed to reliably achieve that 306hp power output and 400Nm of torque. Power goes to all four wheels via a 7G-DCT 7-speed automatic transmission and the A 35 can accelerate from 0 to 62 mph in 4.7 seconds (about the same as the original version of the A 45 could manage). Buyers get much the same 'DYNAMIC SELECT' driving modes system as you'd find in the AMG-GT sportscar, with "Comfort", "Sport", "Sport +" and "Individual" settings. The AMG 4MATIC all-wheel drive system directs up to 50 per cent of torque to the rear wheel to ensure a playful bias to the car's handling and guarantees a rapid getaway. 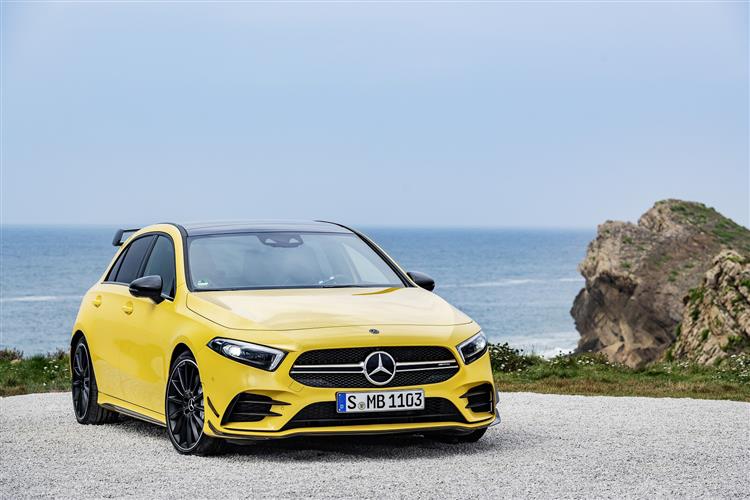